Home » Cleveland Browns » The 2021 NFL draft signifies a new day, and not just for the host city of Cleveland 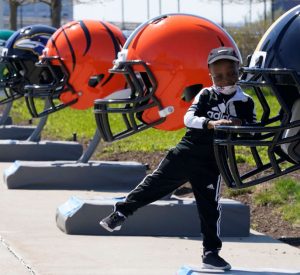 CLEVELAND — They were installing the final pieces of fencing and setting up the last of the picnic tables downtown here on Wednesday afternoon, all in preparation for the NFL draft that begins Thursday.

Originally, bringing the big show to Cleveland was considered a nod to this old football town and its loyal-in-the-face-of-football-failure fan base. Without a domed stadium — let alone the kind of glamorous nightlife the NFL loves — a Super Bowl is never coming here.

“This is the next best thing though,” said fan Jim McIntyre of nearby Fairview Park, who wandered over to take in the lakefront setup that sits between the FirstEnergy Stadium and the Rock and Roll Hall of Fame.

Now it feels like more, much more. Not just because the Browns are coming off an actual winning season, but because this entire night, this entire scene, will also serve as a symbol of America’s slow return to post-pandemic normalcy. It is likely the biggest planned outdoor gathering since COVID shut things down 14-plus months ago.

The NFL says it is expecting 50,000 fans a day over the three-day event — which includes three different viewing areas and the NFL Experience. It’s likely many thousands more will be in the general downtown area, where streets, parks and sidewalk bars are expected to be packed.

“It shows we’re getting out of the pandemic,” said fan Hoov Hoover of Middleburg, who was downtown with his wife, Cindy. Both plan on returning Thursday, rain or shine.

© Provided by Yahoo! Sports
Hope springs eternal at the 2021 NFL draft, which will feature thousands of fans and a sense of reopening. (AP Photo/Tony Dejak)


“We can breathe again,” said Cindy, who works in health care. “Sports carried us through the pandemic, now sports is leading us out of it.”

Some restaurants that shuttered until recently were stocking up this week. Others were trying to maximize outdoor areas in an effort to capture lost revenues. Downtown Cleveland isn’t full of residents, it relies on office workers and sports fans to drive the economy. Both have been in short supply.

The only fear is rain in the forecast for Thursday’s Opening Night, a potentially disappointing twist to a football town that knows all about disappointments.

Either way, the NFL is back. Planned or not, that’s the message. This looks mostly like it would have if COVID-19 had never existed.

The league never really left, of course. It ran its 2020 calendar mostly on schedule — there were a few postponed games, but for the most part it was a huge success. Not that it was ideal. The stands were mostly empty, the draft was virtual and even the Super Bowl lacked the feeling of a truly big event.

That changes Thursday. A select crowd of 5,000 — wearing masks — will be around the stage, but otherwise this is a show of force, with tens of thousands of others scattered all about.

Yes, this is just football — and a draft at that — but the league is the nation’s most popular entertainment entity. Since moving the first round to prime time on Thursday, television viewership has routinely topped 10 million (a record 15.6 million watched a year ago).

The collective experience of seeing throngs of fans, top picks hugging Goodell in celebration (the Commish is vaccinated, per the league) and at least something that resembles the wild scenes from Philadelphia (2017) and Nashville (2019) should matter.

Yes, there have been sold-out crowds for Major League Baseball games and UFC cards, but this is the NFL. This is national.

“When they first announced that Cleveland would be hosting the draft, I thought it was a token to the city,” McIntyre said. “Now that I see the whole set up, it’s an honor.”

A year ago commissioner Roger Goodell had to host the draft from his “man cave” basement. The NFL did what it could. Now his chair — which became famous on the broadcast — has been flown to Cleveland as a sort of reminder of how far everyone has come.

“It’ll probably end up in the Hall of Fame,” Hoov Hoover said.

Most of the Browns fans milling about Wednesday were just excited there was something to be excited about — and not just that their team had a good pick. For years, the draft was the biggest day of the year for them. When Hollywood wanted to make a film about the NFL draft, it set “Draft Day” in Cleveland. Of course.

Coming off an 11-5 season that included a playoff victory in Pittsburgh though, the Browns don’t even pick until No. 26.

“This is usually our Super Bowl,” Hoover said. “Now we are looking at the real thing.”

About all anyone is talking about around here is the 2021 season. It’s not like they haven’t earned it.

After that winless season, fans staged a mocking parade downtown in the shape of a zero. (“The no victory lap,” it was dubbed.)

“We used to make fun of him,” laughed Jeff’s wife, Marlene. “We said he’d be so old by the time the Browns made the Super Bowl that he wouldn’t understand what we were talking about. ‘Soup in a Bowl?’ Now we have hope.”

The Browns do. Downtown Cleveland as well, at least for this big weekend. Maybe the whole country, as vaccines continue to pour into arms everywhere.

The pandemic isn’t done, but the parties have begun. Might as well start with the NFL throwing one in the streets of Cleveland, where dreams of a Super Bowl aren’t a joke anymore.

If that doesn’t suggest that a new day has arrived, maybe nothing can.