Home » Cleveland Browns » Why the Browns should draft a quarterback within the top 100 selections of the 2021 NFL Draft: Ellis L. Williams 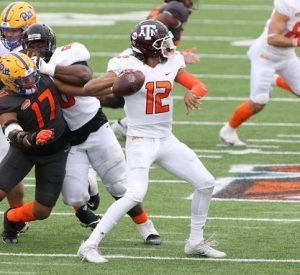 “Baker Mayfield is the undisputed, unrivaled, undoubted and all-or-nothing leader of the Cleveland Browns.”

That won’t change. What I’m about to suggest will not alter that fact. Mayfield was excellent in 2020. He should be so again this season. Which is why me suggesting the Browns should draft a quarterback within the top 100 selections of the 2021 NFL Draft actually has nothing to do with Baker.

It’s about building a cap-efficient quarterback room while maximizing the upside of every player in it. Case Keenum remains a quality backup. If Mayfield missed games, Keenum could win some. But he’ll make nearly $8 million this season. That’s 22nd most and more than Josh Allen (duh), Andy Dalton and Cam Newton.

I’ll put it this way. If Sheldon Richardson signs elsewhere for near or around $ 8 million, I’ll tilt my head sideways. Plus, backup quarterbacks are assets. There would be no threat to Mayfield’s job while Alex Van Pelt and Kevin Stefanski groomed Keenum’s successor.

Now that I’ve convinced you, let’s explore three quarterbacks outside the “Big 5″.

Kellen Mond (Texas A&M), Davis Mills (Stanford), and Kyle Trask (Florida). One is too NFL ready to back up Mayfield. The other doesn’t provide the upside worthy of a Day 2 pick. While one fits the Browns just right.

Why Kellen Mond is too ready for the Browns

After Trevor Lawrence, Zach Wilson, Justin Fields, Mac Jones, Trey Lance are gone, the fight for QB 6 begins. I think Mond will be selected anywhere from mid-second round to early third. In fact, with the Browns picking so late in Round 3, I’ll be surprised if he’s available without GM Andrew Berry trading up.

After watching his tape, he isn’t worth that kind of move. Mond started 44 collegiate games. His stats rock. (Side note: if you are a draft prospect, there is a good chance your college stats are incredible. From an evaluation standpoint, stats don’t matter. Scouts and GMs don’t really care about the on-field numbers, as long as they are “good.” Because everyone has numbers at this point.)

Mond plays tall in the pocket and drives the ball with pro-level velocity. His deep ball impressed me. He’ll hit a deep post (Cover 4 beater) on a 60-yard rope that has just enough touch. Sometimes he wastes steps in the pocket. His drops get inefficient and slow down some releases.

Also, he looks quite stiff. I worry his 4.5 speed won’t translate to consistent Sunday playmaking. But of these three quarterbacks, he’ll be the readiest Day 1. Largely because of his near 50 starts and the culture he transformed at Texas A&M. He led throughout the transition between Kevin Sumlin to Jimbo Fisher.

Watching Trask’s tape underwhelmed me. I didn’t see him create much outside the reads of his offense. Which is fine but that doesn’t signal upside. Trask appeared sound and comfortable making presnap calls. I noticed a few times he made protection checks (some were wrong) but he still handled that responsibility.

But as a thrower, he releases a lot of his balls late and away from his receiver’s body. I think some false steps in his dropback delay his throws. He’ll climb the pocket very well but his accuracy dips when he isn’t set.

After thinking of all this, I read one report that compared him to Mason Rudolph.

Which means … I moved on to Davis Mills, who had wonderful tape.

Mills provides a perfect blend of upside and project, making him ideal to backup a young veteran quarterback. Though raw, he reads the middle of the field well. His timing for crossing routes and deep overs should excite.

His shoulders move firmly as he progresses through his reads. I honestly see shades of Peyton Manning with his upright stature, yet fluid and crisp style. Go watch some Mond plays then watch Mills. They both play upright, but Mills looks natural back there.

Such language is one of the hundreds of things that make evaluating quarterbacks so difficult. I cannot quantifiably prove Mond’s rigidness compared to Mills’s smoothness. But I see it, and therefore I trust it.

There is one glaring hole in my “the Browns should draft a Round 3 or 4 quarterback” theory. All three of these quarterbacks could be drafted in Round 2. Or perhaps one or two fall. There is no way to know until Friday.

Remember, No. 2 quarterbacks are assets and should hold value on the field and in trade talks. Keenum remains a top-half backup. However, he isn’t worth a pick on the market. While Mills could pull a second-rounder (or better) in a few years.

To avoid an Eagles situation, Mills provides little fanfare coming out of Stanford. His star doesn’t compare to the national figure (and winner) Jalen Hurts was before Philadelphia.

Again, I don’t think this happens. Though the front office and locker room could handle Berry doing so.

Before we go, let’s imagine they do select a Round 3 quarterback. Twitter reacts. My colleagues start writing. And I shout,

“By gawd! Is that Davis Mills music?!”