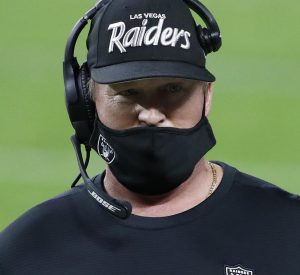 The Baltimore Ravens, Las Vegas Raiders and Cleveland Browns are among the teams that could potentially look to trade up in the 2021 NFL draft.

Albert Breer of Sports Illustrated reported each of the three teams has expressed some level of interest in moving draft positions ahead of Thursday night’s first round.

The Ravens have the Nos. 27 and 31 selections and might be in the best position to move up after trading Orlando Brown to the Kansas City Chiefs. The Raiders currently select No. 17 in the first round and have extra third- and fifth-round picks they could use, along with future selections. The Browns have extra picks in Rounds 3 and 4, along with the No. 26 overall selection in Round 1.

The Ravens could look to target a wide receiver for Lamar Jackson with Marquise Brown struggling to make an impact his first two NFL seasons. Baltimore moving up into the top 10 to target Jaylen Waddle or DeVonta Smith would make sense.

The Raiders and Browns are more likely to focus on the defensive side of the ball, with cornerback a major need in Las Vegas and several defensive spots a potential focus in Cleveland. The Browns could find themselves targeting Micah Parsons if he falls into the 12-15 area, or could look into acquiring Patrick Surtain II or Jaycee Horn.

Surtain and Horn are likewise potential targets for the Raiders.