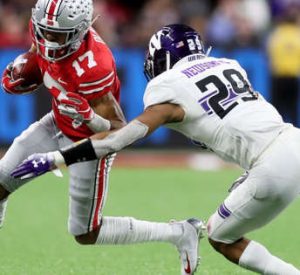 CLEVELAND, Ohio – It has been 29 years since the Browns last had a player with Newsome on the back of his jersey. That was safety Vince Newsome, who played the final two seasons of his career (1991-92) with the Browns.


Vince showed up one season after Ozzie Newsome retired following 13 seasons with the Browns, during which time he put together a Hall of Fame career.

Now the next in line has arrived in Northwestern cornerback Greg Newsome II with the 26th pick Thursday night. What are the Browns getting in the 20 year old from Chicago? Here are three things to know.

1. HE’S AN OUTSIDE CORNERBACK

One of three things could happen with Newsome in 2020. He could sit behind Denzel Ward and Greedy Williams and learn the NFL. He could battle with Williams for a starting spot opposite Ward. Or he could be the safety net if Williams isn’t able to return to form after a shoulder injury cost him the 2020 season.

One thing that probably won’t happen is Joe Woods putting Newsome at slot corner. The Browns signed Troy Hill in free agency to handle that spot, and Newsome comes to the Browns with very little experience there, anyway.

Newsome had 353 snaps at outside corner in 2020 and just five in the slot. That’s about the same ratio he experienced his first two seasons at Northwestern.

2. HE DOESN’T GET BEAT DEEP

According to Pro Football Focus, Newsome was targeted 15 times on passes of 10 yards or more last season. He gave up one catch, had one interception and a passer rating against of just 11.8.

On targets of 20 yards or more, he allowed no catches on seven targets and had three forced incompletions.

3. HE PLAYED ONLY 21 COLLEGE GAMES

Newsome’s durability has come into question during the draft process. He missed at least three games each season due to injuries, including eight as a freshman. He lasted only 17 snaps against Ohio State last season before leaving the Big Ten title game with a groin injury.

Now he joins a cornerback room with Ward, who has missed at least three games in each of his pro seasons, and Williams, who missed four games in 2019 before sitting out the entire 2020 season.

Newsome II: What they’re saying about the new cornerback

Who are the best available players in the Top 300 after Day 1?

CB Greg Newsome II selected at No. 26 by the Browns

Browns get what they need in Newsome: Pluto

Grade the selection of Newsome in the first round

How the Browns can win NFL Draft 2021: Cabot

Draft tracker: Live pick-by-pick results, news and notes from Round 1

Browns’ most important draft pick this century was three years ago: Pluto