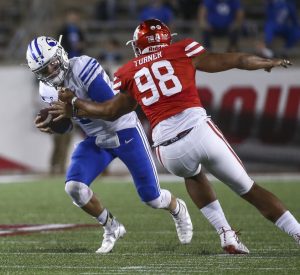 The 2021 NFL Draft is finally here and the one prediction I’m making for the Cleveland Browns is they will pick Payton Turner, the edge rusher from Houston. Whether that’s at the 26th pick, after trading down or trading up from one of their other picks, he’s a player that I believe the Browns want to find a way to get from this draft class.

Turner has both the production and athleticism the Browns seek at a position they value highly and fits in terms of making a good investment for the future, but does help them now.

At 6’5 1/2″ 268 pounds, possessing 35 3/8″ arms, Turner fits into the mold of defensive linemen that can play up and down the line, which the Browns have leaned into this offseason. The Browns have Myles Garrett, Jadeveon Clowney and Malik Jackson, who can all play anywhere up front.

Turner’s incomplete athletic profile makes it difficult to fully project him going forward. He was unable to test the 40 or his broad jump at his Pro Day due to turf toe. Nevertheless, his 35.5″ vertical is an excellent indicator of explosiveness.

The real selling point is Turner’s agility. The next edge rusher with a recorded 3-cone over 7.1 that becomes an All-Pro will be the first. Turner had a 7.01 3-cone. Measuring hip flexibility and balance, Turner can bend around the corner and keep his feet in the process.

On tape, that becomes tangible with Turner’s ability running the arc, He’s remarkably light on his feet with impressive change of direction skills, making it difficult to get away from him and keeps him alive in a ton of different plays.

He’s got enough strength to make use of those long arms which can enable him to create lanes to the ball carrier. It also helps him as a run defender, making him more difficult to get around, allowing him to protect the second level of the defense, which is critical for what Joe Woods, the defensive coordinator, wants to accomplish.

It’s not difficult to imagine a situation where the Browns have Jadeveon Clowney and Malik Jackson on the interior with Myles Garrett and Payton Turner or Takkarist McKinley attacking off the edge.

With as much pass rushing as the Browns plan to do this season, they cannot have too many talented options to stay fresh and maintain pressure against teams like the Kansas City Chiefs and Buffalo Bills. The Browns play the Chiefs in the regular season, but they may need to go through one or both in the postseason.

Both Clowney and McKinley are on one-year deals, so if they let one or both of those players walk after this season, the Browns get significantly more cost efficient at defensive end. Garrett and Turner as a duo for the foreseeable future could be a really enticing pairing for the Browns.

Turner needs to improve his pad level, staying low more consistently. Too often he will end up exposing his chest or when he’s going around the opponent, stand up and make it so he can be knocked off balance.

Some may want to knock him for the fact he only had one terrific year and he only played five games in that season. Aside from BYU, the level of competition he faced wasn’t great.

It does help that Turner went to the Senior Bowl and was effective against better competition. There, he played almost exclusively on the interior, which helped show just how viable he is there. His pad level was better in that venue.

Increasingly, the notion of taking him 26th overall looks viable. Much of that is simply looking at some of the players that mock drafts have going to the Browns, including any linebacker or a player like Joe Tryon from Washington.

Tryon is a nice player with some potential, but Turner looks better right now and has more agility at a higher weight, suggesting he has more upside in the future as well. Turner also seems like the better fit for what the Browns want to do given his size.

In terms of evidence, Turner ends up beating out Gregory Rousseau from Miami(FL). Better athletic profile, though a little older. Rousseau requires a little faith and projection than Turner does, even though his tape from 2019 is excellent.

The other reason Turner looks like he could be a real option at 26 is there seems to be a tier of talent that extends from around 20 to 50, where there isn’t a gigantic difference in talent. If the Browns have a similar view, it wouldn’t be difficult for them to have Turner at or near the top of their prospects. If the board falls as it could and the Browns love Turner, they may just want to go ahead and grab him.

The fact this draft is not as talented as other classes makes it more rational to really focus on getting the best player available and to go get the players a team is targeting. It’s not the best year for a team to let the board come to them with every pick and the Browns have enough draft capital to move up the board if needed.

Whether it’s Thursday or Friday, I predict Payton Turner will be a Cleveland Brown.

READ MORE: X-Factor to Watch in the 2021 NFL Draft, Impact on the Cleveland Browns