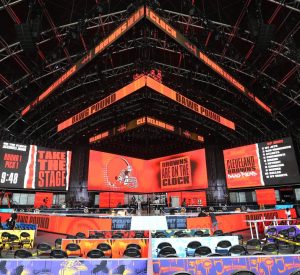 CLEVELAND, Ohio — The Browns are so ready for the NFL Draft and so organized, that GM Andrew Berry’s wife Brittan even had their third child, Eden Ruth, at 8:10 a.m. Thursday — eight hours before the start of the draft.

It enabled Berry to not only be there for the special delivery, but to run the draft Thursday night from Browns headquarters in Berea, and to be front and center to make the No. 26 overall pick. The question is, what will the Browns do with that pick?

Will they stay put and make the selection? Trade up? Trade back? All of those things are possible, and Berry won’t know until sometime after 9:30 or so how the draft is unfolding. The Browns have nine picks in the draft, including two in the third round and two in the fourth.

Here are some ways the Browns can win the 2021 draft:

1. Land a cornerback early on

The Browns won’t draft for need, but if “best available player’’ lines up with a future starting cornerback, they’ll come out of this draft in great shape. The Browns are hoping Greedy Williams can return from the season-long nerve damage in his shoulder, but they must have solid backup. What’s more, they were looking for Williams to take a big step up in his second season anyway, so some competition at the position will make everyone better.

Virginia Tech’s Caleb Farley is arguably the most talented cornerback in this draft, or at least pretty close to Alabama’s Patrick Surtain, but he’s had two back surgeries since he last played in 2019. That’s an enormous risk for the Browns considering that Williams and safety Grant Delpit (ruptured Achilles) both missed all of last season.

If not for the two disc surgeries and a torn ACL in 2017, Farley would be an easy choice at 26. He’s got good size (6-2, 197), blazing speed, excellent ball skills (four interceptions in 11 games in 2019) and great instincts. He’s got fantastic closing speed, and aggressively swats the ball away or picks it off. He’s everything you’d want in a shutdown cornerback if healthy.

Farley, who opted out in 2020 because of COVID-19 concerns and to prepare for the draft, expects to be ready for training camp, but no one knows exactly how he’ll come back from this latest procedure.

If the Browns don’t have the stomach for the medical risk, they might opt for Northwestern’s Greg Newsome instead.

Newsome (6-0, 192) doesn’t have Farley’s height, but he’s also got great speed (4.38), ball skills and rarely gets beat on the deep ball. He played only six games in the shortened 2020 season, but flashed starting pro cornerback ability, making 12 tackles, one interception and a team-high 10 pass breakups. If necessary, he can start opposite Denzel Ward this season.

If the Browns go in another direction in the first round, the can try to grab one of the two excellent, speedy Georgia cornerbacks in the second round, even if it takes a trade up to do so. That’s Eric Stokes (6-1, 194) and Tyson Campbell. Stokes ran a 4.28 at Brandon Marshall’s NFL Combine event, and Campbell has been clocked at 4.38.

Stokes led the SEC with four interceptions and returned two for touchdowns. And of course, it never hurts to play in the SEC, which the Browns love. In 2020, three of Berry’s top four picks came out of the SEC: Alabama’s Jedrick Wills Jr. at No. 10 in the first round, LSU safety Grant Delpit at No. 44 in the second round, and linebacker Jacob Phillips at No. 97 in the third round.

2. Draft a hybrid linebacker in the first or second round

There are some excellent ones who could be available to them in the first round.

The teams I’ve talked to have Tulsa’s Zaven Collins (6-5, 259) projected more as a linebacker than an edge-rusher in a 4-3 defense, so he fits the bill here. The problem with Collins is that evaluators tell me he probably won’t get past No. 16. It’s no wonder: he finished 2020 with 53 tackles including a team-high 11.5 for a loss, four sacks, four interceptions and a blocked kick in only eight starts. He seems like a Steelers kind of guy, but he probably won’t even last until 24. The Browns would probably have to trade up for him if they love him.

One very intriguing prospect is Notre Dame’s Jeremiah Owusu-Koramoah, the 2020 Butkus Award winner. “JOK” is the prototypical linebacker of the future: a versatile player who can double as a big safety and excel in coverage. A three-down backer, he’d be one of the two to remain on the field in sub-packages. He can blitz, cover tight ends and slot receivers, and has a nose for the ball. In two seasons as Notre Dame’s starting rover, he tallied 142 tackles, 13.5 for a loss, seven sacks, he three forced fumbles, and interception, and fumble return for a TD.

He’d be perfect for Joe Woods’ defense, and he’s exactly the kind of dynamic, playmaking linebacker the Browns need. It would be hard to pass on him at No. 26 if he slips that far.

Another excellent hybrid prospect is Kentucky’s Jamin Davis, who NFL Network’s Daniel Jeremiah has the Browns taking at 26.

“Davis is a tall and lanky off-the-ball linebacker,’’ Jeremiah wrote on NFL.com. “He has excellent eyes to key, read, fill and finish. He uses his quickness to beat blockers to spots. He is much better working around blocks than taking them on, but he has outstanding lateral range, and his eyes give him a jump-start. He has stopping power as a tackler in the hole, and he really excels against the pass…. Overall, Davis lacks some strength to bang versus blockers, but his speed and playmaking ability jump off the screen. He should be a Day 1, three-down impact player at the next level.’’

3. Don’t hesitate to take a receiver in the first round if he’s the top-rated player

It’s time to start planning for life after Jarvis Landry and Odell Beckham Jr., who will both be turning 30 during the 2022 season and are due to make a combined $31 million again next year. That’s why they’ve looked long and hard at several of the first-round receivers who could be there for them at No. 26.

They include players such as Minnesota’s Rashod Bateman, Ole Miss’ Elijah Moore, and LSU’s Terrace Marshall.

Never mind that the Browns already have a surplus of receivers. If they opt for one of these, he’ll play early and often, with the Browns likely playing a lot more three wides this season.

He could learn from Beckham in 2021, and then try to fill his shoes in the future.

Marshall is a big target (6-3, 205) with excellent speed who can play inside and out. Like most other LSU receivers, he’ll come ready to play and produce out of the box. He started the first seven games of 2020 and led the team with 10 TDs before he opted out for the rest of the year.

If the Browns don’t draft a receiver in the first round, they should find one in the first three rounds of this deep-receiver class.

4. Draft a running back to learn from Nick Chubb and Kareem Hunt

The Browns not only need a good third running back, they also need to think ahead at the position. Chubb, who’s heading into the final year of his contract, will likely either be extended or franchised, but the Browns still need some depth at the position and a plan for the future. Hunt’s contract is up after next season. A running back can learn from these two while preparing to take on more of the load down the road.

One excellent prospect in the third round is Memphis’ Kenneth Gainwell (5-8, 201), who opted out in 2020. He was super-productive in 2019, rushing for 1,459 yards and 13 TDs, and catching 51 passes for 61 yards and 3 TDs. North Carolina’s Michael Carter, an elusive, shifty back with good hands, could also be there with one of the Browns’ third-round picks.

Rumors and reports: Smoke signals on Garoppolo and Farley

Why Browns should draft a QB within the top 100 selections: Williams