Home » Cleveland Browns » Which Browns game is the most anticipated of the 2021 schedule? (poll) 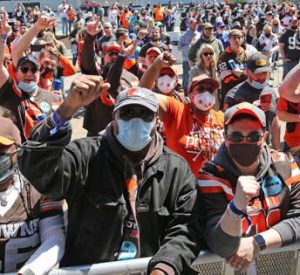 CLEVELAND, Ohio – Is it the Chiefs in Week 1? Is that the most anticipated Browns game of the 2021 season?


A rematch of last season’s divisional round playoff game to kick off the season seems like something a lot of Browns fans would look forward to. But the Browns’ 2021 schedule has plenty of enticing matchups.

The home opener is always a big hit with fans, and that’s in Week 2 against the Texans. Maybe you’re a die-hard who is always going to say the home game against the Steelers is the most anticipated. There’s a Thursday Night Football matchup at home against the Broncos. That could be an electric atmosphere in Cleveland.

The Browns face the Ravens in prime time in Week 12, which could be a matchup of two teams fighting for control of the division by then. Or maybe that Week 16 game against the Packers combines your two favorite things: Christmas and Browns football.

Or maybe the previous 150 words I wrote are pointless and it is simply the Chiefs in Week 1.

Check out the poll below and let us know what you think.

Which Browns are on the bubble? And why do the Indians miss Roberto Perez? Monday’s Sports 4 CLE

How did the Browns draft picks look at rookie minicamp? Hey, Mary Kay!