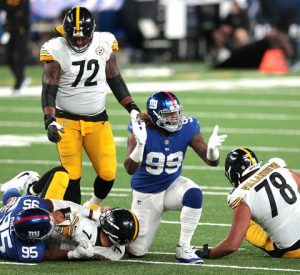 It took well over a year, but Leonard Williams’ contract saga with the New York Giants finally ended.

The 26-year-old Mainland High alumnus put pen to paper on a three-year deal worth a maximum value of $63 million, including $45 million in total guarantees, Art Stapleton of NorthJersey.com and the USA Today Network reported March 16.

The Giants acquired Williams in October 2019 from the Jets for a pair of draft picks, including a third-rounder last year. He rewarded the team’s investment with a career-high 11½ sacks last year while playing on a one-year, $16.1 million franchise tender deal.

“Honestly, I just love this organization,” Williams said Thursday in a Zoom meeting with reporters. “I love the way I’ve been getting coached here under Coach (Joe) Judge and his staff, I love the way they treat people here and I love the guys they’re bringing into the building, player-wise. Overall, it just seemed like a good fit.

“It felt like I was back in college, back in those high school times when you’re not thinking about what the media is saying, or money or anything like that. You’re just thinking about the reason why we play this game — the love for this game. I’m not saying that’s ever left me, but this year was a lot of fun, playing in this system, with my teammates, with this staff. When I’m out there having fun, I’m playing my best.”

Unable to hammer out the details on a long-term extension ahead of the March 9 deadline, the Giants applied the tag on Williams again to avoid him hitting the open market. Reaching a deal was a necessity for New York, though, in order to free up cap space in its reported pursuit of wide receiver Kenny Golladay.

With Williams’ deal finally done, let’s take a look at the largest contracts ever signed by Volusia and Flagler-area athletes, including a handful of NFL stars — past and present.

Note: This list does not factor off-field endorsements, such as Olympic gold medal swimmer and Spruce Creek grad Ryan Lochte’s past partnerships with Speedo, Ralph Lauren and others. Nor does it count individual tournament winnings, notably Mainland product Matt Every’s $2.54 million 2014 season on the PGA Tour highlighted by a victory at the Arnold Palmer Invitational in Orlando.

The DeLand native, a former infielder at Calvary Christian Academy and Stetson University, is one of the best pitchers in baseball today.

Twice awarded the National League Cy Young, and selected as a finalist again in 2020, deGrom has proved to be a bargain for the Mets — even with a nine-figure commitment.

The face of the Braves for a generation, Pierson native Jones collected more than $168 million in career earnings from the team that selected him No. 1 overall in 1990.

On Aug. 17, 2000, Jones signed a six-year deal worth $90 million — an average annual figure that matched the highest in Major League Baseball at the time. Of course, the Hall of Fame third baseman was worth every penny, producing at least 3.5 wins above replacement in all six of those seasons.

Jones kept producing well into the late stages of his career, making the All-Star Game three times after he turned 35. In 19 seasons, he batted .303 with a .930 OPS and 468 home runs — third-most among switch-hitters in the history of baseball.

At the turn of the millennium, few stars shined brighter in the NBA than Mainland legend Carter. The 1998-99 Rookie of the Year made the expansion Raptors a must-see attraction in their embryonic stages with his high-flying, high-impact dunks.

Toronto paid their superstar big bucks — $85 million — in a six-year, rookie-scale extension on Aug. 1, 2001. Three years later, the Raptors sent him packing to New Jersey in a trade for three players and two first-round draft picks.

In New Jersey, Carter earned another lucrative contract — four years, $61.6 million — and dealt him halfway through, as well. The Nets shipped Carter to the hometown Orlando Magic, fresh off an appearance in the NBA Finals, in the summer of 2009.

Whether he completes the three-year deal or not, Mainland’s former Under Armour All-American already secured the largest single amount of guaranteed money of any NFL player in history from the Volusia-Flagler area.

Part of the appeal of the deal from the point of view of Williams’ co-representation, VaynerSports’ Brandon Parker and ISE’s Roosevelt Barnes, is an additional chance to reach free agency before the 6-foot-5, 302-pound defensive end hits the age of 30.

At the time former Stetson starter Kluber signed his five-year, $38.5 million extension with the Tribe, it was thought to potentially be a “lifetime contract.” He’s since suited up for two other American League teams.

Kluber brought home a pair of AL Cy Young Awards, one before inking the extension and another after (in 2017). He posted four seasons of 18 wins or more, including 20 in 2018. A pair of injuries — a fractured forearm off a comeback line drive and an oblique strain — derailed the right-handed ace the following season, and Cleveland sent him to the Texas Rangers in a trade.

A valuable piece of the Eagles’ turnaround under Andy Reid, DeLand High grad Thomas protected Donovan McNabb’s blind side — and was paid handsomely for his services.

Thomas signed a six-year, $34 million contract extension, including an $8 million signing bonus, in 2000. It was a wise investment for Philly, considering the 6-foot-7, 349-pound tackle made the Pro Bowl in three of the four ensuing seasons.

He was a stalwart, too. In Thomas’ 11 seasons spent in Philadelphia, he missed a grand total of 10 games.

Collins, a Bethune-Cookman product, had a pick-six in Green Bay’s 31-25 win over the Pittsburgh Steelers. Soon after, he earned a $26.75 million, four-year deal — with $14 million guaranteed.

Unfortunately, Collins’ career was cut short two games into the 2011 campaign, suffering a neck injury while attempting to make a tackle in a game against the Carolina Panthers.

Most of Mathis’ gridiron glory took place in Jacksonville — attending Englewood High and spending 10 of his 13 NFL seasons with the hometown Jaguars, sandwiched between a four-year stint at Bethune-Cookman.

The Jaguars struck gold in the second round of the 2003 draft as Mathis blossomed into an immediate impact starter at cornerback, intercepting eight passes to earn All-Pro honors in 2006. Prior to that, he received a significant bump in salary, penning a five-year, $25.5 million deal with a $4.7 million signing bonus.

Mathis struggled to stay healthy between 2008-12, but had a mini-resurgence in Detroit, starting all 16 games in 2014 and returning his lone pick for a 41-yard touchdown.