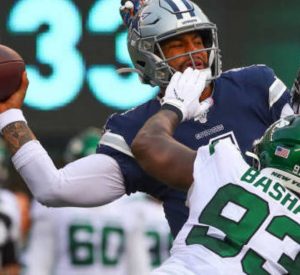 FRISCO – The Dallas Cowboys have hinted to us that they do not plan on being tier-one shoppers as NFL free agency hits this week. But that doesn’t mean they won’t be newsmakers. Updated by the minute, our Dallas Cowboys 2021 NFL Free Agency Tracker: Monday morning negotiations, Wednesday afternoon signings … News and views on the roster-building effort as they open with about $18 million in cap room, though much of that is already earmarked  …

MARCH 21: COWBOYS OFFICIALLY SIGN 5: The Cowboys officially signed five NFL free agents, including pass-rush talent Tarell Basham from the Jets. It’s worth noting that Basham is presently listed by Dallas as a “linebacker,” though we figure him as an edge rusher.

Similarly, Dallas signee Carlos Watkins, formerly of the Texans, is presently listed as a “defensive end,” though it’s likely he’ll play more inside.

When they officially sign ex Falcon Keanu Neal, the Cowboys PR department will face another positional challenge, as Neal is a safety by trade but will, sources tell CowboysSI.com, be a “hybrid” player who lines up at safety and at linebacker. Neal’s deal may also be announced as something more than the original “one-year contract,” as it could feature “dummy” voidable years tacked on.

MARCH 18: D-LINEMEN IN The Dallas Cowboys have made another Thursday addition to their defensive line via NFL free agency, as Brent Urban is coming to The Star via a one-year deal … as revealed both by him and (first) by his wife, broke the news on her Twitter account.

Urban joins former Houston Texans defensive lineman Carlos Watkins in coming to Dallas, and like Watkins was a part-time starter in his previous stop.

Urban – who happens to stand 6-7 and weighs 300 – started eight of the 16 games he played for the Chicago Bears last season and recorded 36 tackles and 2.5 sacks. He signed with Chicago during two seasons after stints with the Titans and the Ravens, where the 29-year-old Canadian was a fourth-round pick in the 2014 NFL Draft.

Earlier in the day, the Cowboys agreed to a deal with defensive tackle Carlos Watkins. Watkins, a 2017 fourth-round pick out of Clemson, played four seasons with the Texans before becoming an unrestricted free agent after finishing out his rookie contract with the Texans. The 6-3, 297-pound defensive lineman was a starter with Houston in 2020, registering 11 first-team appearances. He recorded two of his career four sacks last season while playing about half of the snaps for the Texans.

MARCH 17: ONE GET, ONE GOT AWAY Cowboys cornerback Jourdan Lewis is staying via a three-year deal, an arrangement that will surely be overshadowed by the fact that a Dallas idea won’t work out … as Patrick Peterson is signing a one-year deal with Minnesota.

Jones has tried to play through injuries in recent years and, as noted by Rob Phillips’ breaking report, leaves Dallas with a career 44.5-yard average.

Niswander averaged 47.2 yards in the final eight games, tying for ninth-best in the league.

Jones signed a four-year extension in 2017 worth nearly $9 million. He had one year left on his deal at a $2 million base salary.

MARCH 16: OT HOMECOMING Ty Nsekhe attended high school and college in Texas, and now he’s coming back – one more crack at it at age 35.

He is a resident of Dallas and active in the community, but most recently played for Buffalo, as the Bills signed him to a two-year, $10 million deal. He played some in 2019 but in 2020 was a non-factor.

Nsekhe, 6-8, 330, has bounced around pro football for more than a decade, including stints in the AFL, AFL2 and the CFL. In Dallas, the plan is for Tyron Smith and La’el Collins to start at tackle. There are kids behind them … and now there is Nsekhe.

MARCH 16: CJ IS A KEEPER Cowboys fans who pay attention know not to call him a “cornerback.” Because he’s not. But C.J. Goodwin is a special-teams ace – to the Cowboys, maybe one of the best in the NFL. So they’re keeping him, with a two-year deal that agent Drew Rosenhaus tells the media is worth $3.5 mil including a $2 mil signing bonus.

MARCH 16: WINNERS OR LOSERS? Day 1 of NFL Free Agency is in the books. Did Dallas win or lose?

It depends on whether you completely buy in to their philosophy.

It that smarter than the philosophy used on Day 1 in Houston, where, recognizing they have a poor roster, engineered 10 deals (in addition to their two weekend trades) – almost one-fourth of all the deals done Monday? Is it smarter than what Bill Belichick did in New England, supplementing the Cam Newton signing with a series of pricy moves featuring tight end Jonnu Smith and pass-rusher Matt Judon?

I’m not arguing against Dallas’ “smartness” here. But outside its mastery of the comp pick system – and acknowledging that the Dak Prescott signing “counts” – I can’t argue for Dallas ‘smartness,” either. Because that would mean the Cowboys front office is more savvy than the front offices in Minnesota (buying Davlin Tomlinson at $11 million APY), in Houston, in New England.

And frankly, the Dallas Cowboys cannot show evidence that they are “smarter” in free agency than any of their competitors.

So, the Cowboys “loser”? Any fan who expected Day 1 gifts under the March Christmas tree. And the “winner”? Dallas gets to be that as soon as it quits finishing seasons win six and seven and eight victories.

MARCH 15: JOE THOMAS TO TEXANS Joe Thomas made a little over $1 million in 2020 but he just doubled that in his one-year deal with the Houston Texans. He can start, back up and play special teams. … and in Dallas?

Leighton Vander Esch and Jaylon Smith need to be better. And depending on what Sean Lee decides about retirement, that leaves the Cowboys with a clear need for a third linebacker.

Instead, the new (as of last year) regime is turning the page, to Rams snapper Jake McQuaide, who of course played for special-teams coordinator John Fassel when both were in L.A.

MARCH 15: TENDER IS THE NIGHT Cowboys restricted free agents Cedrick Wilson and Antwaun Woods will each be tendered at $2,133,000 for 2021, Clarence Hill of the Fort Worth Star-Telegram reports. Receiver Noah Brown is also returning.

The Cowboys would love to have Dalton simply come back. But his first efforts, a free agency opens, is to be first-team.

Washington is clear in its desire to not “overpay” for a new QB. There are many directions the WFT could go here. But Dalton is solid and might be affordable.

MARCH 15: 2 FALCONS SAFETIES? We’ve previously linked the Cowboys to one Falcons safety. How about two?

MARCH 15: CAM IS GONE The Panthers have grabbed a Cowboys O-lineman. According to multiple reports, the Panthers are signing Cam Erving on a two-year deal worth $10 million. Erving spent last season in Dallas, working as a swing tackle, but he got hurt early … then so many of his linemates did … and in the end he started five games.

The Cowboys believe they have young depth candidates to help here, and of course are planning on the healthy return of starters Tyron Smith and La’el Collins.

Oh, and there’s a potential comp pick to be gained by this Erving departure as well.

The Cowboys’ pass defense was sometimes adequate last year (at least compared to their run defense) but free safety Xavier Woods is a free agent. … and in our judgment, he’s a run-of-the-mill guy.

Woods plays the same position that Boston does, so it would stand to reason if Dallas thinks that either Boston is an upgrade or that they can’t afford to bring back Woods, they could have interest in Boston.

Boston is 6-1 and 205 pounds and was originally a fourth-round pick of the Panthers in 2014 out of North Carolina.

It’s a bit concerning that he played closer to the line of scrimmage this past year as opposed to what he did under coach Ron Rivera in Carolina, but that could be attributed to scheme changes.

However, when you combine that with his release after just one year of a three-year deal – the questions are fair to ask: How much range does Boston have left? And if he’s best-off playing down, do the Cowboys – with Donovan Wilson in play – really need him?

Boston signed back with Carolina on a three-year, $18 million contract less than a year ago. He would have counted over $6 million on the cap in 2021.

Woods might be considered a better coverage player than Boston at this point but as PFF notes, Boston probably isn’t someone you should count on for deep single-high safety range.

So … Can the Cowboys get by with a player like Boston at a lower cost than what Woods might cost? We very much disagree with the projections, but … yeah, Woods moves forward with a projected four-year, $6.25 million cost (via OvertheCap.com and PFF.)

If that’s the market, we think Boston is going to come in less than that because of age and other factors, which might lead to Dallas squeezing and losing Woods. … but the Cowboys, in the end, making a move that might make them better.

MARCH 10: PAY XAVIER? A simple question: Is Cowboys Free Agency: Is Xavier Woods A $25M Safety? We think we have the Cowboys’ answer.

MARCH 8: THE BIGGEST FREE AGENT – DAK DONE Review is all here … Cowboys BREAKING: Dak Deal Done!: Is this what Cowboys owner Jerry Jones meant by an ‘Imminent’ deal back in 2019? And about that contract and a “winner”: Cowboys’ Dak Deal: ‘Dummy’ Years And Did Jerry Win?: Sometimes it’s isn’t just the money. It’s how you write the deal.

MARCH 8: AMARI AND ZEKE RUMORS First came the Dak Deal – And then came questions about the Cowboys Status Of Amari Cooper: Time to make sure Prescott’s favorite target fits. Oh, and what about Dak’s best buddy? Barring a some unimaginably marvelous offer, trading Ezekiel Elliott, a source tells CowboysSI.com, is simply not the plan — gossip be damned. And there’s quite a bit of gossip.