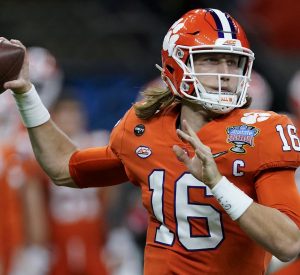 The first week of NFL free agency has reached its conclusion. Unsurprisingly, quarterback movement was a big part of the initial wave.

While the free-agent quarterback market wasn’t nearly as robust as it was a year ago, when Tom Brady and Philip Rivers headlined the class, teams were still quick to sign signal-callers. The Washington Football Team and Chicago Bears, for example, jumped on journeymen Ryan Fitzpatrick and Andy Dalton, respectively. The New Orleans Saints re-signed Jameis Winston, while the New England Patriots re-signed Cam Newton.

The relatively underwhelming free-agent QB class isn’t likely to preclude teams from targeting signal-callers early in the draft. With the first wave of free agency over, we have a better idea of what those ideal landing spots could look like.

Here, we’ll examine the top five quarterback prospects, according to Bleacher Report’s big board, and determine their best landing spots based on factors like expected draft range, supporting talent and coaching fit. These things can determine whether a prospect booms or busts at the next level.

It’s beginning to look like Trevor Lawrence and Zach Wilson will be the first two quarterbacks off the board next month, and we’ll get to those two shortly. If this holds true, there will be some jockeying to be the third taken.

Ohio State’s Justin Fields has a good shot. While he wasn’t particularly consistent this past season—he had just 194 passing yards in the College Football Playoff Championship Game—he checks all of the boxes physically.

“Like Dak Prescott before him, Fields enters the league with dual-threat capabilities but is more of a pocket passer with the ability to extend plays or win with his legs when needed. … He sees the field fairly well inside the Buckeyes’ quarterback-friendly offense but needs to become a full-field reader and prevent his eyes from becoming transfixed on primary targets.”

It seems like Fields could use a little more polish before taking the reins of an NFL offense. This is why the Atlanta Falcons could be an ideal landing spot. Atlanta owns the fourth pick and has an entrenched starter in Matt Ryan.

Fields wouldn’t be pressed into service immediately and would be in a situation similar to that of Jordan Love, who is sitting behind Aaron Rodgers with the Green Bay Packers.

Once Fields is ready to take over, he would have weapons like Calvin Ridley and Hayden Hurst in place, plus an offensive-minded head coach in Arthur Smith. Smith got the most out of Ryan Tannehill as the offensive coordinator of the Tennessee Titans and could likely do the same for Fields.

While many of this year’s quarterback prospects have high athletic profiles, Alabama’s Mac Jones is more of a traditional pocket passer who relies on his arm talent, field vision and accuracy.

That said, Jones took advantage of his tremendous supporting cast and helped make Alabama’s offense arguably the best in the country last season. His efficiency cannot be ignored. Yes, Jones got to throw to the likes of DeVonta Smith and Jaylen Waddle, but his 4,500 passing yards and 41 touchdowns to four interceptions didn’t come by accident.

LSU’s Joe Burrow was also surrounded by outstanding talent during his final collegiate season. He was the No. 1 overall pick and made a quick transition to the NFL game with the Cincinnati Bengals. Coincidentally, Burrow was aided by passing-game coordinator Joe Brady, who is now the offensive coordinator of the Carolina Panthers.

The Panthers are high on Jones and could be poised to take him if he’s still there at No. 8.

“His floor is No. 8. Carolina Panthers,” ESPN’s Mike Tannenbaum said on Get Up. “Go back to the Senior Bowl in Mobile, Alabama. [Panthers head coach] Matt Rhule loved him. It’s no secret they’re looking for a quarterback. So Mac Jones’ floor in this year’s draft is No. 8.”

Brady would be the perfect offensive mind to aid Jones, and the Panthers aren’t hurting for offensive talent. They already have running back Christian McCaffrey and wideout DJ Moore. They helped to solidify the line by franchise-tagging Taylor Moton and signing Pat Elflein and Cam Erving.

Jones would also get an experienced quarterback to learn from in Teddy Bridgewater.

North Dakota State’s Trey Lance is perhaps the most intriguing quarterback prospect in this year’s class. He only appeared in one game this past season and didn’t exactly play against elite competition for the Bison. Statistically speaking, however, he was remarkable in his lone campaign as a starter.

In 2019, Lance passed for 2,786 yards with 28 touchdowns and zero interceptions. He also rushed for 1,100 yards and 14 more scores. These numbers suggest that he can be a top-tier dual threat at the next level in the mold of Lamar Jackson and Kyler Murray.

While Lance is far from a finished product, he has intriguing upside—not too different from Buffalo Bills quarterback Josh Allen when he came out three years ago.

“He is dripping with ability … Nitpick him all you want, but this guy that can make some special, special throws,” NFL Media’s Daniel Jeremiah said of Lance (via NFL Network’s Mike Garafolo). Jeremiah also received a text from an NFL evaluator who indeed compared Lance to Allen.

Lance may not be one of the first quarterbacks off the board; however, he should find suitors in the middle of the draft. And the New England Patriots happen to be lurking there with the 15th pick.

New England could be the perfect spot for Lance after it loaded up in free agency. Players like tight ends Hunter Henry and Jonnu Smith, offensive tackle Trent Brown and wide receiver Nelson Agholor can help set up a young quarterback for success.

With the Patriots bringing back Cam Newton for a second season, they have shown that they’re willing to embrace a dual-threat quarterback. Newton, meanwhile, could help teach Lance the nuances of the modern NFL.

Whether he’s a good fit or not, Clemson quarterback Trevor Lawrence is almost assuredly landing with the Jacksonville Jaguars. The team owns the No. 1 pick in the draft and needs a franchise signal-caller. Lawrence is perceived as a generational talent.

“He will be the highest-rated and the most sought-after prospect at that position since Andrew Luck,” ESPN analyst Dan Orlovsky said on Get Up.

Fortunately for Lawrence, Jacksonville should be a fine landing spot. The Jaguars have an experienced college coach in Urban Meyer who can help mesh what Lawrence already knows with a pro-style offense.

He’ll be assisted by Darrell Bevell, who has previously served in the offensive coordinator role for the Minnesota Vikings, Seattle Seahawks and Detroit Lions and has worked with Hall of Fame-caliber quarterbacks Brett Favre, Russell Wilson and Matthew Stafford.

Jacksonville also has a solid offensive supporting cast. James Robinson was a fantastic running back as a rookie in 2020, racking up more than 1,400 yards from scrimmage and 10 touchdowns in 14 games. Wide receivers DJ Chark Jr. and Laviska Shenault Jr. are also still in the fold.

The Jaguars should be able to further add to Lawrence’s supporting cast with the 25th pick, a first-rounder earned by trading Jalen Ramsey to the Los Angeles Rams in 2019.

While Lawrence is widely expected to go No. 1 overall, he isn’t the top quarterback on everyone’s draft board. Some, including Pro Football Talk’s Chris Simms, believe that BYU quarterback Zach Wilson is the superior prospect.

“Zach Wilson is clearly the No. 1 quarterback in the draft for me,” Simms said on PFT Live. “There is a separation. Zach Wilson is a really, really special football player.”

If Wilson is indeed better than or on par with Lawrence, the Jets will likely be in play for him at No. 2 overall, whether or not Sam Darnold is still on the roster. And they could be a perfect landing spot for Wilson.

The Jets have some quality supporting talent in place too. They already had their left tackle of the future in Mekhi Becton and added a trio of pass-catchers in free agency: Corey Davis, Keelan Cole and tight end Tyler Kroft. Returning receivers Jamison Crowder and Denzel Mims are also in the fold.

Wilson could also benefit from New York’s multiple first-round picks. The Jets have the 23rd selection after dealing Jamal Adams to the Seattle Seahawks last summer.