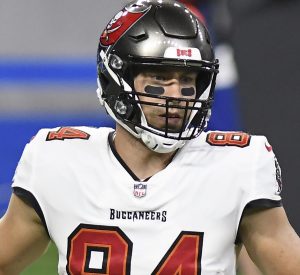 The start of the new league year has brought about plenty of transactions across the NFL as teams sign free agents and release veterans to improve their rosters and get salary-cap compliant for the 2021 season.

This time of year often sees organizations elect to part ways with declining veterans to open up roster space for incoming rookies. But with the lowered salary cap—2021 marks the first time in seven years the cap has failed to grow by more than $10 million—clubs have had to make even more tough financial decisions than usual.

While most free agents haven’t been cashing in on big paydays due to the league’s overall lack of financial flexibility, some notable talents remain on the open market. That list could grow over the next month as many organizations stare down tough decisions regarding veterans on the fringes of their rosters, as well as their plans for the upcoming rookie class.

With that in mind, here is a list of players who could end up released before the 2021 NFL draft.

The Cleveland Browns were expected to be a big player in the free-agency market this offseason, but they haven’t made too many flashy signings so far. Their biggest was former Los Angeles Rams safety John Johnson, but they should still have a few moves up their sleeve as they finish filling out the roster.

One could be to acquire even more financial flexibility by releasing Sheldon Richardson. The defensive tackle is set to count for $13.7 million against the cap during the final year of a three-year, $37 million contract. Parting ways would open $12 million in cap space with a dead-money hit of $1.7 million.

With Richardson turning 31 during the 2021 campaign, it wouldn’t be a shock to see the eight-year veteran’s production start to slip. He’s been a steady producer during his tenure in Cleveland but likely doesn’t have too much left in the tank after playing nearly 800 snaps last season.

While the Browns are not exactly brimming with talent along the interior of their defensive line—especially after letting Larry Ogunjobi walk—they would be better served with extra cap room they could utilize to sign players available now or who get added to the open market later in the offseason.

Jimmy Graham had a bit of a renaissance with the Chicago Bears in 2020, starting 15 games and racking up eight touchdowns during his first season with the club. Those were his most starts and scores since he was with the Seattle Seahawks between 2015-17.

While the 34-year-old has shown he can still contribute as a sure-handed tight end in the red zone, the Bears have quite a few holes to fill if they are going to return to the postseason.

Getting rid of Graham would free up $7 million. He is due $10 million against the cap and has a dead-money hit of $3 million going into the final season of his two-year, $16 million contract. That is too lofty a price for a team currently estimated to be $2.3 million over the cap that just franchise-tagged wideout Allen Robinson II and signed stopgap quarterback Andy Dalton for one year and $10 million.

Quite a few free agents still available on the open market could make a bigger impact in Chicago. Someone like T.Y. Hilton would greatly benefit the receiving corps and give Dalton a more consistent every-down target.

One way to free up more money would be to release tight end Cameron Brate, who is now a luxury piece alongside Gronk and O.J. Howard as the latter is set to return after going down with an Achilles injury early in 2020.

Brate is set to make $6.25 million as part of the six-year, $40.8 million deal he signed in 2018. None of the remaining years are guaranteed, however, and the Bucs could say goodbye this offseason, removing his salary from the books without taking on any dead money.

Tampa would be wise to use those savings on Antonio Brown, who helped form one of the greatest receiving corps the league has ever seen last year. Bringing him back to complement Godwin and Mike Evans on a team-friendly deal is a real possibility, but the Bucs may need to cut Brate to get it done.

The Baltimore Ravens haven’t been in a hurry to splurge in free agency. They have already watched pass-rushers Matt Judon and Yannick Ngakoue sign big-money deals elsewhere, instead doling out mid-range contracts to guard Kevin Zeitler and outside linebacker Tyus Bowser.

While the team isn’t exactly hurting for cap space, it could open up more room by cutting ties with Brandon Williams. The lane-clogging defensive tackle earned praise from Baltimore general manager Eric DeCosta, who recently claimed the organization expects to retain him for the final season of his five-year, $52.5 million deal.

While the Ravens might like to keep Williams, that could change depending on how the remainder of the offseason plays out. Some talented free agents are still left on the open market, and potential trades—especially leading up to the NFL draft—could drastically alter the front office’s plans.

This may seem like one of the more unlikely releases at this juncture, but things change fast in the NFL. It would hardly be a shock to see Williams land on the open market within the next month or so.

If Baltimore does find itself in need of some quick financial freedom, he would be an obvious choice to release. With his cap hit of $14.4 million and dead-cap number of $6.9 million, the Ravens could set their defensive tackle free and clear up $7.5 million.

The Kansas City Chiefs made one of the biggest signings in free agency when they came to terms with prized guard Joe Thuney on a five-year, $80 million contract. The move bolsters an offensive line that sorely needed more talent after it was exposed in a Super Bowl LV defeat, but it also tied up the finances in the process.

Offensive line wasn’t the Chiefs’ only need this offseason, but they have yet to make any other notable signings. They did take a one-year flier on pass-rusher Taco Charlton, retained tackle Mike Remmers and poached tight end Blake Bell from the Dallas Cowboys, but they could still use a few more pieces before the NFL draft.

If Kansas City finds itself in a financial bind, designating Anthony Hitchens as a post-June 1 release would save $6.4 million, although he would have a dead-cap hit of $4.2 million.

The linebacker has lost a step after seven seasons in the league and was often picked on by opposing signal-callers when he was forced into coverage last year. The Chiefs would be wise to move on from him now and acquire cap room they could use on younger players with upside or more productive veterans.

Even without another transaction, the Chiefs are still a title contender going into the new campaign, but team brass should not be against the idea of tinkering with the roster a bit more to put themselves in even better position to make a third straight run to the Super Bowl.

If they do make some cost-saving moves, expect Hitchens to be one of the first to get the axe.

Plenty of name-brand players have already been released, both in the lead-up to and around the start of the new league year. Some have already found new homes, while others are still on the open market.

J.J. Watt was arguably the biggest star to get cut during the 2021 NFL offseason after the Houston Texans elected to part ways with their longtime pass-rusher to facilitate a rebuilding effort. He landed comfortably with the Arizona Cardinals after beings courted by numerous suitors, and he will form a ferocious pass-rushing tandem with Chandler Jones in the desert.

Geno Atkins is another veteran pass-rusher likely to land in the Hall of Fame when his career ends, but it won’t be with the team that drafted him after the Cincinnati Bengals released him. He saw his production slip in 2020, but the interior defensive lineman still projects to be one of the top free-agent targets for teams still seeking talent at the position.

Players on the other side of the trenches haven’t been safe from cuts, either. The Kansas City Chiefs notably released a pair of veteran stalwarts along their offensive line, cutting both Mitchell Schwartz and 2013 No. 1 overall pick Eric Fisher.