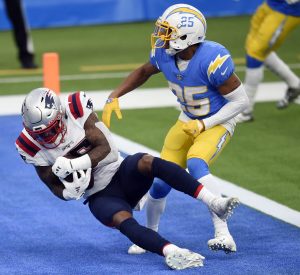 As we approach April, buzz about the upcoming NFL draft is beginning to reach a fever pitch.

Before we can get there, however, there’s still plenty of action to come down the pike this offseason, and not all of it will be free agency-related.

We’ve already seen a handful of trades this offseason, including the (now-official) Matthew Stafford-Jared Goff trade and the Indianapolis Colts’ trade for Carson Wentz, but we have reason to expect more are on the horizon.

Many NFL players have had their names linked to trade rumors this offseason, including several quarterbacks. We’ll take a look at some of the biggest ones who seem likely to be moved in the coming weeks.

Some of the following players have been named in actual reported rumors; others just make sense given either moves their teams have made already in free agency or moves they are expected to make in the NFL draft (Jacksonville Jaguars, we’re looking at you).

Sam Darnold’s name continues to pop up in trade rumors around the league, and with the New York Jets owning the No. 2 pick in the 2021 NFL draft, it’s not a given that he will be donning the White and Green come training camp.

Seattle has been one destination connected to Darnold. The trade chatter surrounding Seahawks quarterback Russell Wilson quieted once Seattle rejected the Bears’ mega offer, but head coach Pete Carroll “has a high opinion of Sam Darnold and could end up trading for the Jets quarterback if Seattle deals Russell Wilson,” per Pat Leonard of the New York Daily News.

The latest potential suitor for the 23-year-old was the Washington Football Team; despite signing Ryan Fitzpatrick to a one-year, $10 million deal, the team has not ruled out a trade for Darnold, according to Connor Hughes of The Athletic. Hughes noted this was a less likely destination, as Washington “won’t be willing to go as high as other teams in draft compensation.”

The Denver Broncos could be another logical destination for Darnold. Many insiders around the league believed he was John Elway’s top quarterback choice in the 2018 NFL draft, as ESPN’s Jeff Legwold reported at the time. Does Elway think Drew Lock is the future in Denver? If not, perhaps this is his moment to get his guy.

The Jets must decide by May 4 if they want to exercise the fifth-year option on Darnold’s rookie deal.

“There are people around the NFL who believe the Jets will eventually trade Sam Darnold, and others who are convinced the Jets will stick with the 23-year-old for at least another year,” SNY NFL Insider Ralph Vacchiano wrote last week. “But everyone seems to agree that Jets GM Joe Douglas hasn’t made a final decision yet.”

Deshaun Watson was a name on the NFL trade market early in the offseason, even before the recent sexual assault civil lawsuits filed against the quarterback by several massage therapists.

However, in spite of the pending legal action against the signal-caller—to which Watson will respond next week, according to his lawyer (h/t Fox 26’s Mark Berman)—multiple teams remain interested in a trade.

One might assume the Texans would be even more motivated to trade Watson, given the uncertainty surrounding the class-action suit, in which Tony Buzbee, the attorney representing the women, plans to bring evidence and affidavits.

Per Wilson, however, “The Texans remain steadfast in not wanting to trade Watson, according to sources, while general manager Nick Caserio concentrates on overhauling the roster of the 4-12 team he inherited.”

But Watson and the team that drafted him aren’t quite seeing eye-to-eye. Watson has a no-trade clause, giving him the ability to veto a potential trade. Per Wilson, Watson has told both the Texans as well as friends that he “has zero intentions of ‘ever playing another down’ for Houston.”

The actions of the Philadelphia Eagles this offseason have clearly suggested that they are considering moving tight end Zach Ertz and his $8.25 million base salary in 2021. As Ian Rapoport reported on March 16, the Eagles gave permission to seek a trade, and “several teams have been engaged.”

Unfortunately for the Eagles’ checkbook, however, they don’t seem to be getting many bites.

The Buffalo Bills were most recently being floated as having legitimate interest in Ertz. But as ESPN’s Marcel Louis-Jacques reported Friday, the same day the Bills signed tight end Jacob Hollister to a one-year deal, there was “nothing there” between Buffalo and Philadelphia.

According to Louis-Jacques’ sources, the Eagles were looking for as much as a third-rounder for Ertz.

Playing only 11 games in 2020, Ertz totaled just 335 yards on 36 receptions for one touchdown. He is entering the last year of a five-year, $42.5 million extension.

Ertz’s value was clearly higher last year, but the question is whether it would be better for the Eagles to get something rather than nothing if they’re going to enter a rebuild anyway.

There was a legend taking root around the NFL after the 2018 season. Maybe, just maybe, a franchise could trade for journeyman quarterback Nick Foles and he could, once again, ascend from backup status to lead the team to Super Bowl glory as he did with the Philadelphia Eagles.

That dream didn’t quite come to fruition for the Jacksonville Jaguars in 2019 or the Chicago Bears in 2020.

However, there are rumors that the Eagles are looking to give Foles one more shot to work his magic.

In February, Windy City Gridiron contributor Brandon Robinson tweeted that the Bears had the top offer out for Carson Wentz. He later expanded on that in an appearance on 670 The Score with Joe Ostrowski, saying that Foles could be involved in the package (h/t Brandon Lee Gowton of Bleeding Green Nation).

The Bears, of course, did not trade for Wentz. (Why would you when you could have…Andy Dalton?) But apparently, the prospect of Foles returning to the team that drafted him in 2012 is alive and well.

On Saturday, NFL insider Jeremy Fowler said on ESPN that the trade was still a possibility.

“Chicago is just looking to dump some salary right now,” Fowler said (h/t Bleeding Green Nation). “They’re in some cap problems, Nick Foles carries a $6.6 [million] cap hit that they could get off their books. I eventually think he’ll be traded, Philadelphia is an option for him.”

Bill Belichick has gone big in free agency this year; the New England Patriots’ haul included signing pass-rusher Matt Judon to a four-year deal worth up to $56 million and tight ends Jonnu Smith and Hunter Henry to deals worth up to $50 million and $37.5 million, respectively.

With all those salaries coming in, however, it would make sense for New England to seek some cap relief in the form of a trade. And multiple rumors have suggested that wideout N’Keal Harry, whom the Patriots drafted with the 32nd pick in the 2019 draft, is on the trading block.

Earlier in March, NFL Network’s Mike Garafolo reported on NFL Now that teams have contacted the Patriots about the possibility of a trade for Harry (h/t Around the NFL’s Kevin Patra).

On March 17, NFL Network’s Mike Giardi reported the Patriots “continue to engage with teams in trade talks” for Harry (h/t Around the NFL).

It’s possible another team may be able to glean better production from Harry, who has averaged only 19.7 receiving yards per game in New England.

The NFL quarterback carousel keeps turnin’ this offseason, and it doesn’t seem like it’s ready to stop just yet.

Jaguars quarterback Gardner Minshew II is another signal-caller to have his name tied to trade rumors this month.

On March 17, NFL Network’s Ian Rapoport reported that Jacksonville has “received a few calls from teams inquiring about” Minshew, noting that the Jags’ “QB room is in flux.”

However, Jaguars coach Urban Meyer noted in a call with media on March 19 that the team isn’t ready to deal Minshew just yet.

“Gardner has done some really good things here in Jacksonville. He’s a competitive maniac, which I really appreciate that about him, so there has been no decisions made,” Meyer said (h/t CBS Sports’ Tyler Sullivan).

Jacksonville, of course, owns the No. 1 overall pick in this spring’s NFL draft and would frankly be foolish not to use it on generational prospect Trevor Lawrence.

One could also read further into Meyer’s response if so inclined; when asked directly about discussing a trade, Meyer first said, “At this point, no.”

Reading between the lines (and reading the writing on the wall), it seems highly likely Minshew, who totaled 2,259 yards and 16 touchdowns to five interceptions in nine games last season, will be on the block this offseason.

If your team is in the market for a slot receiver, it just may be speaking to the Chicago Bears about Anthony Miller.

The Bears “are having trade discussions with other teams regarding WR Anthony Miller,” ESPN’s Adam Schefter reported last week. He added the wideout is “likely to be dealt.”

Miller, who is entering the final year of his rookie deal, is no doubt intriguing and worrying potential suitors all at once. The potential is there; Miller announced himself as a rookie in 2018 with seven touchdowns. However, he scored just four over the next two seasons, and Darnell Mooney eventually pushed him down the depth chart.

Miller also made headlines for all of the wrong reasons in the Bears’ playoff matchup against the New Orleans Saints. He was ejected after punching Saints safety C.J. Gardner-Johnson. Bears chairman George McCaskey later expressed his displeasure with Miller on WMVP-AM’s Waddle and Silvy (h/t Patrick Finley of the Chicago Sun-Times).

Whether he leaves town via trade or gets cut, don’t expect Miller to finish out his rookie contract in Chicago.

In high school, coaches lined him up at left guard and right tackle. That wasn’t acceptable to his father, Orlando Brown, who told the coaches to play his son at defense if he wasn’t at left tackle, per NFL Network’s Mike Garafolo.

It was a move Brown Jr. took to heart and one that now factors into what his offseason will look like.

“He always told me: ‘Don’t settle for playing right tackle. Make sure that when it comes time and you get to every level, you’re playing left,'” Brown Jr. told Garafolo.

So when the Baltimore Ravens signed left tackle Ronnie Stanley to a five-year, $98.8 million extension in October, the writing was on the wall.

“I’m a LEFT tackle,” Brown Jr. tweeted in January. Soon after, he asked the Ravens for permission to seek a trade, and they granted it, per NFL Network’s Ian Rapoport.

Garafolo reported the Ravens have had conversations with six teams and that “all parties involved seem confident a deal will get done to send Brown elsewhere for his fourth NFL season.” However, as Rapoport noted in February, “Baltimore would need a major haul” to get the deal done.