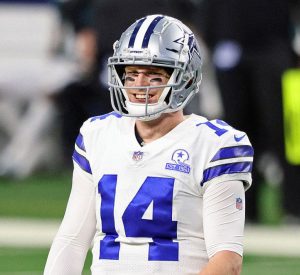 While he accepted a backup job in Dallas in 2020, Andy Dalton never wavered in his belief that he was still a starting-caliber NFL quarterback. And while his time in Dallas wasn’t a Cinderella story, Dalton played well enough in relief of Dak Prescott to earn another opportunity to start for an NFL team. On the eve of the league’s new year, the veteran quarterback came to terms on a one-year, $10 million deal with the Bears, who on Thursday watched their former starter — Mitchell Trubisky — sign a one-year deal to become Josh Allen’s backup in Buffalo. And while the Bears do have Super Bowl LII MVP Nick Foles on their roster, Chicago has already given the keys of the offense to the Red Rifle.

“They told me I was the starter,” Dalton said last Thursday. “That was one of the reasons why I wanted to come here.”

Nearly a week after Dalton pulled the curtain back on his negotiations with Chicago and their plan going forward, the team’s official social media account wasn’t shy to say that the veteran is going to lead them into 2021. Of course, this isn’t exactly coming straight from coach Matt Nagy’s mouth, but all signs seem to be pointing to Dalton being the Bears’ leading man under center.

While Trubisky won six of his nine regular-season starts last season, the Bears deemed him expendable. In Dalton, the Bears are getting a three-time Pro Bowler who helped the Bengals reach the playoffs five consecutive years from 2011-15. The Bengals’ second all-time passing leader, Dalton was released after the Bengals went just 2-11 with him under center in 2019. Cincinnati replaced Dalton with Joe Burrow, who showed significant promise until a knee injury prematurely ended his rookie season.

Dalton’s time as Prescott’s backup lasted just five games; he replaced the Cowboys‘ franchise quarterback after Prescott suffered a season-ending injury against the Giants in Week 5. And while he was able to help the Cowboys defeat the Giants, Dalton missed two games after suffering a concussion and testing positive for COVID-19.

When Dalton returned in Week 11 following a bye week, Dallas was 2-7 and in the midst of a four-game losing streak. Despite their murky position, Dalton helped the Cowboys win four of their next six games to climb back into playoff contention entering the Cowboys’ season-finale against the Giants. Dallas fell short in New York however, and missed the playoffs for a second consecutive year. Dalton finished the season with 2,170 yards with 14 touchdowns and eight interceptions. His 64.9% completion percentage was Dalton’s highest since 2015.

In Chicago, Dalton will be flanked on offense by receiver Allen Robinson, running back David Montgomery, tight end Jimmy Graham, and an offensive line that received a solid 2020 season from center Cody Whitehair. Dalton is also supported by a talented Bears defense that is led by linebackers Roquan Smith, Danny Trevathan, Khalil Mack, and safety Eddie Jackson.

Look for the Bears to invest in their offensive line over the next two months. In fact, three of our four CBS Sports NFL draft experts currently have the Bears taking an offensive lineman with the 20th overall pick.