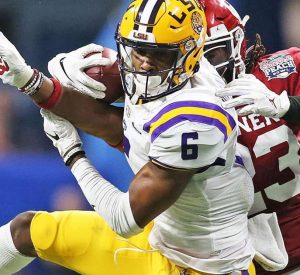 Terrace Marshall Jr. may not be currently receiving the same buzz as recent and future top LSU draft picks and fellow wide receivers Justin Jefferson and Ja’Marr Chase, but how much of that is driven by his 2020 midseason opt-out after playing in a borderline disastrous 2020 pass game? Too much. Marshall has all of the traits that translate to Fantasy football success at the NFL level, but he is more than just a traits-driven prospect. In fact, Marshall was 247Sports’ No. 1 WR prospect in his high school class and the 287th-highest ranked recruit at any position in their database’s history.

Marshall also has the production to back it up. More importantly, Marshall dominated in the toughest conference in college football at a very early age. Dominating at an early age has been an indicator of future success at the next level, and as Marshall enters the NFL, he’ll bring with him a combination of size, speed, ball skills and past production that make him an excellent bet for immediate and sustainable production.

We’re breaking down everything you need to know about Marshall from a Fantasy manager perspective, including best fits, Dynasty outlook, measurables, scouting report, key stats and an NFL comparison.

Although some expected the Packers to be aggressive on the free agent WR market, they passed despite rumors they were interested in trading for former impending free agent Will Fuller during last year’s trade deadline. This leaves them with an excellent opportunity to use major draft capital at the position. Landing in Green Bay would be the No. 1 destination for Marshall for a multitude of reasons. For starters, he would get to play with Aaron Rodgers. Also, Marshall would benefit from extra defensive attention focused on Davante Adams. From a schematic standpoint, Marshall’s production in the slot at LSU would allow him to play both outside and in for the Packers, leading to more targets. He’s also an excellent downfield receiver — a near-perfect match for Rodgers.

The Saints have tried a few different options as their No. 2 WR and No. 3 option in the pass game (behind Michael Thomas and Alvin Kamara), but nothing has stuck. Marshall can transition well into the No. 2 role in one of the NFL’s traditionally high-powered offenses thanks in large part to Sean Payton’s play calling and a consistently elite offensive line. I don’t expect the pass game to take a step back without Drew Brees, and if anything it might go in the other direction.

The Bengals may seem like an odd fit with Tee Higgins and Tyler Boyd on the roster, but with Joe Burrow in the lineup, the pass game proved more than capable of sustaining three receiving options. Also, while the defense is likely to take a step forward, it’s still a work in progress and that should lead to pass-heavy game scripts. The Bengals were in the mix for Kenny Golladay and are looking to add another weapon — Marshall makes for an excellent fit.

The Dynasty community views Marshall as more of a WR2-type prospect and he’s likely to be coming off the board in the middle of the second round of your standard rookie drafts. Having said that, it’s unlikely you’ll find a skill player with Marshall’s upside in that 15-20 pick range, and that makes him someone you’ll want to target.

There is no one-to-one comparison for Marshall at the NFL level, but when I watch him, I see a poor man’s Julio Jones. Marshall doesn’t quite have the upper body strength or frame that Jones has, but he still has the ability to add size/strength. If he does, he still won’t reach Jones’ level, but just because he won’t project similarly to a future Hall of Famer doesn’t mean he can’t be a No. 1 WR at the NFL level.