Home » NFL Rookies » Sammy Watkins has a good visit with Ravens, per report; former Chiefs’ WR to visit with Colts on Wednesday 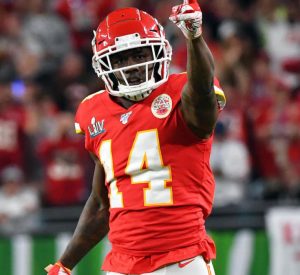 The start of NFL free agency in 2021 was hot and heavy for most positions, the key word here being “most.” It was anything but for wide receivers, who were forced to wait for their market to heat up, and it’s now beginning to. Curtis Samuel has joined the Washington Football Team, Kenny Golladay landed a massive four-year deal with the New York Giants and JuJu Smith-Schuster stunned the NFL in deciding to wave off a higher payday to stick with the Pittsburgh Steelers, and it’s the latter that put the Ravens in a tough spot.

They were hoping to land Smith-Schuster and whiffed on that attempt, now shifting their focus to Sammy Watkins. After having a good meeting with him on Tuesday, the Ravens are interested in signing Watkins, according to ESPN’s Adam Schefter. Watkins will now head to Indianapolis to meet with the Colts, who are also looking to add a veteran to their receiving corps.

Watkins began his NFL career as the fourth-overall pick for the Buffalo Bills in 2014, and quickly used his speed to make a name for himself. He reeled in 2,029 receiving yards and 15 touchdowns in his first two seasons, but was then slowed tremendously by injury in Year 3 — missing eight regular season games with a fracture in his foot that required surgery to repair — going on to ultimately part ways with Buffalo when they traded him to the Los Angeles Rams in 2017. It was a short stay in California, however, Watkins spending only eight games in L.A. before signing a three-year, $48 million contract that defeated the in-pursuit Dallas Cowboys at the time.

He never regained prime form in Kansas City, routinely missing time — roughly an entire season’s worth of regular season games (14) — due to injury, instead becoming a rotational piece more than a dynamic, consistent playmaker. With Tyreek Hill on the roster, Watkins was hoped to be the complementary piece, but that role has since been awarded to Mecole Hardman. His stint with the Chiefs was also blackened by a team suspension levied in 2019, but the two sides opted to remain together following the Super Bowl-winning season in 2020, but he’s now a free agent looking for a new NFL home.

Watkins delivered 1,613 receiving yards and eight touchdowns for the Chiefs over the last three seasons combined. In Baltimore, Watkins would help complement Marquise Brown and tight end Mark Andrews. The Ravens are also hoping for more productive this season from Devin Duvernay, who caught 20 of 26 targets during his rookie season.

In Indianapolis, Watkins would help replace T.Y. Hilton, a four-time Pro Bowler who is currently on the open market. Watkins would provide a veteran presence for a young Colts receiving corps that includes Michael Pittman Jr. and Zach Pascal. The Colts are surely trying to get more weapons for Carson Wentz, who was acquired via a trade with the Eagles earlier this offseason.