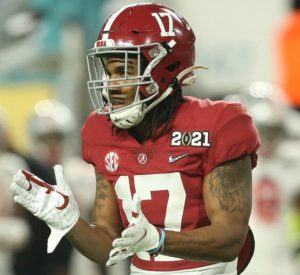 The NFL’s free agency period is in full swing, which means the 2021 NFL Draft is right around the corner. And with the draft steadily approaching, it’s almost time for rookie drafts to commence in dynasty fantasy football leagues.

In case anyone needs help on how to attack rookie drafts, I used our convenient Draft Wizard tool to conduct a 12-team, half-PPR mock draft. I randomized the draft order and received the No. 8 overall selection.

1.08: Jaylen Waddle (WR – Alabama)
Just by taking a quick peek at the 2021 NFL Draft, it’s evident that this year’s class of wide receivers is a deep group. Given that I was drafting in a one-quarterback league with half-PPR scoring, my goal was to come away with a premier running back or wide receiver prospect in the first round.

With Najee Harris, Travis Etienne, Ja’Marr Chase, Devonta Smith, and Kyle Pitts all off the board, I went with Jaylen Waddle at pick No. 8.

Waddle is a perfect wide receiver for today’s NFL due to his field-stretching speed and ability to create separation with ease. While many people believe Smith is the better of Alabama’s incoming rookie wideouts, Waddle was on track for a special 2020 campaign before suffering an ankle injury in Week 5 versus Tennessee.

Before getting injured, Waddle had 28 receptions for a team-high 591 receiving yards and four receiving touchdowns. His 21.1 yards per reception were good enough for the eighth-best mark in the nation.

Most explosive player in the draft. pic.twitter.com/jo5TZol0gM

Whether on offense or special teams, Waddle is an explosive player with the ball in his hands. Anytime he got an opportunity at Alabama, there was always a chance for him to score.

I wouldn’t advise anyone to pass on Waddle near the end of the first round of any rookie drafts this offseason. Regardless of where he lands in the NFL Draft, he should be an immediate fantasy contributor.

2.05: Michael Carter (RB – North Carolina)
When watching tape from the 2020 college football season, no running back duo was more dominant than North Carolina’s Javonte Williams and Michael Carter. While Williams is considered more of an early-down back – and an underrated receiver – who can punish opposing defenders, Carter is an ideal change-of-pace back who can excel as a pass-catching threat.

With that said, Carter finished his senior season with a team-leading 1,245 rushing yards and nine rushing touchdowns to go along with 25 receptions, 267 receiving yards, and two receiving scores.

In today’s NFL, running backs must handle pass-catching duties if they want to be an every-down back. NFL teams will love the shiftiness Carter exudes when running routes or when he has the ball in his hands. Having a linebacker cover Carter in open space is a death sentence for the opposing team.

Michael Carter buckling the LB on his Texas route pic.twitter.com/q4ewE8hnEv

During my simulated rookie draft, Williams was already selected, leaving me a choice of adding another wide receiver or taking Carter in the second round. I chose Carter due to his translatable abilities as a receiver and the likeliness of him carving out a decent-sized role in his rookie season.

3.08: Amari Rodgers (WR – Clemson)
In recent seasons, we’ve seen wide receiver prospects come in the NFL with the skill set to play running back. Clemson’s Amari Rodgers fits the same mold as Deebo Samuel and Laviska Shenault Jr., taking part in running back drills at his Pro Day to show teams he’s willing to be utilized in a variety of ways.

Rodgers never shied away from getting physical with opposing defenders. To cap off his collegiate career at Clemson, he mustered 77 receptions for 1,020 receiving yards and seven receiving touchdowns. Those numbers likely would have been larger had Trevor Lawrence not dealt with COVID-19 during the 2020 season.

While Rodgers is well-known as a YAC monster, he can succeed in multiple ways. Any team that selects Rodgers in next month’s NFL Draft should want to use him any way it possibly can. I couldn’t afford to pass on the overall value Rodgers brings to an offense in the third round.

4.05: Nico Collins (WR – Michigan)
NFL teams are looking for wide receivers that fit a certain style of play to carry out different roles in the offense. If any team is looking for a vertical threat who could be a draft steal, look no further than Nico Collins out of Michigan. Collins opted out of the 2020 season due to concerns with COVID-19, but he should still be viewed as a talented prospect.

It’s unfair to critique Collins for his lack of college production since Michigan has had trouble finding a competent quarterback under Jim Harbaugh. But when Collins is targeted down the field, there’s a good chance he’s coming down with the ball. The former Wolverine showed off his jump-ball skills during one-on-ones at the Senior Bowl.

Michigan WR Nico Collins will be a boundary vertical threat in the NFL. So much size/athleticism and knows how to use it. No wasted time against press, feels the CB in good position down the field so gets his body in-between the catchpoint. High points, strong tuck #SeniorBowl pic.twitter.com/AkSvYADkEU

At 6-foot-4, 220 pounds, Collins moves smoothly for a wide receiver his size, which should pique certain teams’ interest. Even before we know who Collins will pass catches from, he’ll be an instant red-zone option with the potential to become an elite vertical threat at the next level. Getting the haul of Waddle, Rodgers, and Collins at wide receiver was a massive win.

5.08: Elijah Mitchell (RB – Louisiana)
In the fifth round, it’s about finding players who can bring value to your fantasy team, even if it isn’t in their rookie season. The running back position becomes extremely thin after the first few rounds, but Louisiana’s Elijah Mitchell could make a name for himself in the near future.

Mitchell notched over 1,000 yards from scrimmage in each of his final three seasons at Louisiana, proving his ability to be an every-down back at the next level. Despite his impressive production, Mitchell is expected to be a late-round pick in the 2021 NFL Draft. Nevertheless, his ever-improving ability as a receiver could earn him a role early in his professional career.

Many mock drafts don’t have single RB going in first round so some talented backs might fall to Day 3. One of next month’s best value picks will be @RaginCajunsFB three-down RB Elijah Mitchell. Few bigger backs catch the ball as naturally as @EliMitch15. #TheDraftStartsInMobile pic.twitter.com/sp1pWwJ5ag

Since I already selected three wide receivers, I searched for a running back to conclude the draft. While his immediate NFL role is uncertain (and is dependent on where he lands), Mitchell has an opportunity to at least give me depth at running back.

Beyond our fantasy football content, be sure to check out our award-winning slate of Fantasy Football Tools as you prepare for your draft this season. From our free mock Draft Simulator – which allows you to mock draft against realistic opponents – to our Draft Assistant – that optimizes your picks with expert advice – we’ve got you covered this fantasy football draft season.

Skyler Carlin is a featured writer at FantasyPros. For more from Skyler, check out his archive and follow him @skyler_carlin.