Home » NFL Rookies » 2021 NFL Draft: Here’s what can be inferred from the 49ers, Dolphins and Eagles trades 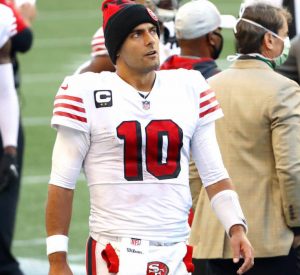 There was a lot to unpack following the deals and a lot can be inferred. Here is an attempt to make sense of it all:

Does the trade suggest the Jets are taking a QB at No. 2 overall?

San Francisco completed a deal to move up to No. 3 overall because Jacksonville is known to be taking a quarterback at No. 1 overall, presumably Clemson’s Trevor Lawrence. What about the Jets at No. 2 overall? Wouldn’t it make sense for the 49ers to reach out to old pal Robert Saleh — the former 49ers defensive coordinator and now Jets head coach — to gauge the team’s interest in accepting the same deal offered to Miami? Yes, it would.

ESPN’s Adam Schefter reported that San Francisco had been attempting to trade up for weeks and had discussions with the Dolphins, Falcons and Bengals, all of whom own a top-five pick. Schefter claims they did not have conversations with the Jets. Why? They either already knew the Jets were taking a quarterback at No. 2 overall or they actually did call the Jets but the 49ers don’t want to reveal that they found out what New York is doing with the pick. There is no reason that makes sense for why San Francisco would not even call the Jets.

By moving to No. 3 overall, 49ers general manager John Lynch is saying that the team feels comfortable with any one of the top three quarterbacks on their respective big board. It is a situation reminiscent of 2018, when the Jets traded up to No. 3 overall with the Colts, knowing they may only get the third-best option. As it turned out, the Browns took Baker Mayfield, the Giants took Saquon Barkley and the Jets took Darnold. The assumption of most is that BYU’s Zach Wilson is the Jets’ pick at No. 2 overall, but the timing of Friday’s announcement was interesting. Shortly after the initial trade between the 49ers and Dolphins was announced, a second trade between the Eagles and Dolphins came to light. The second deal clearly been in the works for some time, so the decision to leak out the trade news during Wilson’s pro day was noteworthy. Lynch was on the ground in Provo, Utah accepting congratulations with a smile. Nonetheless, the team is comfortable with at least three of the five quarterbacks projected in the first round: Ohio State’s Justin Fields, North Dakota State’s Trey Lance, Alabama’s Mac Jones, Wilson and Lawrence. Wilson should still be considered the heavy favorite to be the second quarterback taken.

Fans are now essentially assured of quarterbacks being taken 1-2-3 in the 2021 NFL Draft. In the history of the NFL Draft, that has only happened twice: 1971 (Jim Plunkett, Archie Manning and Dan Pastorini) and 1999 (Tim Couch, Donovan McNabb and Akili Smith). There have never been quarterbacks taken with each of the first four picks.

Could more trades happen before the draft?

The urgency to complete a deal more than a month before the draft and overpay, as many agree the 49ers did, suggests that other teams were also pursuing a trade up. It could be Carolina, Denver, New England or another team. Maybe San Francisco is convinced that the Falcons intend to take a quarterback at No. 4 overall and knew it needed to get ahead of them. The Falcons could have been trying to move up to No. 3 overall, as well, for all that is known. At the end of the day, it seems safe to say that there was interest from other teams to move up and San Francisco felt the pressure to lock something down now. Again looking back to the 2018 NFL Draft, there was a lot of interest in moving up: The Bills were rumored to be heavily interested and that led to the division rival Jets to become aggressive.

Shortly after the trade was revealed, thoughts turned to the availability of Garoppolo. Reports soon emerged that he was unavailable and the 49ers intended to roster him at $26.4 million this season. It could be the truth, but it is more likely lip service. San Francisco could use the salary cap space after doling out some big contracts over the past 12 months.

Let’s say it is the truth. Garoppolo has a no-trade clause in his contract for the 2021 season alone, so it may not even be an option. However, the competitor inside would likely be open to being traded elsewhere if it meant an opportunity to start. His future in San Francisco is no longer promised. The 49ers also couldn’t turn on the “open for business” sign because it takes away their leverage. By saying the plan is to keep him, it tells teams that they are perfectly fine keeping him this year unless another team meets their trade demands.

Most believe that a reunion with New England could be in play. Bill Belichick’s offseason moves indicate that he expects his team to bounce back and compete this season. A quarterback is the missing piece. If competing this year is the goal, then bringing in a player with knowledge of the system, like Garoppolo, makes more sense than a bright-eyed, bushy-tailed rookie.

Atlanta’s now the most fascinating team in the draft

The top three picks are likely now cast in stone. The Bengals and Dolphins are unlikely to trade out of No. 5 overall and No. 6 overall, respectively. That leaves Atlanta at No. 4 overall. The Falcons have long been considered a team capable of taking a quarterback, but if they are committed to Matt Ryan, they are suddenly the owners of the most coveted piece of real estate on the draft market. Teams know that they minimally have to get above Carolina at No. 8 overall and may need to go as high as Atlanta at No. 4 overall to have any level of assuredness.

Atlanta could stay put and take a quarterback or a different position. They could also trade out of the pick, which makes them the most interesting team in the 2021 NFL Draft.

Miami has its eyes on an elite player and know he can be had at No. 6

By moving down to No. 12 overall and then trading back up to No. 6 overall, Miami is suggesting that they know how the first five picks in the draft are going to play out or that they have a short list of players they consider to be blue chips. If you subscribe to the earlier thought that quarterbacks could be taken with the first three picks, then the only mystery is Atlanta at No. 4 overall and Cincinnati at No. 5 overall. The Bengals are likely to take a lineman, so the order becomes even more clear. Most have linked pass catchers like LSU’s Ja’Marr Chase, Florida’s Kyle Pitts or Alabama’s Jaylen Waddle to the Dolphins.

It was also very savvy of the Dolphins, who now lay claim to two first-round picks every year from 2020-2023, to invest in future draft capital. It has been a quirky year and with information being more hard to come by, the Dolphins were able to get extra bites at the apple in future years when teams should be able to return to regularly scheduled pre-draft medical checkups and in-person character evaluations.

For more on today’s trade, here is a fresh mock draft reflecting the new draft order.