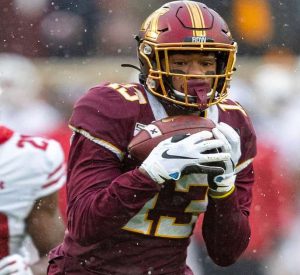 Free agency is all but complete, and there are still myriad roster holes to be filled across the NFL. For example, the Ravens desperately need a receiver. Lamar Jackson has to be begging for more weapons.

Below you will find the most glaring needs in the NFL with free agency in the rearview mirror and three potential options for each team to address those needs in the draft. The first two are early-round (mostly Round 1) candidates. The third is a Day 2 possibility.

From Kenny Golladay to Juju Smith-Schuster to T.Y. Hilton, the Ravens swung and missed on receivers in free agency. And Willie Snead is unlikely to re-sign. But all hope isn’t lost for the Lamar Jackson-led passing offense, an attack that produced the fewest aerial yards in football in 2020 (174.1 yards per game). Sure, the Ravens adore running, and are pretty darn good at pounding the rock.

But to become a more complete team, they have to get better through the air.

When considering size and traits needed to succeed at the NFL level, Bateman is the most complete wideout in the class. Marshall looks like a chiseled chain-mover, but he can take the top of the defense and is a stallion in the open field. Fehoko is the (rightfully) trendy mid-round wideout with size, suddenness, and rebounding skill teams looking for size and athleticism at the receiver position will be targeting, likely on Day 2.

Craving even more NFL coverage focusing on previews, recaps, news and analysis? Listen below and follow the Pick Six podcast for a daily dose of everything you need to follow pro football.

In one of the most red-flag moments in NFL free agency history (dead series), about 30 minutes after the Bears released Kyle Fuller last week, he signed with the Broncos. And, yes, they drafted Jaylon Johnson in Round 2 last year and signed veteran Desmond Trufant.

Given Johnson’s inexperience and Trufant’s age, Chicago still has to address the cornerback position in the draft.

I will not be shocked if Surtain or Horn are available when the Bears go on the clock at No. 20 overall. While I personally think going at No. 20 overall is too early for either cornerback prospect, it’s not as if Chicago could wait until Round 2 to select either of them. And they absolutely have first-round athletic profiles — plus NFL bloodlines — and they come from the SEC.

Joseph transferred from LSU and had four picks in his lone season at Kentucky, one of which came against Kentucky. Like Surtain and Horn, he’s long, smooth athletically and plays the ball well in the air. He’d be one heck of a pick for the Bears in the second or third round.

The Broncos lost Elijah Wilkinson in free agency, and veteran DeMar Dotson remains unsigned. He’s not the answer at the right tackle position anyway at his point in his pro career. The rest of the line is decently sturdy. The right tackle spot essentially has no starter penciled in right now.

Regardless of who’s the quarterback in 2021 for the Broncos, that position has to be addressed early in the draft.

Darrisaw is big, balanced, and powerful and would acclimate in an instant on the right side in Denver. Jenkins isn’t quite athletic as his tackle counterparts in this class. He’s probably the most technically sound and plays with a glorious mean streak.

And some team is going to get an NFL-ready, versatile blocker with good quicks and balance in Newman on the third day of the draft. The Broncos need to have him on their radar. He locked down the right tackle spot at Ole Miss.

With Justin Houston’s two-year stint in Indianapolis over, the Colts currently have former second-round picks Kemoko Turay and Ben Banogu — a pair of raw but athletic rushers who’ve yet to reach their potential — as the edge defenders with the most upside. Tyquan Lewis is there too.

Either way, Indianapolis needs more juice around the corner on its defensive line after only addressing the position with Isaac Rochell in free agency.

Paye might be available when the Colts pick in the 20s, and he would check the boxes Chris Ballard typically likes in his defenders. He’s big and athletic. The same goes for Phillips, although the true appeal with his game is its completeness, not a standout trait.

On the second day of the draft, or early on the third, Roche from Miami would buck the trend of the Colts picking raw but super-explosive edge rushers. And maybe that wouldn’t be the worst idea? He’s limited athletically and doesn’t have long arms. His pass-rush move arsenal is loaded.

Even with the splashy free-agent signing of Joe Thuney and agreeing to terms with Kyle Long out of retirement, the Chiefs have an offensive tackle problem.

Leatherwood crushed his combine workout and has clean film for two full seasons at left tackle in the SEC. The scouting report could really end right there. Radunz needs to get considerably stronger but possesses franchise tackle length and high-caliber athletic gifts, plus he was voted the overall best practice player by his teammates at the Senior Bowl.

Forsythe is the ultimate project at the tackle spot in this class. He’s listed at 6-foot-9 and 310 pounds and looks like an oversized tight end at left tackle. Of course, he’s effortlessly strong but needs to dial back his overaggressiveness and play with more balance. If he can do either of those things, we’re talking about a stud left tackle with unfathomable tools.

The Chargers don’t have a viable left tackle under contract right now, particularly after 2020 starter Sam Tevi signed the Colts. Technically, 2019 third-round pick Trey Pipkins would probably start at the vital position if the season started tomorrow. The Chargers don’t want that.

Justin Herbert managed to have an Offensive Rookie of the Year season with the rather inconsistent Tevi at left tackle, but not securing a quality blocker at that position during the early stages of Herbert’s career would be playing with fire.

Slater has a chance to be picked before Penei Sewell, believe it or not, because he represents a fine blend of fundamentals, athleticism, and low-center-of-gravity pop on impact. Darrisaw would be perfectly sensible in Round 1 too.

The Chargers probably won’t want to wait much longer than Round 2 to address the left tackle spot, and Cosmi is someone they should zero in on if they go in a different direction positionally in the first round. He added much-needed strength to his game in 2020 at Texas.

Glaring need: Right side of the offensive line

It was a strange mass exodus up front for the Raiders, with Rodney Hudson, Gabe Jackson, and Trent Brown all traded or released in a matter of weeks. Las Vegas is in dire straits to the right of the center and must make blocking reinforcement a priority early in the draft.

Vera-Tucker is a guard or tackle at the next level — doesn’t matter who’s in front of him, he’s getting blocked. Davis is stocky but athletic with a hard-to-shake equilibrium. While he wasn’t as dominant in 2020 as 2019, there weren’t many clear-cut whiffs on film, and he’s a people-mover in the run game.

On Day 2, Green looks like the surest thing at the guard position. He could add more weight to his frame but already shows power close to NFL-caliber by way of torque to control defenders at the point of attack. He’s quick out of his stance and plays with good patience.

The Cowboys have now lost Byron Jones and Chidobe Awuzie at the cornerback spot over the past two offseasons. We know how much of an abomination that group was in 2020, and while Trevon Diggs flashed, he was also roasted downfield early.

Without that position being addressed in free agency, the hole needs to be filled in the draft.

Sure, Patrick Surtain II would be an option in Round 1. But let’s highlight another corner. Farley is a converted receiver who shows receiver-type athletic traits and ball skills at all levels of the field. Melifonwu is yet another long, hyper-explosive cornerback who can stay with quicker wideouts on intricate routes.

Bynum, likely available late on Day 2 or early Day 3, has length deficiencies but is a twitched up, press-man specialist who’d bring more natural talent to the secondary, and he can cover separation specialists.

This couldn’t get anymore straight forward — Maurkice Pouncey retired. Like most teams, the Steelers didn’t have a center-in-waiting on the roster. Given Ben Roethlisberger’s lack of mobility and Pittsburgh’s needing to significantly improve their ground game from the stagnant unit it was in 2020, the center spot getting fixed in the draft is vital.

Humphrey is the most NFL-ready center in the class, he brings the requisite combination of athleticism, power, and balance to start and excel early in his career. Dickerson played every offensive line spot in his long college career, and had it not been for an ACL tear in December, he would’ve been stiff competition for Humphrey for the No. 1 center spot.

Myers is a dynamic mover too, and should be available on the second day of the draft because he has some length and strength deficiencies right now.