Home » NFL Rookies » Will the Saints Add to Their NFL Family Tree in the Draft? 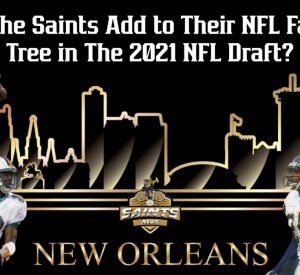 New Orleans Saints coach Sean Payton has always shown an affinity for players with NFL bloodlines since arriving to the franchise in 2006. Defensive end Cameron Jordan (Steve Jordan, Minnesota Vikings) and LB Kaden Elliss (Luther Elliss, Detroit Lions) both have fathers who starred in the NFL for years, while WR Michael Thomas is the nephew of former Pro Bowl wideout Keyshawn Johnson.

Past Sean Payton acquisitions who also had fathers who played in the NFL included RB Mark Ingram, WR Nick Toon, S Vinnie Sunseri, and S Jairus Byrd. The Saints have had more luck than not with adding players with NFL lineage. They could turn to this year’s draft with that same strategy when looking to add to their talented core of players.

Here are five notable players in this draft that are sons of former NFL superstars.

Surtain will be the first cornerback off the board after being one of the country’s best defensive players for the national champion Crimson Tide. He’s a big corner who plays physically and has the athleticism to stay with any receiver.

A starter as a true freshman, Surtain capped off a standout college career by winning co-MVP award in the national title game. The Saints would have to trade up, perhaps into the top ten picks, to get him. They would get an instant starter alongside Pro Bowl CB Marshon Lattimore.

Surtain’s father, Patrick Sr., was a three-time Pro Bowl cornerback during an 11-Yr career with the Miami Dolphins and Kansas City Chiefs. He had 37 career interceptions and is fourth on the Dolphins all-time in that category.

Like his father, Surtain could quickly develop into a franchise defender. He will be an immediate starter for the team that drafts him.

Horn is an elite man-to-man defender with terrific athletic ability, prototypical size, and outstanding physicality. One of the nation’s most consistent defensive backs, he shut down top wideouts with regularity.

Horn is projected to be the second or third cornerback drafted, meaning that New Orleans will probably have to trade up from the 28th overall pick to get him. With few weaknesses in his game, he should start right away and could quickly emerge as a shutdown corner.

Jaycee’s father, Joe Horn, is New Orleans Saints royalty. Horn played 12 years in the NFL, seven of them with the Saints. During his time in New Orleans, Joe Horn had 523 receptions for 7,622 yards and 50 touchdowns, earning four Pro Bowl bids. He surpassed 1,000 yards receiving four times.

Joe Horn is enshrined in the Saints Hall of Fame. He is third all-time in franchise history in receptions, receiving yardage, and touchdown catches and owned the single-season team record for receiving yardage until surpassed by Michael Thomas in 2018. He still has three of the franchise’s top-five all-time receiving seasons.

Samuel is projected to be a 2nd round choice that could slip late into the 1st round. He’s a combative corner with good strength despite smaller size and has fluid athletic ability. Penalties have been an issue because of his aggressive nature, but he’s a technically sound player in coverage.

An all-ACC selection in 2020, Samuel improved each season with the Seminoles. He has explosive burst to the play in off-ball coverage along with his man coverage ability. He should earn slot coverage duties right away, with the skills to translate into an every down role.

Samuel’s father, Asante Sr., was a four-time Pro Bowl cornerback during an 11-Yr NFL career. He contributed to two Super Bowl championships in five seasons with the New England Patriots and was one of the league’s top corners with the Philadelphia Eagles for four years.

Molden has slipped under the radar a bit in a deep class of cornerbacks this offseason, but will be a Day 2 selection that could be a draft steal. He’s a two-time All-PAC 12 selection that has terrific instincts and ball skills.

Molden has a small frame for an outside corner. He’s a physical player with great tackling ability and natural coverage skills. Some scouts project him as a safety, but his coverage ability will also make him an immediate contributor as a slot corner.

Elijah’s father, Alex Molden, was the 11th overall pick by the Saints in the 1996 draft out of Oregon. Alex played eight years in the NFL at cornerback, including five with New Orleans. Eight of his 12 career interceptions came while with the Saints, and also six of his eight career sacks.

Alex Molden, along with Joe Horn, was part of the 2000 New Orleans team that won the first playoff game in franchise history. He departed the Saints after the 2000 season, playing his last season in 2003 with the San Diego Chargers after two years with the Lions.

Neal was a disruptive interior force for the Boilermakers. He has tremendous quickness for his size (6’3” 315-Lbs.) with an explosive first step off the snap. He had 4 sacks, 13 tackles for loss, and forced 4 fumbles in 30 career games at Purdue.

Neal missed the 2019 season with a knee injury and didn’t have a chance to show that he was fully recovered during an abbreviated 2020 campaign. He will likely be drafted midway through Day 3, but has flashed the potential to be a draft day steal.

Neal’s father, Lorenzo Sr., was a 4th round pick out of Fresno State in the 1993 draft by the New Orleans Saints. Lorenzo Sr. played 16 seasons as an NFL fullback, including 4 stellar years with the Saints. He had just 807 career rushing yards and 6 touchdowns on the ground, 326 of those and three scores coming with the Saints.

The hard-nosed Neal was one of the best blocking fullbacks of his era and was a valuable receiver out of the backfield. He earned 4 Pro Bowl bids and was voted to the All-NFL 2000s team. Neal was a teammate of recently retired New Orleans QB Drew Brees from 2003 to 2005, finishing his career with the Ravens in 2008.

Lorenzo Jr., like the cornerbacks listed, fits a position of need for the Saints. New Orleans has had success at finding unheralded talent at defensive tackle in the last few years. Taylor Stallworth, Shy Tuttle, and Malcolm Roach have all made vital contributions after coming to the team as undrafted rookies.

With their past success at adding players with NFL lineage, we could also see one or more of these college prospects in a New Orleans uniform in 2021.