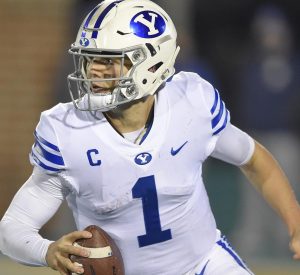 BYU quarterback Zach Wilson dazzled with his arm strength during his pro day Friday, which should further solidify his status as a top-five pick in the 2021 NFL draft.

Wilson, who shot up draft boards during a 2020 season when he racked up 33 touchdowns and just three interceptions, has showcased a unique ability to make deep, accurate throws on the run, and the Cougars staff made sure to put that on full display Friday.

Given the high-end success in recent years of younger quarterbacks like the Kansas City Chiefs‘ Patrick Mahomes, Buffalo Bills‘ Josh Allen and Baltimore Ravens‘ Lamar Jackson, all of whom can escape the pocket and deliver strikes on the run, Wilson being able to heave the ball deep down the field, even when forced to throw across his body, is going to attract the attention of scouts.

In other news, Zach Wilson has a literal cannon

Wilson would have needed to totally flop in his pro day throwing sessions in order for his draft stock to be affected, and that didn’t happen. The arm talent matched his eye-popping numbers from his junior season.

There may still be questions asked by NFL front offices about 2019, when the 6’3″, 210-pounder finished with just 11 touchdowns and nine interceptions in nine games after offseason shoulder surgery, but everything that’s happened since the start of 2020 suggests he’s an elite draft prospect.

What stands out most about @zachkapono1? 💪

@MoveTheSticks breaks down the @BYUfootball QB ahead of the #NFLDraft 👇 https://t.co/qVf6efT5LM

So the question now focuses on where he’ll land when the draft kicks off April 29. The tea leaves are currently pointing toward the New York Jets, who own the second overall pick, with the Jacksonville Jaguars expected to select Clemson signal-caller Trevor Lawrence at No. 1.

ESPN’s Rich Cimini reported Jets general manager Joe Douglas was “high” on Wilson ahead of the pro day, and the team sent a notable contingent to watch the 21-year-old Utah native throw in person:

Remember, the limit for each team is three guys.

Wilson didn’t tip his hand about a preferred destination, saying he’d be “happy to play with any team that drafts me,” but did praise the Jets when asked about their potential interest.

“Great staff. Love those guys,” he told reporters. “Joe Douglas is a great guy. It was good to see him out here. They’ve got a good thing going.”

If the Jets do select Wilson, that would likely mean incumbent starter Sam Darnold, the No. 3 pick in the 2018 draft, could become available in a trade before the start of the 2021 season.

Jets could pick Zach Wilson second overall after taking Sam Darnold with the third pick in 2018 Draft. If that happens, they would become the first team in the Common Draft Era, since 1967, to select two QBs in the top three overall picks in a four-year span, per @EpKap.

Should New York go in a different direction, the San Francisco 49ers would move into the wheelhouse for the BYU quarterback. The Niners swung a trade earlier Friday to acquire the third overall pick from the Miami Dolphins, a move that strongly suggests they’re in the QB market.

I spoke to @49ers GM John Lynch after the team traded up to No.3. The move was made to select a QB and I caught up with Lynch at BYU QB Zach Wilson’s Pro Day. 🤔 From Path to the Draft @nflnetwork https://t.co/KTRZbdf1WS

With three quarterback-needy teams atop the draft order, it’s hard to imagine Wilson waiting too long to hear his name called in Cleveland next month.

He should be a Week 1 starter and an Offensive Rookie of the Year contender wherever he ends up.