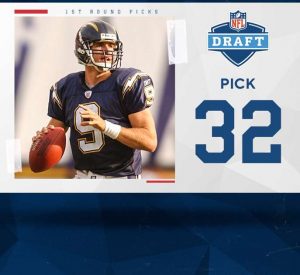 We’re closing in on the 2021 NFL Draft and with it comes the injection of immense talent and youth to the league. Of course, this draft, in particular, is hyped thanks to who is poised to be the No. 1 overall pick and what his potential could be at the next level. While Clemson phenom Trevor Lawrence deserves all that anticipation, game-changing talent can be found all across the draft board. That brings us to our activity today. Starting with the No. 32 overall selection, we here at CBS Sports have taken on the task of finding the best of the best who were ever selected in what is now known as the first round (first 32 picks).

We’ll be covering each spot in the first round all the way until we reach No. 1 overall on the Tuesday before the draft, which officially kicks off on Thursday, April 29 at 8 p.m. ET. To follow along on who makes each top five, check out our hub of all the action here.

As for the No. 32 pick, it is a bit more complex than other selections that we’ll dissect as we go forward. Because there were not 32 teams in the NFL at certain periods, some of these selections that you’ll read about below weren’t even first rounders, but would have been had they entered the league today. How we determined who actually made the cut was a combination of their impact to the league, longevity, accolades, and — more simply — a gut feel of whether or not they are worthy of entering this exclusive class.

This year, the Tampa Bay Buccaneers are slated to pick No. 32 overall. Our CBS Sports draft analysts have pegged the likes of Alabama running back Najee Harris, Tulsa linebacker Zaven Collins, Penn State edge rusher Jayson Oweh, and Clemson back Travis Etienne as some of the potential candidates to could be taken at that spot in their most recent mock drafts. Could one of those players one day make it onto this list? Of course! In the meantime, let’s see who are the top five No. 32 picks of all-time.

The Patriots were fresh off their second Super Bowl title of the Tom Brady era when they decided to give Brady another pass-catching weapon in Benjamin Watson. While the Georgia product didn’t play much during his rookie season, New England didn’t miss a beat, beating the Philadelphia Eagles in Super Bowl XXXIX, which remains the lone championship of Watson’s career. Despite not getting another ring, Watson proved to be a well-rounded tight end that played an eye-popping 15 years in the NFL.

Not only did Watson display a tremendous amount of longevity, but he was highly productive. He currently ranks 18th on the all-time receiving yards list for the tight end position with 6,058 yards. He’s also 14th all-time in touchdown receptions (44) and tied for 13th in receptions (547). When you account for the tight end position not being as popular as it is today in modern offenses and the league being less pass-happy even dating back to the early 2000s, those numbers are not too shabby at all.

On top of his play on the field, Watson has been a strong ambassador to the game off it and was the recipient of the Bart Starr Award back in 2018, which is an honor bestowed on a player who “best exemplifies outstanding character and leadership in the home, on the field, and in the community.”

While Watson’s career likely won’t result in a gold jacket, when you put together the overall body of work that he produced over his career, any team should be thrilled to get this type of return at No. 32 overall.

We’re, of course, projecting here a bit because Jackson has only been a starting quarterback for two-and-a-half seasons. That said, the collection of players that have been taken at No. 32 overall isn’t as pristine as other spots in the draft over the course of history and Jackson has already put a number of impressive marks on his résumé. During his first full season as the Ravens starter in 2019, Jackson took the league by storm. He won league MVP honors while also breaking the single-season rushing record by a quarterback that was previously held by Michael Vick with 1,206 yards on the ground. Jackson is also the first quarterback in NFL history with multiple 1,000-yard rushing seasons after tallying 1,005 yards in 2020.

Already, Jackson is 12th on the all-time rushing yards list for a quarterback with 2,906. Vick holds the record with 6,109 yards, which he accomplished over 143 games played. That gave him approximately a 42.7 rushing yards per game average for his career. Jackson is currently averaging 63.2 yards per game and should be well on his way to becoming the greatest rushing quarterback in league history (health permitting). While Jackson may ultimately be remembered for his tremendous ability with his legs, don’t sleep on his arm. During that MVP season, he led the league in touchdown passes (36) and has yet to throw double-digit interceptions over the course of a season.

Again, this is admittedly a little early to hold Jackson in such high regard but if he keeps on this trajectory, he could climb even higher on this list in short order.

Despite being one of the best players to ever put on a Patriots uniform during New England’s two-decade-long dynasty, Logan Mankins is one of the few who does not have a Super Bowl ring to his name. Even with the lack of a Lombardi on his résumé, Mankins put together a stellar career after he was taken in the first round out of Fresno State.

He was a seven-time Pro Bowler and received six All-Pro nods (one first-team, five second-team). Mankins is a member of the Patriots All-2000s and All-2010s Team along with being a piece of the franchise’s 50th Anniversary club. His approximate value of 106 is tied for eighth in team history. Aside from the legendary John Hannah, he’s the greatest interior lineman in team history.

Mankins was also as durable as they come, playing at least 15 games in nine of his 11 years in the league. He also displayed tremendous toughness after playing through a torn ACL for the bulk of the 2011 season.

While Mankins is an all-time Patriot, he’s also looked at as a general great player in the league, being named to the NFL’s All-Decade Team for the 2010s. With all that in mind, there’s no reason to not expect to see him one day land in Canton, Ohio as a member of the Pro Football Hall of Fame, which makes him one of the greatest No. 32 overall picks ever.

Speaking of Hall of Famers, let’s take a look back at the career of Bob St. Clair. ‘The Geek’ was the No. 32 overall pick back in 1953, but in those days that pick took place in the third round. Despite that third-round billing, St. Clair had quite the career for himself. The 6-foot-9, 265 pounder received nine All-Pro nods (five first-team, four second-team) along with five Pro Bowl nominations. He played his entire 11-year career with the San Francisco 49ers and was said to be one of the more well-rounded linemen of his time, providing elite pass protection and sturdy run blocking.

Not only was St. Clair elite along the 49ers offensive line, but he also was used on defense and special teams at times. Early in his career San Francisco deployed him on defense in goal-line situations and is credited for 10 blocked field goals on special teams during his career. Similar to Mankins above, St. Clair was also said to be extremely tough and durable, consistently playing through injuries.

The California native is also a member of the NFL All-Decade Team for the 1950s and was inducted into the Pro Football Hall of Fame back in 1990. His No. 79 is also currently retired by the Niners.

Pretty obvious, right? Drew Brees is far and away the greatest player to ever be selected No. 32 overall as he’s looked at as one of the greatest quarterbacks that the NFL has ever seen. At the time of his retirement announcement earlier this offseason, Brees sits as the all-time passing yards leader and the only quarterback in NFL history to throw for over 80,000 yards. He’s also thrown the most completions in league history and is No. 2 all-time for career passing touchdowns with 571, only looking up to Tom Brady.

Similar to St. Clair, Brees is not a former first-rounder, despite being taken No. 32 overall. Back in 2001 when the Chargers took him out of Purdue, the No. 32 pick was in the second round. Brees spent the first five seasons of his career in San Diego before landing with the New Orleans Saints in 2006 and really took off as a clear-cut future Hall of Famer. He led the league in passing yards seven times and passing touchdowns four times over his 15 yards in New Orleans. He received 13 Pro Bowl appearances over his career and was named All-Pro five times (one first-team, four second-team).

Not only did Brees enjoy personal success with the Saints, but he was also able to help the franchise to a Super Bowl XLIV title where he earned Super Bowl MVP honors. New Orleans has also been a routine fixture in the postseason over his tenure.

He’s one of the most prolific passers in NFL history and a no-brainer for the greatest to ever be taken No. 32.