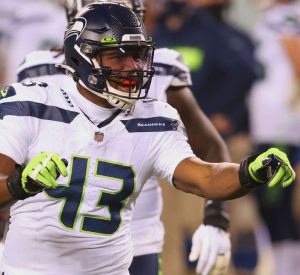 SEATTLE — As some Seattle Seahawks fans fretted over their team’s inactivity at the outset of free agency, general manager John Schneider did what he typically does, letting other teams spend big money while waiting for the right deals to come to him.

That patient approach has delivered mixed results over the years, but there’s no disputing how well it just worked for the Seahawks in putting together one of their deepest collections of edge rushers in recent memory.

That group went from the Seahawks’ biggest remaining need after the first week of free agency to potentially the strength of their defense after Seattle doubled up with Benson Mayowa and Kerry Hyder Jr. on team-friendly deals, then tripled down by bringing Carlos Dunlap back for less than what he would have made had they not released him earlier this month.

That deal came together Thursday, 10 days after the start of the negotiating window.

What you need to know about the Seattle Seahawks:

Between those three, safety Jamal Adams and a handful of promising young ends, coach Pete Carroll and defensive coordinator Ken Norton Jr. have to like their options off the edge — even though some of the young players are unproven and they had to release defensive tackle Jarran Reed to make those additions possible.

Still, it might be as deep and strong of a group as the 2013 group that helped Seattle win Super Bowl XLVIII.

If nothing else, it will help the Seahawks avoid a repeat of the first half of last season, when lack of firepower up front contributed to a historically poor start for their defense. Everything turned around when Dunlap arrived in an October trade and Adams returned from a groin injury. The Seahawks managed only nine sacks over their first six games, then led the league with 37 over the final 10.

Adams led the team with 9.5 sacks to set the NFL single-season record for a defensive back. Dunlap had five sacks in eight games with the Seahawks. His impact on their pass rush and the way it struggled before his arrival led some observers to think that Seattle had no choice but to keep him for the final year of his contract — even at an unwieldy cap charge of $14.1 million.

But Dunlap agreed to restructure his contract in order to facilitate his trade to Seattle with the understanding that the Seahawks would release him and let him test free agency if the two sides couldn’t agree to an extension. And while an extension would have lowered his cap number to something more manageable for Seattle, figuring out a deal that made sense for both sides was much easier said than done.

By releasing Dunlap, the Seahawks were betting that they could either re-sign him or find his replacement(s) for less than what they would have paid him. Part of that calculus was their belief that with the entire league feeling the pinch of a reduced salary cap, teams will have to move on from productive but high-priced players this offseason, giving the Seahawks viable alternatives to Dunlap if they couldn’t re-sign him. With the lower cap and Dunlap’s age, they projected that his market would bear something closer to their preferred price than to $14.1 million.

That means the combined guaranteed money in the two-year deals for all three players is only $2.15 million more than what Seattle would have owed Dunlap in 2021 by keeping him on his last deal.

Hyder had a career-high 8.5 sacks last season with the San Francisco 49ers. Mayowa had six for Seattle.

The young edge players that will return for Seattle are Alton Robinson (four sacks as a rookie in 2020), L.J. Collier (three), Rasheem Green (two) and Darrell Taylor. Linebacker Bobby Wagner (three) will continue to be part of their pass rush, as will defensive tackle Poona Ford (two) — who improved that part of his game last season and just got a two-year deal as a restricted free agent.

Taylor, last year’s second-round pick, is the wild card of the group. He didn’t play as a rookie due to a college leg injury, although his return to practice late in the season bodes well for his chances of getting on the field in 2021.

• Reich must deliver after Wentz trade
• Panthers’ Reddick has a lot to prove
• 49ers’ FA success still leaves holes to fill
• Giants have flexibility with No. 11 pick
• Would Vikings trade up to draft OT Sewell?

Even with the question of how much Taylor will contribute, the overall collection of edge-rushing talent evokes memories of 2013. That Seahawks team was so deep on the edge that Michael Bennett and Cliff Avril spent most of their first seasons in Seattle coming off the bench behind Chris Clemons and Red Bryant. The Seahawks tied for eighth in sacks but led the league in pressure percentage by a wide margin en route to a 13-3 regular season and the franchise’s lone Super Bowl title.

That group also got interior production from Clinton McDonald, something the Seahawks will have to find with Reed no longer manning the middle. They brought back Al Woods to give them a candidate to replace Reed on early downs, but he’s not going to factor into their pass rush.

The $23 million deal Seattle gave Reed last year, a big bet at the time, was a swing and a miss in retrospect.

But their additions of Mayowa, Hyder and especially Dunlap look like a collective home run.