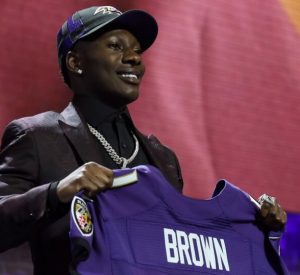 With the 2021 NFL Draft quickly approaching, the excitement is growing as dynasty GMs prepare for rookie draft season. There’s plenty of great discussion about rookie rankings and rookie draft strategy, but it’s important not to forget about veteran players amidst all the rookie fever.

Here are a few dynasty sells to consider trading away prior to the NFL Draft, as these player are potentially at risk of being usurped by a rookie, or at the very least they could see fewer touches with a rookie addition complementing them. ADP data used is courtesy of Dynasty League Football as of March 2021.

Say what?! Your dynasty football league isn’t hosted on Fantrax? Unthinkable! Check out all the features Fantrax has to offer, and we think you’ll be singing a different tune for next season.

Dynasty GMs shouldn’t be looking to sell Tee Higgins just to sell, but if any league mates are overvaluing him as the Bengals’ undisputed no. 1 receiver going forward, it’s worth looking into trading Higgins away. Many are mocking an offensive lineman like Penei Sewell or Rashawn Slater to Cincinnati with the no. 5 overall pick, but there remains a distinct possibility that the Bengals could instead choose to reunite Joe Burrow with former college teammate Ja’Marr Chase. In fact, there is a growing drumbeat of rumors that Burrow is even pushing for such a reunion, which could make sense given the deep class of offensive linemen in 2021 with 12 tackles expected to be selected inside the top-100 picks.

Chase’s potential addition would relegate Higgins to the no. 2 wide receiver role in Cincinnati, or at best the 1B role, and cap Higgins’s touchdown upside. With the looming risk of the Bengals drafting Chase at no. 5 overall and waiting to bolster the offensive line with their no. 38 or no. 69 overall pick, Higgins is valued at his ceiling at his current ADP as a top-12 dynasty wide receiver. With names like Keenan Allen, Allen Robinson, Brandon Aiyuk, and Darren Waller all being drafted behind him, it’s worth at least exploring the possibility of selling Higgins for any of the aforementioned players plus a second-round rookie pick or prospect to mitigate the risk of the Bengals adding another impact receiver. It might also make sense to consider selling Higgins for a top-six rookie pick in superflex leagues or a top-three rookie pick in 1QB formats.

It would appear that Marquise Brown‘s dynasty value has more or less survived free agency since the Ravens tried and failed to sign both JuJu Smith-Schuster and T.Y. Hilton, both of whom preferred to re-sign with their original teams rather than chance it in Baltimore. Instead, the Ravens had to settle for Sammy Watkins on a one-year, $6 million deal. But even so, Baltimore could still target a long-term solution at wide receiver opposite Brown with one of their seven draft picks in 2021.

There’s already plenty of concern about Brown’s ability to consistently produce each week in fantasy in the league’s most run-heavy offense two years running, and while Watkins may not be anything special at this point in his career, he’s still an upgrade over Dez Bryant and Myles Boykin from 2020. Plus, the Ravens traded for Josh Oliver to complement Mark Andrews and Nick Boyle at tight end, which could further dilute target distribution. The possibility of Baltimore adding yet another pass-catcher via the draft could be disastrous for Brown, on whom the dynasty community is already tepid. Outside of best ball formats, Brown is a recommended dynasty sell for a mid second-round rookie pick or better in superflex formats and an early second-round rookie pick or better in 1QB leagues.

After rumors of Miami’s interest in Aaron Jones, there was concern about Myles Gaskin‘s role next season. Since Jones has re-signed with the Packers, Gaskin’s stock has gradually crept upwards, but he may not be out of the woods just yet. Gaskin remains among the list of dynasty sells with the Dolphins likely to add a rookie running back, as they currently hold five picks in the first three rounds of the draft.

As a rookie in 2019, Gaskin’s role in the offense grew in the second half of the season prior to being placed on injured reserve with a high ankle sprain. And while Gaskin performed admirably last season as the Dolphins’ lead back and averaged a 70 percent snap share on offense, he missed four games with an MCL sprain. Miami may have concerns about Gaskin’s 5’9, 205 lb. frame withstanding a heavy workload. At best, Gaskin will lead the backfield alongside a complementary back; at worst, he could be relegated to a lesser role if the Dolphins select a premium rookie running back in the late first or early second round. Gaskin is a fine hold in dynasty, but he’s worth moving on from at the price of a mid second-round rookie pick or better in superflex formats and an early second-round rookie pick or better in 1QB leagues.

Like Gaskin, Chase Edmonds measures in around 5’9, 205 lbs. and currently sits atop the depth chart, but that could easily change in the near future. Following the Cardinals’ signing of A.J. Green, it seems apparent that they’re looking to make a playoff push and are willing to gamble on productive veterans with injury risk. This opens up the possibility of Arizona taking a chance on a one-year deal with a running back with injury questions who has yet to find a home, like Todd Gurley or James Conner.

However, unlike the Dolphins, the Cardinals don’t have much draft capital to work with this year with just two top-50 picks, one fifth-round pick, and two seventh-round picks. Though Arizona is likely to add another late-round running back if they don’t sign a free agent to complement Edmonds, the odds are better that Edmonds would at least remain the lead back over a rookie with late-round draft capital. Still, Edmonds would be still worth selling for an early second-round rookie pick or better in superflex leagues and a mid second-round rookie pick or better in 1QB formats.

Dynasty GMs should be wary of “bridge” quarterbacks like Jared Goff, Teddy Bridgewater, and Drew Lock, all of whom may only be keeping the seat warm for their eventual rookie replacements. Detroit, Carolina, and Denver hold the seventh, eighth, and ninth overall picks in the 2021 NFL Draft, respectively. Not only is there speculation about one or more of these three teams selecting a quarterback at these picks, but there’s also the possibility that one of them could trade with Atlanta to move up to no. 4 overall to draft a quarterback.

After the Rams jettisoned Goff as part of the deal to acquire Matthew Stafford, Goff’s future as a starter in the NFL is tenuous at best. Bridgewater has less than three full seasons as a starter under his belt, and it’s unlikely that the Panthers view him as their long-term answer at quarterback. And as for Lock, he’s been inconsistent, having displayed highlight reel-worthy plays at times but also having struggled with turnovers. With the Broncos having assembled a fearsome defense, this could prompt an aggressive move to immediately resolve their questions at quarterback in a bid to contend. All three of these quarterbacks are dynasty sells at the price of an early second-round rookie pick or more in superflex leagues and just about anything in standard 1QB formats.

The Jets just signed Corey Davis to three-year, $38 million contract, but his high salary hardly guarantees fantasy production. It remains to be seen as to whether Davis can function as a team’s true No. 1 wide receiver absent A.J. Brown drawing coverage, and with five draft picks in the first three rounds, it’s still possible for the Jets to add another impact rookie wide receiver. Davis is another name among the dynasty sells for a mid second-round rookie pick or more.

The same goes for Josh Reynolds, who filled Davis’s vacated no. 2 role in Tennessee. With four draft picks in the first three rounds, the Titans are unlikely to head into the 2021 season with only Brown and Reynolds at wide receiver, no matter how much they trust in the offense running through Derrick Henry. Reynolds is a clear sell for an early third-round rookie pick or more.

For more fantasy football content, follow me on Twitter @FFA_Meng. Also, check back for more, as we’ll be covering the dynasty football angle all year round.

Fantrax was one of the fastest-growing fantasy sites of 2020, and we’re not letting our foot off the pedal now! With multi-team trades, designated commissioner/league managers, and drag/drop easy click methods, Fantrax is sure to excite the serious fantasy sports fan – sign up now for a free year at Fantrax.com.