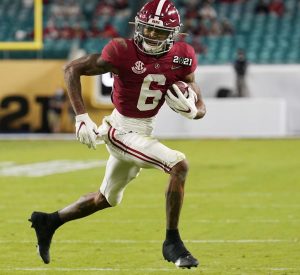 Entering the offseason, it was clear the Philadelphia Eagles weren’t going to be major players during free agency. They didn’t have the financial flexibility to make any huge signings, so they’ve been restructuring players’ contracts and haven’t added much to their roster.

However, Philadelphia will have an opportunity to address some of its needs during the 2021 NFL draft on April 29-May 1, although it no longer owns the No. 6 overall pick after recent trades shook up the top of draft order.

So, while there won’t be as many players available when the Eagles are first on the clock, this move should help them in the long run, as they’ll have an extra first-round selection next year.

And Philadelphia will still be able to add some strong players to its team in this year’s draft, too.

Here’s a look at the Eagles’ biggest needs to address in the NFL draft this year.

The Eagles took a wide receiver in the first round of last year’s draft, and it’s possible they’ll do the same in 2021. This time, though, it could lead to more immediate results.

Jalen Reagor was taken by Philadelphia with the No. 21 overall pick in 2020 but had a bit of a disappointing rookie season, notching 31 receptions for 396 yards and one touchdown in 11 games. It’s possible he’ll take a big step forward next season and could boost the Eagles’ receiving corps in future years.

However, Philadelphia still needs to add at receiver even if Reagor does eventually live up to his potential. Veterans DeSean Jackson and Alshon Jeffery are gone, and the Eagles’ current top players at the position include Travis Fulgham and Greg Ward. If quarterback Jalen Hurts is going to have success leading the offense, he’ll need a stronger playmaker or two to throw to.

The top wide receivers in this year’s draft class are Ja’Marr Chase of LSU and Alabama standouts DeVonta Smith and Jaylen Waddle. At No. 6, Philadelphia may have had its pick of the trio. That may no longer be the case at No. 12, but it also wouldn’t be surprising if it still ends up landing one of the three to give its offense a much-needed boost.

There are several areas of the Eagles’ defense that need improvement, and that includes the linebacker corps. Philadelphia brought back Alex Singleton as an exclusive rights free agent, which was a smart move, but it still could benefit from adding a linebacker early in the draft.

With Jonathan Gannon taking over as defensive coordinator, the Eagles’ defense is likely going to look a bit different moving forward. And it will be important for them to add the right players for his scheme so that the unit will perform at a higher level than it has recently.

If that’s going to happen, Philadelphia could use a young middle linebacker to build around, as well as some better depth on the outsides. Maybe it could consider adding a linebacker in the first round if the top receivers are no longer on the board (Penn State’s Micah Parsons is among the best in the class), or it may wait until a later round.

Either way, this is a position that isn’t yet strong enough for the Eagles’ defense to turn things around in the near future. But they could fix that by adding a linebacker or two during the draft.

Despite losing Jalen Mills during free agency, the Eagles’ secondary isn’t in much worse shape than it was at the end of the 2020 season. That’s because they signed safety Anthony Harris to a one-year deal, which could end up being their most noteworthy free-agent acquisition of the offseason.

Philadelphia still needs help in the secondary, though, particularly at cornerback. It’s set at one starting spot with veteran Darius Slay, but it needs another starter with Nickell Robey-Coleman now a free agent and potentially not returning.

Even if the Eagles don’t draft a cornerback who can start immediately, they could add one who may develop into a future stalwart. Plus, Slay is 30 and could eventually regress in form, so Philadelphia should add some young talent at the position to be better set up for the long term.

It’s still possible the Eagles could add to their defense via free agency, including at cornerback, but it’s unlikely to be a big-time signing. So, given the state of the team’s secondary, it needs to add a cornerback during the draft, even if it’s not until the mid-to-late rounds.