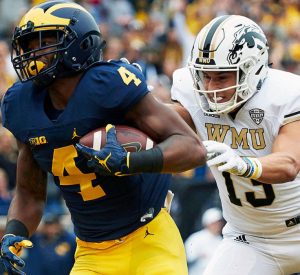 Nico Collins was named the Alabama Sports Writers Association 2016 All-State first team in his senior year coming out of Clay-Chalkville High School in suburban Birmingham. He received 20 offers including those from powerhouse schools like Alabama, Georgia, LSU and Florida — but he chose Michigan. “Mainly, if you’re recruited to Alabama, you go to Alabama,” Collins said, via AL.com. “But I saw it as an opportunity to be different, and I feel that’s what I did. I feel like it was best for me.”

After a collegiate career that included inconsistent quarterback play and passing game disarray from a coaching standpoint, it’s fair to wonder if Collins regrets that decision.

Regardless, the former big-time prospect has the frame and tools that translate to the next level. The last Michigan receiver prospect who suffered from poor QB play and a bad pass game was forgotten and lasted all the way until the sixth round of the 2020 NFL Draft. If you ask the Browns how they feel now about selecting Donovan Peoples-Jones so late into Day 3, a rookie who made an immediate impact in Cleveland after Odell Beckham landed on IR, they might tell you it was their best value pick in the entire class. Collins and Peoples-Jones are different types of prospects, but the right NFL team, with an offensive system that fits Nico’s skill set, could be getting a major value this April.

We’re breaking down everything you need to know about Collins from a Fantasy manager perspective, including best fits, Dynasty outlook, measurables, scouting report, key stats and an NFL comparison.

When it comes to finding a fit for Collins, the key thing to look for is a vertically-attacking offense. Although schematically speaking, Matt LaFleur’s offense isn’t as vertically-oriented as say a Bruce Arians or Dirk Koetter attack, Aaron Rodgers does an excellent job taking advantage of one-on-one opportunities down the field. Playing on the opposite side of Davante Adams will afford Collins plenty of vertical opportunities. It’s also a nice bonus that Rodgers’ forte — ball placement on back-shoulder fades — fits perfectly with Collins’ forte — body control and hands in contested-catch situations.

On paper this might not seem like the best fit, and it certainly won’t be for Year 1, but in Dynasty leagues pairing Collins with Tom Brady and Arians might just be the highest-upside route. Collins’ best chance of succeeding at the next level is pairing up with an offense that constantly takes shots down the field. Enter Arians’ Bucs. Tampa likely won’t be able to afford to re-sign Chris Godwin next season, and Collins can step right into that role. Fellow Wolverine Brady is an excellent QB to pair with Collins’ size and catch radius in the red zone.

The Chargers currently have a better version of Collins in Mike Williams on the roster, but he’s had trouble staying healthy and will become a free agent next offseason. Collins can slide into that role in Year 2, but can also provide an impact for a vertically-oriented QB like Justin Herbert in Year 1 down the field and in the red zone.

The Dynasty community loves Collins’ upside with a 6-4 frame, and that love is growing after Collins showed up 15 pounds lighter at the Senior Bowl and had a strong week against some of the top corners. I recently participated in a mock rookie draft where Collins went off the board at the end of Round 3 — that’s the highest I’ve seen him go so far. His value is largely contingent on where he lands.

Collins is a difficult player to find an NFL comp for because he profiles somewhere between Laquon Treadwell and Michael Thomas (Saints), but he’s closer to Treadwell on that scale. His lack of explosion and flexibility off the line of scrimmage could hold him back from creating separation and finding success at the NFL level, but his freakish catch radius, strong hands and physicality make him a nice fit in the red zone and in vertically-oriented offenses. I’ll settle on comping Collins to a poor man’s Mike Williams (Chargers).