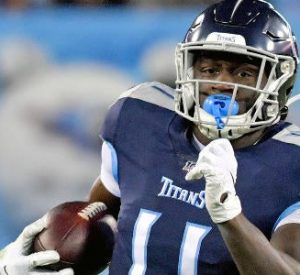 The Fantasy football research process has become more efficient over time as the collective space has worked together to weed out the noisy stats and let the cream rise to the top. Generally speaking, today’s most commonly referenced stats also are some of the most highly correlated to Fantasy production. If you’re interested in advanced stats, I’ve put together an Advanced Stats Guide for Fantasy Football to help familiarize readers with the stats he references the most frequently.

I believe there are still improvements that can be made to the Fantasy research process. One key insight I’ve uncovered is an overlooked advanced metric called targets per route run (TPRR), which has a stronger correlation to Fantasy points than even the staples of Fantasy WR analysis, such as targets, air yards, or red zone data.

The cutoff point of 60 targets is admittedly arbitrary, but the reasoning for finding a cutoff point was not. Because we’re examining a rate stat, the volatility increases rather drastically the lower the target total is, which in turn increases the randomness of the correlation results.

Also, if you find yourself wondering which of targets or TPRR correlates more highly with year-long Fantasy scoring, of course, the answer is targets. No matter how high a player’s TPRR is, he can only accumulate Fantasy points while on the field. So, as with any other stat, additional context is needed when considering how to properly use TPRR to evaluate a player’s Fantasy outlook.

Ultimately, TPRR is a representation of a player’s ability to demand targets from his quarterback. It displays the percentage of his routes on which he is targeted. Changing factors within an offense can cause a player’s TPRR rate to fluctuate; no stat is perfect. But generally speaking, especially among the top receivers, TPRR rates remain fairly constant — at least compared to many more frequently used Fantasy stats.

Here are just a few examples of how TPRR data points to potential breakouts Fantasy managers will want to know.

Posting a TPRR above 20 percent as a rookie is impressive. Following that up with a 31 percent increase in Year 2 really put Thomas in rarified territory. His ascent peaked in 2019 with an NFL-record 149 catches made possible by a massive 30.1 percent TPRR rate.

Anderson’s encouraging early-career signs suggesting that a breakout was imminent in the post-Adam Gase era:

After a rough rookie season, Anderson bounced back and was targeted on one-fifth of his routes in Years 2 and 3. Then Adam Gase came along and decided to use Anderson as nothing more than a vertical route runner. He jacked Anderson’s average route depth up by 14.4 percent in 2019, which caused Anderson to be targeted at the lowest per-route rate of his career.

Anderson’s average route depth dropped from 10.1 yards downfield in 2019 to 7.5 with the Panthers in 2020, and he was targeted at the highest rate of his career. Demanding a 23 percent TPRR as a 24-year-old second-year receiver is really impressive; for reference, Anderson’s TPRR was higher than Davante Adams’ in 2017. It’s good to see him able to pick up where his promising career left off before it was derailed by Gase for one year.

Adams’ insane 29 percent TPRR in 2019 went under the radar because of injuries:

After finishing with a respectable 21.4 percent TPRR rate (27th among 102 qualified players) in 2017, Davante Adams’ rate rose to a top-10 mark in 2018. He played just 12 games in 2019, but Adams’ 29 percent TPRR rate suggested that he was entering his own class as a target hog. Adams’ 2019 season perfectly exemplifies why it is crucial to research target data on a per-route basis; if you simply looked at his season-long numbers, you might not have realized that he made another massive jump from 2018 to 2019.

Adams’ career progression and increasing opportunity culminated to produce a massive 31.5 percent TPRR rate in 2020 — the highest mark for any player since TPRR data became available in 2017. In terms of steady year-over-year TPRR improvement, Adams is the prototype.

Brown has the potential to jump into the stratosphere next season after his huge improvement in TPRR in Year 2:

Who is going to be “this year’s Davante Adams?” The most likely answer is “no one,” considering Adams finished with the third-most single-season receiving touchdowns ever in just 14 games in 2020. But if I had to put my money on one player to make an Adams-like leap in 2021, my bet would be on A.J. Brown.

The more I dig into Brown’s statistical profile, the more it becomes clear that he is on the verge of something big. Since 2017, Brown’s 24.9 percent TPRR rate is by far the highest mark of players under the age of 24. Not only did he increase his TPRR by 16.4 percent from Year 1 to Year 2, Brown did it while continuing to operate as a downfield weapon. Only he, Adams, and Calvin Ridley posted a TPRR above 24 percent while also averaging more than 2.75 air yards per route run.

Brown didn’t stop at making offseason improvements from Year 1 to Year 2, we actually saw him improve his TPRR on a week-by-week basis as the 2020 season rolled on. He returned from injury after Tennessee’s bye in Week 4 and averaged 25.6 targets per route run from that point on. In the second half of the season, Brown’s TPRR was up to 26.9 percent. In the final five games of the regular season, Brown had an elite 28.2 percent TPRR rate. In Tennessee’s one playoff game, Brown was targeted on 29.6 percent of his routes.

Perhaps the most ridiculous part of all of this is the fact that Brown reportedly played through injuries to both knees in 2020. While playing banged-up and competing for targets with an emergent Corey Davis, Brown was still able to command his QB’s attention at one of the highest rates ever recorded by a 23-year-old. With Davis and Jonnu Smith both playing for new teams in 2021, there’s a chance Brown’s TPRR could skyrocket in his third season.

We’ve seen enough to be confident that the otherworldly efficiency is no fluke — if Brown can continue to make strides in his TPRR in the years to come, he has all the makings of an annual WR1 candidate for Fantasy. And if Brown’s TPRR rate in 2021 ends up anywhere near what we saw from him towards the end of the 2020 season, it wouldn’t surprise me at all to see him lead all Fantasy receivers in scoring.

I’ll be back after the NFL Draft to share my full list of 10 pass-catchers at receiver and tight end trending upward based on TPRR data, as well as 10 such players trending downward based on that same data. I’ll also have a primer on what you need to know about TPRR as it relates to the running back position, and I’ll also be sharing a full 2020 TPRR leaderboard for you to reference. If you have any questions about TPRR until then, feel free to ask me on Twitter.