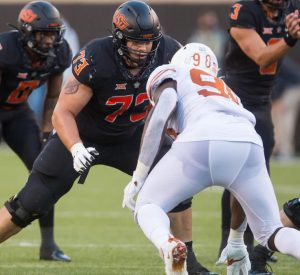 The Washington Football Team has been one of the most active teams in free agency, and it will soon have another opportunity to build its roster through the 2021 NFL Draft. While Ron Rivera has added several intriguing pieces such as quarterback Ryan Fitzpatrick, wide receiver Curtis Samuel and cornerback William Jackson, there are still holes to fill and some depth issues to address if Washington wants to repeat as NFC East champions.

Thanks to The Draft Network’s seven-round mock draft machine, we were able to run through a full draft acting as Washington’s general manager. We didn’t get to address every position we wanted to due to a couple of top-heavy position groups, in addition to how the board fell, but here is one attempt at how Washington’s 2021 NFL Draft will play out:

We would have considered selecting a quarterback at No. 19 overall depending on how the board fell, but all five of the top signal-callers were selected in the top 10. At No. 19, we were content taking a player who is a versatile offensive lineman. Not many teams like throwing a rookie into the fray on the left side of the offensive line, but maybe Teven Jenkins is a player who could handle that responsibility. He could serve as a guard or maybe at right tackle at first, but has experience playing both tackle spots and is one of the best tackles in this class.

Much like last year, it will be interesting to watch where wide receivers are taken through the first part of the draft. We know we are reaching a bit here taking Amari Rodgers out of Clemson with our second pick, but he has big-time potential at the next level. He caught 77 passes for 1,020 yards and seven touchdowns last year for the Tigers, and while Washington picked up Samuel and Adam Humphries in free agency, you can’t have enough weapons. It was tough having to watch Terry McLaurin be the only consistent wide receiver on roster last year, and this team can’t have that if they want to elevate their status as contenders. As you may have noticed from above, we aren’t done adding at receiver just yet.

Craving even more NFL coverage focusing on previews, recaps, news and analysis? Listen below and follow the Pick Six podcast for a daily dose of everything you need to follow pro football.

In the third round, we took two players on the defensive side of the ball. Jamar Johnson out of Indiana could be a hybrid safety or Washington’s next free safety. Washington has an impeccable defensive line, but needs some help at linebacker. We attempted to address that need here in the third round. One has to wonder if Pete Werner could see some starting reps in Year One. He had an impressive Pro Day this week, so who knows if he will be available at No. 82 overall?

We didn’t anticipate taking two Ohio State kids in a row, but that’s just what happened. Shaun Wade is listed as a cornerback, but it’s probably more fitting to give him the vague title of “defensive back” at this point in time. You will probably remember him as the player who injured Clemson quarterback Trevor Lawrence in last year’s College Football Playoff semifinal. We view him as a hard-hitter who knows how to rush the quarterback, loves to hit in the open field and has shown some ball skills in the past. His versatility is something we think Washington’s coaching staff would value, and it could be fun to watch him and Kamren Curl on the field together. Both players are athletes who can wear different hats on defense, which makes this formidable unit even tougher to read pre-snap.

While we may have reached on Rodgers earlier in the draft, we grabbed a potential gem in Shi Smith out of South Carolina in the fifth round. He never took over the offense during his time as a Gamecock, but he’s a slot receiver who could surprise people at the next level. Humphries is the perfect mentor for him, but with the injuries the veteran has dealt with over the past two seasons, maybe Smith could see some playing time in Year One. Definitely a bit of a project, but he has potential. Again, stockpiling weapons is something we gave attention to. Rodgers and Smith fit your prototypical “slot” role, but that doesn’t mean they have to be used there exclusively.

We wrapped up the draft by taking another offensive lineman in Drew Dalman out of Stanford, and then running back Rakeem Boyd out of Arkansas. Dalman played center in college, but could potentially play some guard. As for Boyd, running back is not exactly a huge need for Washington, but it’s always smart to explore undrafted prospects or to zero in and take one with a later pick. Boyd was featured in the popular TV series “Last Chance U”, and rushed for 1,133 yards and eight touchdowns in 2019. He opted out after six games played in 2020.

One facet of this mock draft that will irk many is that we decided not to draft a quarterback. With how the draft board fell, we didn’t see good value in choosing one with our top picks. Washington could add another signal-caller, but that should happen later in the draft if five are taken quickly. Then again, I bet rolling with Fitzpatrick, Kyle Allen and Taylor Heinicke isn’t something Rivera would be opposed to.