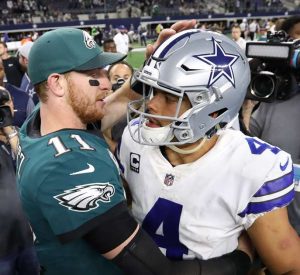 1. Buccaneers (1): “We’re keeping the band together,” per QB Tom Brady. “We’re going for two,” per head coach Bruce Arians, who kindly advises you not to use the Chiefs’ (failed) “run it back” motto. Whether or not the Bucs do become the first team to repeat in 17 years, TB12 did his part financially to keep this roster intact – OLB Shaq Barrett, WR Chris Godwin and TE Rob Gronkowski among those returning – and Arians, 68, is certainly energized to make some history in the twilight of his uniquely signature career.

In pursuit of 8…LFG @Buccaneers we’re keeping the band together pic.twitter.com/49zUwS5l3D

2. Chiefs (3): They’ve made very nice pickups on both sides of the line scrimmage – notably OL Joe Thuney and Kyle Long and DT Jarran Reed – and should get G Laurent Duvernay-Tardif back from his opt-out year, though still not clear who QB Patrick Mahomes’ tackles will be in 2021.

3. Packers (2): They managed to retain RB Aaron Jones, otherwise … Remains to be seen what kind of help GM Brian Gutekunst obtains for MVP Aaron Rodgers and Co. with the 29th pick of the draft, but this is shaping as another year when the Pack are treading water at best.

4. Rams (5): Their top-ranked defense took a few hits in free agency. But can’t wait to see what the Matthew Stafford-Sean McVay marriage – not to mention the dimension speedy WR DeSean Jackson adds – means for an offense that ranked 22nd in points scored.

5. Bills (4): They’re pretty much keeping the band together, too – even adding WR Emmanuel Sanders on keyboards and QB Mitchell Trubisky on backing vocals – though it remains to be seen if this is act is good enough, as constructed, to win a Grammy.

MOCK DRAFT: How do 49ers’ trade up to No. 3, free agency affect first round?

6. Ravens (6): They added nice pieces (WR Sammy Watkins, G Kevin Zeitler) to an offense that projects even faster, but edge rush looks like a problem given the departures of Matt Judon and Yannick Ngakoue.

9. 49ers (19): They get TE George Kittle, WR Deebo Samuel, RB Raheem Mostert, DEs Nick Bosa and Dee Ford (among others) back from injury, not to mention QB Jimmy Garoppolo … or whomever the Niners replace him with using their newly acquired No. 3 draft pick. Put this group right back in the Super Bowl discussion.

JARRETT BELL: Niners show they’re not afraid to be bold with quarterback play at top of draft

10. Seahawks (8): While the division is improving around them, they’re dealing with a damage-control offseason in the winter of Russell Wilson’s discontent.

11. Saints (10): Friendly reminder that they’re 8-1 over the past two seasons with now-retired Drew Brees out of the lineup. Case to be made this offense might even expand given QB Jameis Winston’s ability to strike further reaches of the field.

12. Colts (14): Aside from the need to replace retired LT Anthony Castonzo, everything hinges on Frank Reich’s ability to restore new QB Carson Wentz to his pre-injury, 2017 MVP-level form. Accomplish that, and this team can legitimately challenge Kansas City for AFC supremacy.

13. Cowboys (18): Locking up QB Dak Prescott made this offseason an unqualified success. But if new coordinator Dan Quinn can resuscitate this defense to just the average level, Dallas should run away with the NFC East.

14. Steelers (11): Their descent from that 11-0 high-water mark last December seems to be ongoing. QB Ben Roethlisberger returns with a reworked contract, but it’s not clear whom Big Ben is handing off to, who’s blocking for him, or who will make opponents pay for double teaming OLB T.J. Watt.

15. Dolphins (12): Their trade of the No. 3 overall pick signaled commitment to Tua Tagovailoa while bolstering Miami’s ability to continue building around the second-year passer. Free agent WR Will Fuller V should open up this offense.

16. Patriots (16): They look significantly more formidable in the wake of a highly active free agency and return of LB Dont’a Hightower to the defense. QB Cam Newton should have a much better opportunity to thrive after his mulligan year in Foxborough.

17. Cardinals (13): They added Hall of Fame talent with 2011 first-rounders J.J. Watt and A.J. Green … but it remains to be seen if Arizona spent its money in the right spots after fumbling away a playoff spot last year and crash landing to .500.

18. Washington (15): They’ve got a chance to feature the league’s top defense in 2021. They’ve also got a quarterback, Ryan Fitzpatrick, who’s never led a team into the playoffs.

19. Chargers (17): Does any team have the potential for such a wide variance of 2021 outcomes? QB Justin Herbert still needs O-line reinforcements, especially at left tackle, and it remains to be seen how Vic Fangio disciple Brandon Staley adapts his defensive philosophy to these personnel. But Bolts have a core that should be playoff caliber.

20. Falcons (21): Slotted No. 4, they may now be the team that turns the 2021 draft upside down. But the union of coach Arthur Smith and QB Matt Ryan could also help Atlanta get right side up.

21. Vikings (22): Mike Zimmer’s worst-ever defense gets better by signing CB Patrick Peterson and DT Dalvin Tomlinson. But Minnesota still needs pass rushers to get off the field … though DE Danielle Hunter might not want to be one of them.

22. Raiders (23): GM Mike Mayock made some interesting bets, blowing up his offensive line while adding DE Yannick Ngakoue and DT Solomon Thomas to a problematic defense. We wait to see where the roulette ball lands.

23. Broncos (24): Coming off a strong finish to 2019, they lost OLB Von Miller and WR Courtland Sutton straight away to injuries in 2020, while RT Ja’Wuan James opted out. Getting those starters back, plus signing CBs Ronald Darby and Kyle Fuller could re-establish Denver as a threat … if QB Drew Lock cooperates.

24. Bears (20): Even if adding QB Andy Dalton amounts to more than a lateral move, hard to make a case this team looks better than last year’s 8-8 version.

25. Giants (25): A club that amounted to more than the sum of its parts in Year 1 under rookie coach Joe Judge appears improved with the signings of WR Kenny Golladay, CB Adoree’ Jackson and TE Kyle Rudolph plus return of OT Nate Solder. Still, seems to be a gap between the G-Men and division rivals Dallas and Washington.

26. Bengals (27): DE Trey Hendrickson was a rare $60 million free agent investment. But the main things to monitor are the progress of QB Joe Burrow’s ACL recovery – it seems to be on track – and the decision Cincinnati makes with the draft’s fifth overall pick.

27. Panthers (26): Starting to seem as if circumstances could render Carolina the squad left without a seat as the game of NFL QB musical chairs continues. Barring a bold move, they might be in no man’s land on draft night.

28. Jets (30): GM Joe Douglas seemed to spend judiciously in free agency, tagging S Marcus Maye before importing WR Corey Davis, DE Carl Lawson and DT Sheldon Rankins, among others. But a defining offseason that began with the coaching hire of Robert Saleh will be truly defined by Douglas’ QB verdict … and it appears that will mean a pivot from Sam Darnold to BYU’s Zach Wilson.

29. Jaguars (29): They entered free agency with the league’s most salary cap space. Yet their relatively frugal approach might serve new coach Urban Meyer well in 2021 rather than creating outlandish expectations around presumed No. 1 pick Trevor Lawrence.

30. Lions (31): They’re in the midst of a philosophical reboot and mostly focused on the long term. New coach Dan Campbell and GM Brad Holmes may field a more competitive team in 2021 even if it’s a less talented one.

31. Eagles (28): Given its moves this offseason, including the decision to deal down from No. 6 in the draft, this is another club that appears focused beyond the 2021 campaign … pretty much ever since its Week 17 submission.

32. Texans (32): New GM Nick Caserio has been feverishly transforming this roster during free agency … even if it all seems little more than rearrangement of those proverbial Titanic deck chairs.