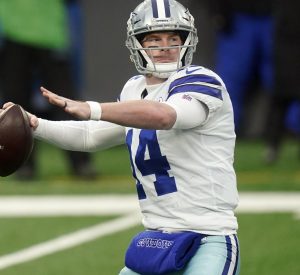 The Chicago Bears made one of the most widely panned free-agency decisions in recent history when they signed Andy Dalton to a one-year, $10 million contract this offseason.

They began the offseason by franchising Allen Robinson II to try to lure Russell Wilson, but they couldn’t put together a package enticing enough to get the Seattle Seahawks to part with their disgruntled franchise signal-caller.

Instead of getting a game-changing quarterback, Chicago is now saddled with a mid-tier veteran who hardly represents an upgrade over either of last year’s starters in Mitchell Trubisky and Nick Foles.

The Bears have to be hoping they can at least make it back to the postseason with Dalton managing the game and avoiding mistakes, but he’s a low-upside, expensive signing who won’t help build on an 8-8 season anchored by one of the league’s better defenses.

There weren’t any better options available on the open market, but the team will remain a wild-card contender at best until a long-term answer is found under center.

The Detroit Lions weren’t ever going to be a big-time market-mover after they blew things up and acquired future value as part of the trade that saw them move on from longtime quarterback Matthew Stafford.

While the team has done a good job facilitating the rebuild by shedding overpriced veterans and clearing the deck for a new regime, it did make at least one questionable signing. The Lions came to terms on a one-year, $4 million contract for wideout Tyrell Williams, who doesn’t exactly fit the bill for what the franchise needs right now.

Detroit didn’t make a run at retaining its most exciting receiver in Kenny Golladay, who cashed in with a big contract from the New York Giants, and it let a veteran fixture walk in Marvin Jones Jr., so it was a bit of a surprise to see the organization sign a 29-year-old veteran to its depleted receiving corps.

Williams has been a reliable No. 2 option during stops with the Los Angeles Chargers and Las Vegas Raiders but missed the entire 2020 campaign due to a shoulder injury. It remains to be seen how that will impact him going forward, especially if he winds up being the No. 1 wideout in Detroit.

As of now, the Lions have no one else to turn to for the job, and signing Williams, along with Breshad Perriman, likely indicates the club isn’t going to go that direction in the draft. It is a tall task for a limited wide receiver, especially with a new head coach and quarterback coming in for the upcoming season.

While the wideout is only under contract for a single season and won’t impact their long-term plans, the Lions aren’t doing Jared Goff any favors if Williams ends up being the top receiving weapon in 2021.

The Green Bay Packers were one of the quietest teams in free agency, making just a handful of low-key maneuvers ahead of a much more important draft.

You can’t blame Green Bay for wanting to keep the nucleus of a team coming off back-to-back NFC Championship Game appearances together, but it did cost a good bit of money to hang onto Aaron Jones. The club retained its starting running back on a four-year, $48 million deal, rewarding him for exceptional play over the last two seasons.

Jones has become a regular playmaker for the Packers, rushing for over 1,000 yards in each of the last two campaigns and racking up 25 touchdowns on the ground in that span. He’s also a dangerous weapon out of the backfield, piling up 829 yards and five scores on 96 catches over the last two years.

It can be tough to secure a back as reliable as Jones, and the Green Bay brass clearly didn’t want to risk striking out when trying to find a replacement.

Still, that option was available to a club that currently holds 10 selections in the 2021 draft. If the Packers had let Jones walk, they could have freed up a significant amount of money to shore up positions at which it’s more difficult to draft impact players.

The Packers also had a potential budget in-house option to replace Jones, having drafted A.J. Dillon in the second round last season. Dillon only saw action sparingly last year, but had a breakout game in Week 16 when he scored a pair of touchdowns and rushed for 124 yards on 21 carries. Opting against giving Dillon a feature role in 2021 seems like a questionable decision for a club that invested heavily into acquiring the young back.

If Jones can stay healthy and continue to produce, there will be zero regrets. But history has shown running backs tend to break down quickly after signing their second contract. The Packers are betting against that, but only time will tell if this move was worthwhile.

The Minnesota Vikings were active this offseason, but they may have made a big misstep when tinkering with their secondary.

The team decided to let a solid safety in Anthony Harris leave on the open market and elected to shore up its defensive back stable by signing cornerback Patrick Peterson. At first glance, those moves aren’t too bad, but the contract numbers simply don’t add up.

After watching Harris sign a team-friendly $4 million deal for the 2021 season with the cash-strapped Philadelphia Eagles, the Vikings shelled out $8 million to acquire Peterson on a one-year contract.

Minnesota ultimately ended up paying double what it likely would have taken to retain a steady contributor in Harris while bringing in a defensive back who is a year older and coming off a pair of disappointing seasons. Peterson has clearly lost a step from his early, Hall of Fame-caliber days with the Arizona Cardinals and has struggled to keep up in man coverage in recent years.

While the Vikings should still be able to carve out a role for the intelligent cornerback, he isn’t going to make anywhere near the type of impact he was capable of just a few short years ago.