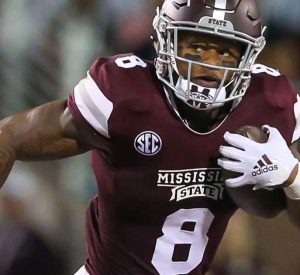 Hill enters the draft with a unique recent past. He declared for the NFL draft in 2020 but then changed his mind and returned to Mississippi State where new head coach Mike Leach was installing a pass-heavy offense. Hill played for only three games. He set the school record with 15 catches versus Kentucky, and with 158 receiving yards against LSU. He then quit the team and declared for the NFL draft, having already proven his ability to rush the ball in 2019 and then catch in 2020.


He was the only SEC back that averaged more than 100 rushing yards in 2019 and was the only Mississippi State back to rush for more than 150 yards in four games in a season. Hill was the central focus of the offense when he took over as a junior in 2019.

Hill has to battle the after-effects of opting out since other NCAA backs that did play posted good years. He considered one of the best SEC backs after his fine 2019 campaign but his success isn’t as fresh as other backs in the draft. That may work to his disadvantage, but also could end up giving his new team a high-value pick later in the draft.

The ex-Bulldog did himself a great favor with those three games in 2020 since his role as a receiver wasn’t much in his first three seasons in a run-heavy attack. His versatility can appeal to a larger set of teams as they seek to fill position needs.

Burst through the hole

Versatile back that can fit many needs

Average in the open field, can get caught

There’s no denying his impact at Mississippi State or his success in the SEC. Hill’s speed is adequate but he’s never been a breakaway threat. He’s expected to be a Day 3 selection but there’s always the chance that one team sees more in him and takes him in the third round.

He projects to be a part of a committee so his experience as a receiver looms large for his perceived value. It may have been odd to return for only three games as a senior, but his impressive showing as a receiver could net him work as a third-down back. His best success has been as a north-south rusher but he’s only average in size and squeezing through an NFL-quality defensive line will prove a bigger challenge.

Hill has the talent to contribute on an NFL team and should work himself into a rotation eventually. In fantasy terms, he’s more of a draft-and-hold player in the hopes that he falls into an advantageous situation. He won’t be drafted to be a workhorse, but he should turn into a contributor.

What verbal offers and commitments really mean for your athlete