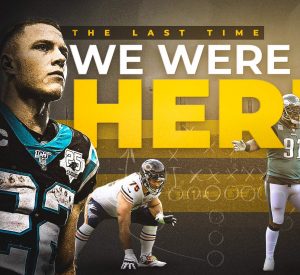 Thomas lasted seven seasons in the NFL with his first three coming as a member of the Jets. He scattered 2,236 rushing yards and seven rushing touchdowns across his career while also spending a season with the Cowboys, Patriots, and Panthers. The best season of his career came in 1991 when he logged 728 rushing yards and three touchdowns. While he enjoyed a respectable career by NFL standards, he certainly didn’t meet expectations as the No. 2 pick in the draft.

The first-ever draft pick under general manager John Lynch, Thomas played out his rookie contract and signed a one-year deal with the Las Vegas Raiders already this offseason. Thomas’ playing time declined each season in San Francisco and a knee injury limited him to just two games in 2020. Thomas will be 26 at the start of the 2021 season so there is time for him to turn the corner, but he hasn’t lived up to the promise of where he was selected four years ago.

Copeland spent all eight of his NFL seasons with the Bengals where he served as a primary starter outside of the 1998 campaign when he was only available for five games. Copeland registered 24 sacks in his career with nine of those coming in 1995, which was by far the most productive season of his career. Copeland had a decent run with the Bengals but surely Cincinnati had a larger impact in mind for the former top-five selection.

When the Lions drafted Williams in 2004, the selection came one year after Detroit selected wide receiver Charles Rogers No. 2 overall in the draft. In 2005, the Lions picked wide receiver Mike Williams with the 10th pick, making it three consecutive drafts that the Lions invested a top-10 selection on a wide receiver. The Lions took a break from picking receivers in 2006 but took yet another receiver with pick No. 2 in the 2017 draft and that was Hall of Famer Calvin Johnson. Williams had a reasonably productive eight-year career where he recorded 393 receptions for 5,715 yards and 44 touchdowns. His lone 1,000-yard campaign came in 2006.

The Panthers are no strangers to the eighth pick in the draft with 2021 marking the fourth time Carolina has held the selection since entering the NFL back in 1996. Before landing McCaffrey in 2017, Carolina found OT Jordan Gross in 2003 and RB Tim Biakabutuka in 1996 at pick eight. McCaffrey’s superstar status grew incrementally across his first three NFL seasons and he inked a record-breaking four-year, $64 million extension entering 2020. Unfortunately, injuries limited McCaffrey to just three games in 2020 and he will look to get back on track in 2021. Will the Panthers be able to turn pick No. 8 into a new franchise quarterback to pair with McCaffrey in the backfield?

When Armstrong played his last collegiate game in 1972, he finished his career as the all-time leading rusher in the Big Ten Conference and Purdue program history while also ranking sixth in NCAA history at the time. He spent all eight of his NFL seasons with Denver, collecting 4,453 rushing yards, 1,302 receiving yards, and 32 total touchdowns. His best season came in 1974 when he racked up 1,407 rushing yards and more than 1,800 yards from scrimmage. His only other 1,000-yard campaign came in 1976 with none of his other six seasons producing more than 489 rushing yards.

Dayne was unstoppable at Wisconsin. Logging 7,125 rushing yards and 71 touchdowns in four seasons for the Badgers, Dayne finished his career as the all-time leading rusher in NCAA history and still ranks near the top of the list. Considering his elite college production and high draft selection, Dayne’s NFL career was disappointing. While he played in the league for seven seasons, Dayne never had more than 773 rushing yards in a season and averaged 3.8 yards per carry for his career.

A freak of an athlete, Cox has proven to be one of the NFL’s most elite defensive linemen since he entered the league. So far in his nine seasons in the NFL, Cox is a six-time Pro Bowler and four-time All-Pro selection. He’s a true difference-maker and at 30 years old has shown no signs of slowing down. The Eagles will be in great shape if they hit on pick No. 12 in 2021 to the degree they did back in 2012.

A native of Germany, FitzPatrick lasted five seasons with the Chargers before he was traded to the Raiders and played two more seasons. FitzPatrick’s lone season as a primary starter came in 1987 and he was more of a backup in his five other seasons in the league. There’s a good chance we see the Chargers invest the No. 13 pick for offensive line help again in 2021, but hopefully find more of an impact this time around.

Dozier entered the NFL after scoring the game-winning touchdown in Penn State’s 1987 National Championship Fiesta Bowl win over Miami in a year that he was also a finalist for the Heisman Trophy. He lasted five seasons in the NFL and never produced more than 355 yards from scrimmage in any of his years. Dozier was also a baseball player who worked his way up to the Major League ranks where he played in 25 games for the New York Mets in 1992.

Eason was part of the legendary 1983 QB class that also produced John Elway, Jim Kelly, Dan Marino, and Ken O’Brien. While Eason won’t be regarded as an all-time great like his peers in 1983, he was New England’s primary starter in 1985 and helped guide the Patriots to its first Super Bowl appearance. Unfortunately, Eason is likely to be remembered for frequent interceptions and how often he was sacked.

Rodgers-Cromartie enjoyed a lengthy and productive career in the NFL but only lasted three seasons in Arizona as he was packaged along with a second-round pick to the Eagles for quarterback Kevin Kolb. For his career, Rodgers-Cromartie played in 162 games with 121 starts and recorded 30 interceptions and 147 pass breakups.

A year after holding pick No. 18  in the 2020 NFL Draft, Miami finds itself in the exact same spot in 2021. While his performance for the season featured its share of ups and downs, Jackson became a Day 1 starter for the Dolphins but missed three games due to a foot injury. He will look to build on his experience as a rookie and elevate his game in Year 2 as the Dolphins groom him to be their franchise left tackle.

Long’s career got off to a hot start, starting all but one game across his first three NFL seasons and being named to three consecutive Pro Bowls. Unfortunately, Long battled injuries from 2015-2019 and he retired in January of 2020. His retirement was short-lived as he signed with the Kansas City Chiefs and has a track to a starting gig on a Chiefs offensive line that will feature plenty of new faces in 2021.

Gilburg filled a backup role at offensive tackle for the Colts from 1961-1965 where he started four games across that span. He also served as the team’s punter where he averaged 41.4 yards per punt across 232 career attempts. The days of a backup offensive lineman also filling the punter role is likely a thing of the past.

Evans has been a flashy defender for the Titans at this point where he features some impressive moments where he shines as a rangy and physical second-level enforcer but Tennessee is looking for more consistency from its former first-round pick. The Titans defense took a major step back in 2020 and Evans elevating his game is critical for the unit to find some consistency.

Crable played all seven of his NFL seasons for the Jets, but two major knee injuries shortened his playing days. He was a primary starter for the Jets in the three seasons he managed to stay healthy.

What a sensational selection this proved to be! Decastro is still a stalwart up front for the Steelers’ offensive line and has been named to six Pro Bowls already in his career. Nine years into his career, Decastro is still one of the best guards in the NFL and he’s primed to earn Pro Bowl honors for a seventh consecutive season in 2021.

Darius was a productive starter for the Jaguars from 1998-2006 where he was one of the league’s most physical safeties across that stretch. He struggled to stay healthy later in his career, but he proved to be a meaningful starter for Jacksonville for a considerable amount of time, making him a draft hit.

The Browns initially converted Truax to linebacker after drafting him and he tore his hamstring on the first day of training camp in 1964. Shortly after, Cleveland traded him to the Los Angeles Rams for a second-round draft pick and the Rams moved him back to tight end. While Truax never played a down for the Browns, he went on to collect 199 receptions for 2,458 yards and 17 touchdowns in a career that spanned from 1964-1973 where he played for the Rams and Cowboys.

Ten years later, Jimmy Smith is still a meaningful piece in the Ravens’ secondary. To date, Smith has appeared in 118 games for Baltimore with 88 starts. He signed a one-year contract extension in January and is set to spend an 11th season with the Ravens where his presence enables Baltimore to play superstar Marlon Humphrey more in the slot.

The wheels finally fell off for Ingram in 2020 but he’s had a successful career. After eight productive seasons in New Orleans, Ingram was a key weapon in Baltimore’s storied 2019 campaign. Now a member of the Houston Texans, Ingram has 7,324 rushing yards and 72 total touchdowns for his career and is a three-time Pro Bowl selection.

Barnett was a mainstay in the Packers’ defense from 2003-2010 before he spent two seasons in Buffalo and one in Washington to cap his 11-year career. Across those 11 seasons, Barnett collected at least 100 tackles in eight of them and was a quality starter for an impressive stretch.

Shaw was named the NFL’s Offensive Rookie of the Year in 1970 but he lasted just four total seasons in Buffalo with three of those coming as a starter. He was a backup in St. Louis for two seasons before taking his talents to the USFL and never returned to the NFL. He finished his NFL career with a 52.9% completion percentage, 35 passing touchdowns, and 68 interceptions. Shaw threw 46 interceptions across 24 starts in his first two NFL seasons.

When the Chiefs selected Jenkins in 1995 it marked the first time Kansas City picked an offensive lineman in the first round since 1986—and things did not go well. In a career that lasted three seasons, Jenkins played in nine games with one start. His NFL playing days concluded in 1997. He was the 156th pick in the XFL draft in 2000 by the San Francisco Demons but did not make the team.

This is a fun story. Tampa Bay intended to pick Reese with pick No. 17 in the 1982 NFL Draft but they picked Sean Farrell instead because of a communication blunder. That didn’t stop Tampa Bay from landing Reese. They wanted him so badly that they traded their first-round pick in 1983 to land their guy. Reese ended up lasting just two seasons in Tampa Bay before they traded him for a 12th-round draft pick. Farrell ended up having a 10-year career, starting 106 games.

As a rookie last season, Jefferson hauled in 19 receptions for 220 yards and one touchdown. He’s expected to have a larger role in the offense in 2021 and should benefit from the Rams’ decision to upgrade at quarterback by trading away Jared Goff for Matthew Stafford. He’s a nuanced route-runner with exceptional ball skills.

Peek had a modest five-year career where he spent his first four seasons in Houston before spending his final season with the Browns. In 65 career games (28 starts), Peek collected 129 tackles and 14 sacks primarily as a reserve.