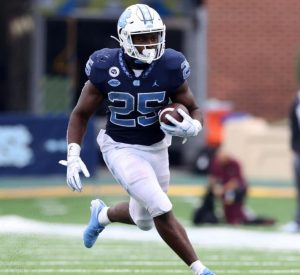 Javonte Williams grew up loving football his whole life, but he almost never played college football. Through three years of playing linebacker at Wallace-Rose Hill High School in Wallace, N.C., Williams received no FBS offers and seemed destined to hang up his cleats. But his high school coach, Kevin Motsinger, moved him to running back as a senior, and he romped for 2,271 rushing yards and 27 touchdowns.

It was enough to catch North Carolina’s attention, and so the 247Sports three-star prospect went to the Tar Heels. He split the rushing workload over the past two seasons with fellow prospect Michael Carter, breaking out in 2020 with 1,140 rush yards on 157 carries and 19 scores on the ground and 305 yards on 25 receptions with three touchdown catches. The year was so impressive that it resulted in the highest rushing grade ever given out by Pro Football Focus for a college running back ever.

Williams turns 21 years old on April 25, a mere four days before the first day of the 2021 NFL Draft.

We’re breaking down everything you need to know about Williams from a Fantasy manager perspective, including best fits, Dynasty outlook, measurables, scouting report, key stats and an NFL comparison.

Like Atlanta, Pittsburgh is a great destination for any good rookie running back. Williams’ pass protection work in college lends hope for him to adapt at the pro level quickly, which would in turn, make him a three-down candidate for the Steelers. Mike Tomlin has gravitated toward workhorse backs in the past and could very easily do so again with someone like Williams.

Any capable running back in the 2021 draft is a great Fantasy fit with the Falcons, and Williams is no exception. He can play three downs, fight for and create yardage behind an unproven offensive line and work in short-yardage situations. He’s a better version of Mike Davis, whom the Falcons signed this offseason.

Denver’s depth chart behind Melvin Gordon is pretty bare, and Gordon is entering a contract year. Williams is a lot like Gordon in that he’s a physical, tough football player with burst and good receiving skills, though he might eventually be better in pass protection. If Williams landed in Denver, he’d probably struggle to see a lot of touches as a rookie but would theoretically grow into a strong role behind an improving offensive line.

Head on over to Spotify, Apple, or wherever else you consume podcasts to follow Fantasy Football Today in 5.

If Najee Harris is the best pound-for-pound and three-down back this year, Williams is right behind him. But there’s a benefit to Williams that not even Harris can touch: He will have just turned 21 when he gets drafted. Harris, by comparison, is already 23 years old, and a full 25 months older than Williams. It’s a given that the landing spot and the other running backs on the roster will play a huge factor for Williams’ long-term Fantasy value, but if he ends up in a great spot compared to Harris, it’ll be impossible to ignore the younger back with the better path to dominant touches. Williams has dark horse 1.01 appeal in rookie-only drafts and will be a top six-or-seven pick even if he ends up in an unideal situation to begin his career.

While Williams compares himself to Todd Gurley and Alvin Kamara, I see him more as a version of Chris Carson. Both are tough, strong, compact running backs who pick up chunks of yardage after contact and have underrated receiving skills. Williams is readier for the pro game than Carson was when he came out of college, including as a pass protector, which is why it’s a cinch he’ll get picked far earlier than when Carson got taken. Williams may also be a tad bigger than Carson, not to mention younger.