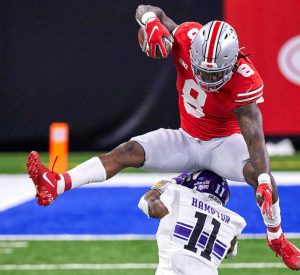 Compiling rookie rankings for Fantasy Football before the 2021 NFL Draft can seem a little bit like a fool’s errand. After all, when and where a player is drafted will have a major impact on how we view them for Fantasy purposes. But as 2020 showed, that’s not always a good thing.

Clyde Edwards-Helaire and Ke’Shawn Vaughn darted up draft boards based on their landing spots last year. Now both of them rank closer to where they were before we knew where they were going. On the flip side, some may have been worried about Justin Jefferson behind Adam Thielen in a run-heavy offense in Minnesota. Trust me, those of us who were, certainly regret it now.

That’s not to say landing spot and draft order don’t matter. As a rule, they definitely do. They just aren’t quite as important as we sometimes make them out to be.

With that in mind, I’ve put together my first draft of 2021 rookie-only Dynasty rankings. I’ve put them in tiers as well This will be updated numerous times between now and the start of the season, but I do expect there to be some continuity at the top.

Want to know more about these prospects? We have more than a dozen (and counting) prospect profiles for you over at Dynasty Fantasy Football Central.

The rankings below are based on a PPR league where you only start one quarterback. As we get closer to the draft I’ll expand the rankings to include values for superflex, non-PPR, and tight end premium leagues.

It’s hard to see anyone in this group falling out of the top-10 no matter what format you’re playing. I’m not sure the landing spot will move them much either. If you have a need I wouldn’t blame you for going Harris over Chase, and I’ll likely prefer Harris and Etienne in redraft. But if Chase hits he may have a peak that is twice as long as the running backs.

The most interesting guy in this tier is definitely Kyle Pitts. He has an athletic profile that is unlike anything we’ve ever seen. Six-foot-six, 245 pounds, with the longest reach ever measured for a receiver or tight end prospect. Did I mention he also runs a sub-4.5-40 yard dash or that he won’t be legally old enough to drink until after Week 1?

Pitts’ production in his final year at Florida (43 catches for 770 yards and 12 touchdowns in just eight games) combined with his athletic profile makes him a true one-of-a-kind prospect. While rookie tight ends are almost always a disappointment, this could legitimately be the best tight end in Fantasy for close to a decade. In one-quarterback, tight-end premium leagues he has a legitimate argument for No. 1. I’m very tempted to rank him higher in the more standard formats.

Trevor Lawrence is my only quarterback in the first round and he’s in the discussion for 1.01 in any league where you can start more than one quarterback. His career 9.0 yards per attempt is elite and he ran for 563 yards in the 2019 season as well. Lawrence is nearly three years younger than last year’s No. 1, Joe Burrow, and he may have more upside as well. The situation in Jacksonville isn’t perfect, but Lawrence’s talent should elevate each of his pass catchers.

The other thing that stands out is the lack of running backs. Only three made my top-13. That’s in part because of the format, but it’s also because of the 2020 class. We had a large number of 21-year-old backs with elite upside last year. This year we have a lot of guys who will enter the league their age or older. If it feels like the running backs were penalized more because of the pandemic, that could be true as well. It’s harder to separate running back talent from the situation, and the smaller, less reliable sample size only exacerbates that.

Two things probably stand out here. Trey Sermon as a borderline first-round pick and Justin Fields ahead of Zach Wilson. First off, no, I’m not a Buckeyes fan.

Sermon isn’t a burner, but he does have elite burst and athleticism. He also never earned a large workload, especially in the passing game. But the effort he runs with is intoxicating. That effort helped him average 6.5 yards per carry over his college career. Maybe more importantly, that effort led to a 331-yard performance against Northwestern which was followed by a 193-yard gashing of Clemson. I’m not sure Sermon will ever be a three-down back in the NFL, but that’s the case for most of this class.

Fields over Wilson is a far simpler explanation. Lawrence is the only quarterback I feel confident in as a future No. 1 in Fantasy. If I’m speculating on a second quarterback in this class I want it to be the guy with the most rushing upside, and that’s clearly Fields. Besides, it’s not like he’s been bad as a passer. He was over 9.0 yards per attempt both seasons at Ohio State and he led Power-5 quarterbacks in the percentage of his yards that came before the catch both years. Fields is definitely a better runner than Wilson. He may just be a better passer as well.

Now we’re deep into the guys for whom landing spot and draft capital could be huge. The prime example of that is Mac Jones, who’s going to become harder to ignore if San Francisco takes him at No. 3 as some have speculated. It also wouldn’t be surprising if one of these running backs jumps a couple of tiers because of where they’re drafted. But as we saw with Edwards-Helaire and Vaughn, that might be a mistake.