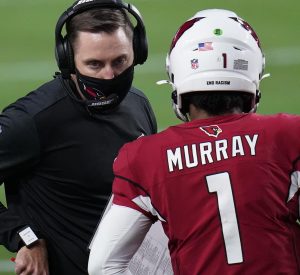 The Falcons’ job opened up this offseason after the team mercifully put an end to the Dan Quinn era, but it hardly looked like a desirable gig for the top candidates. The organization settled on Arthur Smith—the 38-year-old who jump-started the Tennessee Titans offense as its coordinator for the last two seasons—but still has much to sort out going into the draft.

Atlanta still has a load of veteran talent, including quarterback Matt Ryan and wideout Julio Jones, but it hasn’t been competitive since its epic Super Bowl collapse at the end of the 2016 season. The Falcons are coming off their worst season since 2013, having won just four games and seemingly found new ways to lose close contests.

If Atlanta decides on a full-fledged rebuild, expect it to jettison some familiar faces during the draft in exchange for young prospects and future value. The MMQB’s Albert Breer found that the Falcons have been exploring their options surrounding the No. 4 overall pick, but likely stay put and select a potential franchise QB, opening the door for Ryan’s eventual exit.

Even if Ryan remains on the roster for 2021, Smith has a chance at turning things around with the players still lingering from the Quinn days, but this is a tall task given how poorly the Falcons performed in 2020.

Regardless of which path the Falcons take, there won’t be high expectations for Smith in 2021. He’ll get some time to rework the roster to fit his vision and shouldn’t be judged until his first draft class has had at least a year to prove itself.

The excitement surrounding the start of the Matt Rhule era reached a high five weeks into the season when the Panthers won three straight games and improved to 3-2. The team fell off after that, losing five in a row and finishing an unimpressive 5-11.

Rhule still did enough during his first season to warrant more time, specifically with the quarterback position still a major question mark. The team gave Teddy Bridgewater a shot to see if he could be the answer after a successful stint as Drew Brees‘ backup with the rival New Orleans Saints, but it is now apparent that the veteran was only a temporary solution.

On Monday, Carolina traded for the New York Jets’ Sam Darnold. The club also holds the No. 8 pick, which could net it one of the better quarterback prospects on the board depending on how the earlier selections unfold.

This deal was a big step forward for the organization, giving the Panthers both a high-upside QB and the flexibility to select the best player available when they are on the clock in a few weeks. Whether that ends up being a signal-caller or not remains to be determined, but Carolina is now well-positioned to improve under Rhule in 2021 either way.

The Saints have been one of the most consistent franchises in the league over the last 15 years, largely thanks to the pairing of head coach Sean Payton and quarterback Drew Brees. A wrench was thrown into that smooth operation when Brees announced his retirement this offseason, meaning New Orleans will be without the longtime starter for the first time since 2006.

Payton—the second-longest-tenured head coach in the NFL—has amassed a 143-81 record in the regular season and delivered seven divisional titles in one of the league’s toughest divisions.

Though Payton has helped guide the Saints to nine postseason berths, he hasn’t been as successful in the playoffs. New Orleans is just 9-8 and has made only one Super Bowl appearance, winning it all in 2009.

It has been more than a decade since that magical title run, however, and the Saints have struggled to replicate anything close to that. They finally made it back to the conference championship following the 2018 campaign but lost in stunning fashion to the Los Angeles Rams, the second consecutive year in which the team was on the wrong side of a miraculous ending.

The journey back to the big game will be much more difficult without a surefire Hall of Famer. The team is likely going to turn over the offense to Jameis Winston, who re-signed on a one-year deal. While he has a chance to rehabilitate a career that hasn’t met the expectations of his status as a No. 1 pick by the Tampa Bay Buccaneers, Winston is far from a lock to keep New Orleans competitive.

After releasing numerous veteran contributors because of salary-cap constraints, the Saints need a strong draft. The team cut Kwon Alexander, Emmanuel Sanders, Janoris Jenkins, Jared Cook, Josh Hill and several other vets to get cap compliant, opening the door for the impending rookie class to play a big role for this team.

New Orleans will be asking a lot from the young players and unproven talents that will be filling out the depth chart in 2021. If the Saints fall off and miss the playoffs due to this, they could consider parting ways with Payton.

Bruce Arians finally broke through and won his first Super Bowl title last season, guiding the Bucs to a championship with his laid-back demeanor and calm presence.

While much of the credit for Tampa Bay’s resurgence deservedly goes to quarterback Tom Brady—who changed the organization’s fortunes when he signed with it last offseason—Arians played a major role in not only getting Brady to join the club but also crafting the squad into a contender after an up-and-down start to the 2020 campaign.

The Bucs went into their Week 13 bye having lost two games in a row and were in danger of missing the playoffs, but Arians used the break to rework the playbook and strategize with his superstar signal-caller. The team emerged for the better, making simple but humble changes to the playbook that resulted in eight straight wins.

At age 68, Arians is one of the oldest coaches in the league. He just became the oldest coach to win a championship and has little left to prove. It’s unknown how much longer he wants to coach, but he’s earned the right to keep his job until he retires.