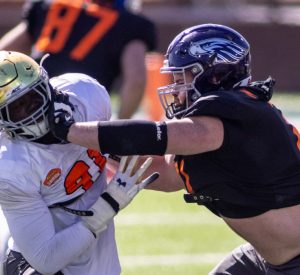 With All-Pro Corey Linsley signing with the Los Angeles Chargers in free agency, the Packers will have a new starting center for the first time since Linsley’s rookie season of 2014. Green Bay has three in-house candidates with its starting guards, Pro Bowler Elgton Jenkins and Lucas Patrick, and 2020 sixth-round pick Jake Hanson. Jenkins’ versatility might be too valuable to have him locked into center, and Hanson was not impressive during training camp.

Wisconsin-Whitewater’s Quinn Meinerz is our No. 2-ranked center.

The legend of Quinn Meinerz didn’t start at the Senior Bowl, where he turned heads as the small-school player with the big gut and flowing locks who routinely beat-up on the big-school defensive linemen.

No, it started in Canada.

A native of Hartford, Wis., who played at Division III powerhouse Wisconsin-Whitewater, Meinerz spent his summers at a fly-fishing camp at Hector Lake in Ontario, Canada. As told by UWW’s school newspaper, the Royal Purple:

The walk down to the portage is quick, as the island is small. Since everyone who arrives at the island has to come through these portages, they’re the top priority to clear. He’ll spend about 8 hours clearing trees today, so that the portages can be ready to launch fishing boats.

After that, he moves on to the next task, getting fuel to heat the cabins that make up the camp.

Hector Lake’s main island is a Fly-In fishing destination for tourists, but for Meinerz it’s his summer residence. After rolling the 400 lb. fuel tanks near the cabin, his eight-hour work day comes to a close. But that doesn’t mean there’s time to rest. He has a workout to do.

“There’s no air conditioning, and the sun goes right through the cabins and heats them up like an oven,” he told NFL.com. “Some nights I’d jump in the lake in the middle of the night to cool off, then try to go to sleep real quick before I started sweating again.”

At Hartford Union High School, Meinerz played on the football, wrestling and track and field teams. He was honorable mention all-state as a senior. Not at all on any big-school recruiting radars, he chose Whitewater – the six-time Division III national champions. He played in two games as a freshman in 2017, was all-region in 2018 and All-American in 2019. Because of his size and athleticism, he got on NFL radars as scouts came to town to check out Nate Trewyn, a lineman who has spent time with the Buccaneers and Rams.

COVID wiped out the Warhawks’ 2020 season. That might have wiped out his NFL aspirations if not for a couple fortuitous injuries. Alabama’s Landon Dickerson and Ohio State’s Josh Myers, standouts for this year’s national championship combatants, were slated to be two of the Senior Bowl’s centers. When Dickerson suffered a torn ACL and Myers needed toe surgery, the premier all-star game needed a center. So, on Jan. 14, Senior Bowl executive director Jim Nagy delivered the phone call of a lifetime.

“As a scout, (if) you put even a seventh-round grade on a D-III guy, you’re putting your reputation on the table,” Nagy told NFL.com. “In 18 years (as an NFL scout), the only D-III guy I ever put a draftable grade on was (Mount Union and longtime NFL wide receiver) Pierre Garcon.”

Nagy had nothing to worry about because Meinerz had put in the time.

A guard at Whitewater, Meinerz spent the 2020 “season” learning how to snap to a couple garbage cans behind the family’s house. He hooked up with renowned offensive line coach Duke Manyweather to learn some of the finer points of center play. Admittedly overweight in 2019, he became explosive enough to flat-foot dunk a basketball.

He took his new skill-set and physique to Mobile, Ala., and didn’t just solidify himself as a potential draft prospect. No, he built himself into a likely Day 2 prospect even while playing through a broken hand.

“It was huge,” he told The Draft Network. “Especially when you take how strange this year has been into account. I didn’t have a football season in 2020. Some of the other college all-star games were canceled. We didn’t have an East-West Shrine Game this year. The NFLPA game didn’t happen. I feel for all the prospects that missed out on those opportunities.

“Those are the games someone like me usually has to take advantage of. It gives us a chance to get in front of these scouts and prove that we can handle playing against better competition.

“The fact that I was able to get into the Senior Bowl was huge. It gave me that opportunity that so many other small school prospects didn’t get this year. I just wanted to get in front of all 32 teams and prove to them that I could play at the next level.”

Stats and accolades: In 2019, he didn’t allow a sack, hit or pressure, according to Pro Football Focus. Of course, that came against Division III foes and not Power-5 opponents.

NFL Draft Bible says: Meinerz was the biggest winner from Senior Bowl practices, skyrocketing up draft boards during the week. Meinerz had never played center before, and his fall season was canceled, yet he was one of the best players in Mobile. In fact, he broke his hand on the very first day of practice and never even flinched. He displayed unbelievable strength at the attack point and excellent athleticism. Meinerz had no trouble snapping the football and looked like a natural at his new position. Meinerz possesses Pro-Bowl potential.

Packer Central is introducing you to the top prospects, both on and off the field, in this year’s NFL Draft. The series is starting with the top five at each position, then will add additional players as the draft approaches, with a focus on positions of need.