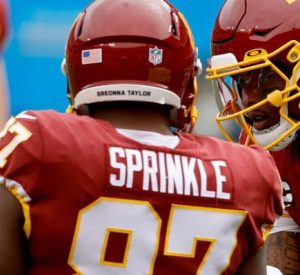 ASHBURN, Va. — The Washington Football Team has hinted to us that they do not plan on “overpaying” as shoppers as NFL free agency hits this week. That doesn’t mean they won’t be making news leading up to the draft. Updated by the minute, our WFT 2021 NFL Free Agency Tracker give you all the news coming out of FedEx Field as they prepares for the impending season …

APRIL 8: TE FROM WFT TO BIG D The Cowboys are signing former Washington tight end Jeremy Sprinkle, who will fight for a backup role with Blake Bell having signed in KC. Sprinkle, who played at Arkansas, was a fifth-round pick and is 6-5, 255. In his four seasons he’s played in 59 games, catching 34 passes for 301 yards.

MARCH 26- WFT ADD CB DEPTH With the addition of William Jackson III, Washington is set with their lead cornerbacks. Still, Jackson and Kendall Fuller will need depth behind them with the loss of Fabian Moreau.

Washington has agreed to terms with former Detroit Lions cornerback Daryl Roberts. The deal is expected to be for one year. Drafted out of Marshall in 2015, Roberts has spent time with the New England Patriots, New York Jets and Lions.

For his career, Roberts has recorded 211 total tackles, 33 pass deflections and four interceptions.

MARCH 25 – FORMER TITANS SLOT RECEIVER HUMPHRIES VISITS WFT – AND SIGNS: Adam Humphries had a meeting with Washington, per Tom Pelissero of NFL Network. … and now ESPN is reporting he’s coming on board.

The move will provide Washington a quality quartet of receivers to rely on with Humphries in the slot, Terry McLaurin and Curtis Samuel working both inside and out, while Cam Sims, Antonio Gandy-Golden and the returning Kelvin Harmon will battle it out for extra production.

Humphries, a 5-11 receiver who excels in the slot, signed a four-year, $36 million deal with the Titans in 2019, but his two years in Nashville were marred by injury issues the WFT hopes is now behind the 27-year-old.

MARCH 24: KERRIGAN VISITING THE BENGALS: It’s been quiet on the Ryan Kerrigan front. The franchise leader in sacks hasn’t generated many headlines until now. He’s scheduled to visit the Cincinnati Bengals for a free agent visit, per Ian Rapoport of NFL Network.

As John Keim of ESPN noted last week, the door is still open for a return to Washington as it always was, if he couldn’t find a starting spot elsewhere.

It was thought that the Indianapolis Colts, Green Bay Packers and Tennessee Titans would have the most interest based on previous coaching connections, but the Bengals get the first public nod.

Meanwhile, the Falcons are signing cornerback Fabian Moreau on a one-year deal. Washington selected Moreau in the third round of the 2017 draft but beyond helping on special teams, he never quite made the desired impact.

MARCH 24: HOLD UP ON RUDOLPH: Former Minnesota Vikings tight end Kyle Rudolph had agreed to a two-year deal with the New York Giants, but as reported by Mike Garafolo and Art Stapleton …the two sides have run into an issue regarding Rudolph’s foot injury from last year and the medical clearance. The deal is reportedly not dead yet.

MARCH 23: 2 RETURNEES The Washington Football Team is bringing back two of its own guys, special-team helpers Danny Johnson (a cornerback who returns kicks) and Jared Norris (a linebacker).

MARCH 23 – ANOTHER SECOND-ROUND DISAPPOINTMENT LEAVES FOR NYG: Ryan Anderson, a second-round pick in 2017  and another let down overall, was phased out of Washington’s defense in their conversion to a 4-3 has left for the New York Giants.

MARCH 22 – THAT’S ADOREE’ FOR THE GIANTS: New York has landed their second big-fish acquisition in the last three days, signing former Titans corner Adoree’ Jackson to a three-year, $39 million deal, which is a notch down from William Jackson III’s deal with Washington.

Based on reports, it looks like New York’s Jackson might be able to make more than Washington’s Jackson based on hitting all incentives.

MARCH 22 – D-JAX REUNITES WITH MCVAY IN LA: DeSean Jackson has joined the Los Angeles Rams and head coach Sean McVay. McVay was the offensive coordinator and play caller for Jackson’s tenure here in Washington and McVay would often describe Jackson’s greatest skill as his ball-tracking ability in flight.

MARCH 20 – GIANTS GET GOLLADAY: The New York Giants have struck in a significant way as they’ve come to an agreement with former Lions vertical threat, Kenny Golladay. It’s expected to be a four-year, $72+ million deal who will give Daniel Jones a deep-ball weapon.

Our WFT reaction? The Giants have long been shy of a weapon like this. Good thing Washington rebounded from the Darby departure with the signing of William Jackson III. Jackson vs. Golladay will be a fun one.

Our WFT reaction? Dallas has rarely emphasized safety play … and Neal might end up being a hybrid defender who also plays linebacker, so maybe he’s not a traditional safety at all. In any event that’s still an offense-heavy roster that needs cornerback help badly.

MARCH 19: THE EAGLES STRIKE! – The Philadelphia Eagles haven’t been able to do much but on Friday evening, they struck a reported one-year, $5 million deal with free safety Anthony Harris, formerly of the Minnesota Vikings.

At that cost, the WFT surely sniffed around … but passing could also speak volumes on how the staff feels about Jeremy Reaves, Kam Curl, Deshazor Everett and likely an early draft pick at the position.

Our reaction? Also worth noting regarding the NFC East: Where were the Dallas Cowboys on this? So obsessed with free agents Malik Hooker, Damontae Kazee and Keanu Neal that this one slipped by them?

MARCH 19: A RYAN REUNION? Ryan Kerrigan, 32, surely had a vision: Say goodbye to Washington – and to being a backup – to find a new team and a good contract elsewhere.

That hasn’t happened yet, and we will suggest that the longer he sits on the shelf, the more the door remains ajar … maybe ever so slightly … for his return to D.C.

Do both parties wait until after the top “tiers” are gone? Tiers 1, 2, 3 …? Is it an idea that wouldn’t be broached until after the WFT has gone through not only free agency but also the NFL Draft?

Kerrigan as a situational pass-rusher would, we say, still help an NFL team. There is a probably-slight chance that the team he might end up helping is the same team he was planning on leaving.

MARCH 18: WASHINGTON BRINGS IN OL DEPTH: Tyler Larsen, who was with the WFT for about six months in the 2015 offseason and training camp is returning to Washington after spending the last five seasons with the Carolina Panthers.

MARCH 18: WFT ADDS A LINEBACKER: The Washington Football Team announced that they have signed linebacker David Mayo, last with the New York Giants.

MARCH 17: BREAKING – RIVERA GETS SAMUEL: WR Curtis Samuel is signing a three-year, $34.5 million deal with Washington – and coach Ron Rivera gets his man – and a top-notch receiving mate for Terry McLaurin.

MARCH 17: ROBERT FOSTER SIGNS WITH DOLPHINS: Speedy young receiver Robert Foster, who was acquired last year after being let go from Buffalo — is heading to the Miami Dolphins, his agents announced.

MARCH 17: BYE, NICK “Unfortunately,” writes 11-year long-snapper Nick Sundberg on Wednesday morning, “Coach informed me that I’m not in the plans moving forward. I understand this is a business but I’m still sad to close this long chapter with the Washington football team. I look forward to the next opportunity in my career, wherever that may be. See you on Sundays.”

Also re-upping is backup O-lineman David Sharpe, who was acquired in trade at the start of last season.

MARCH 16: WFT GOES BIG AT CORNER – William Jackson III has agreed to a three-year, $42 million deal with the Washington Football Team, to replace Ronald Darby. The former first round pick is 28 years old.

Jackson was a stud early in his career but has been mostly good since that point. He’s been relatively healthy since being injured in his rookie season.

MARCH 15: THE ANSWER IS RYAN FITZPATRICK – Per Adam Schefter of ESPN, Ryan Fitzpatrick, the long-time veteran QB of seven different teams, last of Miami, has agreed to a deal with the Washington Football Team. It’s a one-year deal worth around $10 million.

MARCH 15: KEVIN PIERRE-LOUIS LEAVING – The speedy linebacker, who was Washington’s best in coverage is off to Houston on a two-year deal worth about $8 million.

MARCH 15: RONALD DARBY TO DENVER – What we feared in our cornerbacks preview of free agency – what would happen if Ronald Darby left Washington…

Now, we have word that’s not an if …it’s happening. Darby has reported agreed to a three-year deal worth around $30 million with the Denver Broncos, per Ian Rapoport of NFL Network.

And now we wonder: Will the WFT call Richard Sherman?

The Cowboys would love to have Dalton simply come back. But his first efforts, as free agency opens, is to be first-team.

MARCH 15: IS IT TRU? Could the WFT find a match with Mitchell Trubisky? That’s the way we see it, early on … Washington Football Team Free Agency Shopping: Positional Preview – QB’s

Our understanding is that Chicago isn’t in love with the idea of keeping him. And again, the WFT doesn’t seem very enthusiastic about paying a gigantic bounty for the likes of Deshaun Watson.

MARCH 14: POSITIONAL PREVIEWS We’ve got every group covered for you, starting here …

MARCH 13: SPEAKING OF TIGHT END We have a name as a helper … Washington ‘Not Desperate’ Help On Offense? Target Rams’ Everett

MARCH 12: THE TAGGED GUY Scherff Signs …His Tag … which means there is more negotiating to be done. But it’s a start.

MARCH 11: BRISSETT A SMART MOVE? Jacoby Brissett? We make a good argument for him as the WFT’s next QB here: Colts QB Jacoby Brissett A Washington Football Team Fit