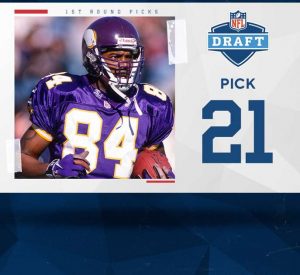 The 2021 NFL Draft is right around the corner. In the spirit of another rookie class entering the league, we here at CBS Sports decided to take a dive through history to identify the best picks at every first-round selection. Starting with the No. 32 pick and working our way all the way to No. 1 ahead of the 2021 draft, which kicks off Thursday, April 29, at 8 p.m. ET, we’re identifying the five best all-time picks at each spot.

You can find our entire rundown of picks at our hub of all-time selections, but right here, we’ll be exploring the best of the best to go No. 21 overall. This year, the Indianapolis Colts hold the pick, and you can check out who our draft analysts expect them to take here. But who struck gold using it in years past? Check it out below.

Note: Some picks that were not originally first-rounders may be included, as the NFL has expanded since the draft began in 1936. For example, the 32nd overall pick was considered a second-rounder until 2002.

Offensive linemen aren’t often sexy selections for all-time lists, and Mack is no exception: The veteran blocker has neither the blockbuster name brand of left tackles like Trent Williams nor the championship resume of legendary Hall of Famers. What he does have, however, is more than a decade of experience as one of the best to play his position. After establishing himself as an anchor on a Browns line that also featured perennial Pro Bowler Joe Thomas, Mack upped his game even more in Atlanta, where he helped revitalize quarterback Matt Ryan’s career and turn Atlanta into a Super Bowl contender.

A three-time All-Pro and six-time Pro Bowler, Mack has started all 16 games in 10 of his 12 NFL seasons, including 90 straight with the Falcons. While he was almost always solid in Cleveland, he solidified himself as one of the game’s top centers in Atlanta. His first season with the Falcons coincided with Ryan’s first and only MVP campaign, as well as Atlanta’s trip to Super Bowl LI.

Now in San Francisco, the 35-year-old Mack has another chance to add hardware to his sterling resume, taking over as the middleman for Kyle Shanahan’s run-heavy offense, which still has title aspirations after a 2019 Super Bowl appearance.

When you think of today’s elite pass rushers, you often think of the same names: Myles Garrett, Khalil Mack, Joey Bosa, T.J. Watt, Shaquil Barrett, maybe Von Miller. But did you know that Chandler Jones has more sacks than every single one of them since entering the NFL? In fact, no one has sacked QBs more than Jones since 2012. Not only that, but his 97 career sacks rank in the top 45 of all time, barely behind the career marks of guys like Miller (106) and J.J. Watt (101). While his name rarely finds the buzz of some of his pass rushing peers, he’s been a Grade-A starter for nearly a decade.

A two-time All-Pro and three-time Pro Bowler, Jones has posted double-digit sack marks in six of his nine seasons, leading the NFL with 17 in 2017 and besting that total in 2019, with 19. He’s also been a tackle-for-loss machine, six times logging double-digit totals in that category and leading the NFL once, with 28 in 2017. A Super Bowl champion with the Patriots in 2014, his New England career was curiously short-lived after the Pats traded him in the wake of an off-field incident. But he’s been nothing but an elite annual performer in Arizona.

Now paired with J.J. Watt, he should only continue climbing the all-time leader board.

Unlike Chandler Jones, Wilfork was never a sack artist on the defensive line. But he didn’t need to be. A behemoth on the interior, he instead dominated trenches for more than a decade with a gap-plugging, run-stuffing presence that trickled into the rest of his championship-caliber defenses. A model of both durability and physicality up front, Wilfork missed just six games in his first nine seasons, anchored a pair of Super Bowl-winning Patriots defenses and retired as one of the top interior D-linemen to ever suit up.

Wilfork finished his career, which closed with two seasons in Houston, with just 16 total sacks. But his impact elsewhere was undeniable: His 559 career tackles epitomized his reliability on the inside, where he long served as New England’s 3-4 nose tackle, then transitioned to more of a hybrid defensive tackle into his 30s. A four-time All-Pro and five-time Pro Bowler, he was especially busy in a career 2011 season, when he paired 52 tackles and 3.5 sacks with two interceptions, two fumble recoveries and 11 quarterback hits.

Also named to the Patriots’ honorary 50th anniversary team, Wilfork will be remembered not only for his massive size, but the way he leveraged it to lead defenses for more than a decade.

Look at his numbers today, and they don’t necessarily pop. But during his era, he helped pace receiving production as one of the top targets on a Steelers dynasty. A major piece of one of the best draft classes in team history — the same one that produced greats like Jack Lambert, John Stallworth and Mike Webster — Swann made an impact from the jump and never let up. After leading the NFL in punt return yardage as a rookie, he established himself as a No. 1 wideout and became one of the most productive pass catchers in Super Bowl history.

A three-time All-Pro and Pro Bowler, Swann didn’t lead the NFL in catches or receiving yards more than once (his 61 receptions for 880 yards ranked first in 1978), but he gets a boost on this list for how good he was when it mattered most. A 2001 Hall of Fame inductee, he was crowned Super Bowl X MVP for dropping 161 yards and a touchdown on the Cowboys in a title-winning effort. He also retired with the most all-purpose yards (398) in Super Bowl history, claiming three other Lombardi Trophies in Pittsburgh. A member of the NFL’s 1970s All-Decade Team, he had five 700+ yard seasons from 1975-1980, peaking as a deep threat in 1979 when he averaged nearly 20 yards per catch.

They don’t get much better than this. Whereas Lynn Swann is immortalized through the Steelers’ turn as a dynasty, Moss is immortalized through his own sheer play-making ability. While he became somewhat of a journeyman after his first stint in Minnesota, encountering both highs and lows during stops in Oakland, New England and Tennessee, Moss was never not a game-changing presence — a big-play threat who required opposing defenses to plan around him. Named to the NFL’s 100th anniversary team, he still ranks second in all-time receiving scores (156), fourth in all-time receiving yards (15,292) and 15th in catches (982).

A four-time All-Pro and six-time Pro Bowler who entered the Hall of Fame in 2018, Moss paired a showy personality with a showier skill set, five times leading the NFL in receiving TDs and opening his career with an astounding six straight 1,200-yard seasons. He also set the NFL single-season record for receiving scores when he caught 23 TDs from Tom Brady on the Patriots in 2007, the year New England went 16-0 in the regular season. A 1,000-yard wideout in 10 of his first 12 seasons, Moss hit double-digit TDs nine times and peaked with 1,632 yards in 2003 with the Vikings. In other words, he was one of the game’s very best for years.

Why is he No. 1 here? The numbers should speak for themselves. Only Jerry Rice, Terrell Owens and Larry Fitzgerald have more career yardage out wide. More than that, though, Moss wasn’t just padding empty stats. He was constantly threatening teams with his talent, not to mention — at his best — making teams like Minnesota and New England true contenders.