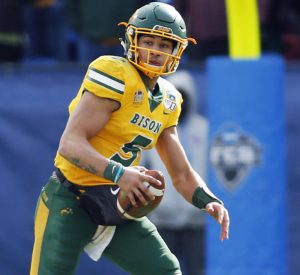 Big-time college football recruiters thought so much of Trey Lance’s quarterbacking skills out of high school that they all wanted him to move to linebacker, or safety, or wide receiver. Not what the former three-sport high-school star was hoping for. But Lance didn’t want to change positions — he wanted to be a quarterback despite being a lanky kid out of Marshall Senior High School, about 2.5 hours west of Minneapolis. One school fell in love with Lance: North Dakota State, who recruited Lance on the heels of turning Carson Wentz into a top-2 pick in the NFL Draft.

Lance accepted — and proved them right a year later. As a redshirt freshman, Lance passed for 2,786 yards and 28 touchdowns in 16 games, adding another 1,100 yards and 14 touchdowns on the ground. He also set an NCAA record for throwing the most passes (287) without a single interception in a season. It was more than enough to earn him the Walter Payton Award for the best FCS-level player in 2019. He’s the only person ever to get it as a freshman.

Lance’s remaining time in school was heavily impacted by Covid-19. The Bison played one game in the fall of 2020 (vs. Central Arkansas), opting for a spring schedule instead. Lance played in the game, a showcase of sorts for him, but seemed rusty in the first half before rebounding in the second half for a win. He declared for the draft after that.

We’re breaking down everything you need to know about Lance from a Fantasy manager perspective, including best fits, Dynasty outlook, measurables, scouting report, key stats and an NFL comparison.

Most quarterback-needy teams have a veteran ready to start Week 1. They don’t need to put a rookie on the field right away. Lance’s terrific athleticism and strong arm combined with a successful training camp could leapfrog him over Drew Lock in time for the start of the season, something that’s tough to envision with other clubs. Moreover, Lance would be in the saddle with one of the league’s youngest and most promising receiving corps and a pretty solid offensive line. His fastest track to Fantasy stardom also happens to be the one with the best long-term prospects.

Is there a better quarterback to help prepare and groom a strong, versatile, two-way threat passer than Cam Newton? On top of the coaching he’d get from Bill Belichick and Josh McDaniels, Lance would have a relatable mentor in Newton while learning the game from the sideline. Lance also could take over for Newton sooner than later, giving him a clouded-but-not-restrictive path to playing time. Lance has the mature mental makeup that’s perfect for the Patriots, too.

Fantasy managers would have to be pretty patient if Lance heads to Atlanta because Matt Ryan isn’t giving up his throne so quickly. Lance may very well take the same path Patrick Mahomes did to playing time and not be heard from until very late 2021 or Week 1 of 2022. But pairing Lance’s incredible tools with Arthur Smith’s adaptability mantra could one day create some incredible statistics.

The Steelers pick 24th and would have to give up a LOT to move high enough to draft Lance, but it would be fantastic if they did. Like with Atlanta, and a bunch of other teams, Lance would wait for a year before taking over. Ben Roethlisberger isn’t going anywhere so long as his arm holds up. But the long-term idea of Lance slinging it to young receivers like Diontae Johnson and Chase Claypool is awfully fascinating. That would be a lot of athletic talent for defenses to deal with.

Head on over to Spotify, Apple, or wherever else you consume podcasts to follow the Fantasy Football Today in 5 podcast.

Fantasy managers have learned to prioritize quarterbacks who put up rushing stats. Lance has done plenty of that. Paired with his immense ceiling as a passer, there’s incredible upside here. And it gets better: Lance won’t be a prioritized pick in a rookie draft that’s pretty deep. Only in a two-QB or deep Superflex dynasty league would Lance even get considered with a top-10 overall pick. But he might make it to the middle of Round 2 or even Round 3 in one-QB formats. That’s unreal value for a guy who has the better-than-raw skills to be a great Fantasy passer.

If given time to learn the game from coaches who know it well and set him up in an offense he’s comfortable with, Lance has a very good shot at being a weekly starter. If he can also graduate from the Josh Allen School of Improved Accuracy, then he’ll have the upside to be one of the most productive quarterbacks in the league.