Home » NFL Rookies » Will the Saints fill their need at cornerback in the 1st round of the NFL draft? | Saints 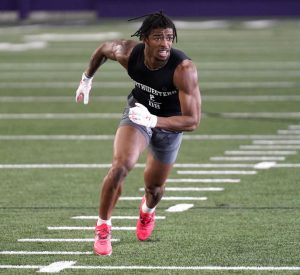 They don’t usually tip their hand and publicly identify those areas, but it is probably safe to say cornerback is one of their top priorities as they continue to fill out their roster before the 2021 season.

Janoris Jenkins, who tied for the team lead with three interceptions while starting opposite Marshon Lattimore, is now a Tennessee Titan after the Saints released him in a salary cap saving maneuver.

Lattimore is entering the final year of his rookie contract, and the only players with legitimate NFL experience behind him are Patrick Robinson, who has missed 22 games the last three seasons, and P.J. Williams, whose value is mostly tied to his versatility.

Considering the position they are still in with relation to the salary cap (as of this writing, NFLPA records have them with just $1.4 million in cap space, the least in the NFL), the Saints will almost surely use some of their draft capital on cornerbacks.

The question is when.

For the last several seasons, New Orleans has fortified a deep roster by drafting the best player available, not worrying about reaching for a player to address a need. They could take a slightly altered version of the same approach this year, as they have a few more soft spots than usual on their current roster after making a flurry of moves to become compliant with the salary cap.

But it could just work where some of the best available prospects when the Saints’ turn comes around at No. 28 are cornerbacks. Only two — Alabama’s Patrick Surtain II and South Carolina’s Jaycee Horn — are locks to be drafted before the Saints are on the clock.

Here are a few potential options for the Saints at the back end of the first round.

Opposing offenses didn’t have much success when throwing against Newsome last season.

On plays in which he was targeted in coverage, Newsome posted the best passer rating allowed of any cornerback in the 2021 draft class, allowing just 12 completions on 34 targets for 93 yards (a 31.7 NFL passer rating). Just one of those completions came 10 or more yards downfield, and he did not allow a single completion of 20-plus yards.

“Starts with the mentality,” Newsome said at his pro day. “I’m a very confident player and I think if I eliminate those deep routes nobody is gonna beat us. Just knowing where my help is coming from and my teammates are doing their jobs, I don’t want to let the team down.”

He only recorded one career interception at Northwestern (against Wisconsin last season), but was credited with 20 pass breakups in his final 15 collegiate games.

The main concern with Newsome is his durability: He missed parts of his first two seasons at Northwestern with injury, then sat out the Wildcats’ bowl game last season to focus on the NFL draft after injuring his groin in the Big-10 championship.

Start with the name, which should sound familiar if you’ve been watching the NFL for a while. His father, Asante Samuel Sr., made four Pro Bowls in an NFL career that spanned more than a decade.

Then go to the game. He picked off four passes and broke up 20 in his final 20 college football games (he opted out midway through his junior season), showing a knack for finding the football and making a play on it.

Samuel is an aggressive player who is not afraid to stick his nose in the mix as a run defender, the type of mentality the Saints covet in their defenders.

If you’re a Saints fan you won’t want to miss this newsletter. Sign up today.

The main concern about him as a prospect is his size. He stands 5-foot-10 and weighs 180 pounds, both of which fall on the smaller side.

Still, Samuel frequently lined up against players bigger than him during his time at Florida State and after a rough stretch in his freshman season, mostly held his own.

When Samuel spoke about his physical proportions, he brought up Green Bay Packers Pro Bowl corner Jaire Alexander, who entered the NFL roughly the same size as Alexander and has since become one of the NFL’s better man-coverage corners.

And if the Alexander comparison doesn’t do it for you, his father was about the same size too, and he finished with 51 interceptions in an 11-year NFL career.

“I feel like size doesn’t matter; it’s about the heart, and the dog mentality you have on that field,” Samuel said.

Farley is a bit of a wild card for a couple reasons.

He would’ve never appeared in this article if it was written a month ago, because the assumption was he’d be long gone before the Saints picked. Most considered Farley neck and neck with Surtain as the best corner prospect in the draft, and he figured to be gone within the first 15 picks.

But then Farley had back surgery last month, forcing him to sit out his pro day workout — which was a bigger deal than usual, because Farley opted out of the 2020 season and has just 23 games of college film for NFL scouts to analyze.

Farley was eager to discuss his discectomy surgery at his pro day. He said it was a result of an injury he suffered while deadlifting last year. In a previous surgery after the original injury, the doctor fixed one herniated disc and chose to leave a bulging disc to heal on its own.

“It was something I was informed in and trusting that it was just post-operating surgery and would go away over time,” Farley said at his pro day. “I did a great job managing over a year but that bulge is still in my S1 (disc) and unfortunately I irritated it a month ago, which caused me to pull back on my training.

“I was trying to cut back and manage the inflammation to come out here on Pro Day and put up some crazy numbers but … we were advised it would be best to go ahead and fix this problem so I will be ready for training camp and ready for the season. It was not a reoccurring disk or anything like that.”

Farley is optimistic, but are NFL decision makers? The combination of Farley having not played live football since 2019 and the uncertainty brought on by his recent surgery could push him down draft boards — if not all the way to No. 28, maybe far back enough for the Saints to make an aggressive move for him.

And if he is indeed healthy for training camp? Farley has everything the Saints like in their corners. He is big (6-2, 205), physical, confident, excels in man coverage and has a nose for the ball. The converted wide receiver and prolific high school quarterback broke up 19 passes and intercepted six in his 23 college football games.

He has the longest odds of these three to make it to New Orleans, but if he did he would be an outstanding complement to Lattimore to combat the receiver-rich NFC South.

Syracuse CB Trill Williams: Williams did a little bit of everything for Syracuse, playing on the boundary, in the slot and at safety in his three years there. He opted out midway through the 2020 season after trying to play through a torn ligament in his ankle. After offseason surgery, Williams ran an unofficial 4.42-second 40-yard dash at 6-foot-2 and 198 pounds.

Oregon CB Thomas Graham: Graham is a former top recruit who flashed a lot of play-making ability with the Ducks (32 passes defended, 8 interceptions) before opting out of the 2020 season. He had a nice week at the Senior Bowl, his first game action since 2019, which probably helped his stock.

Michigan CB Ambry Thomas: After a breakout junior season in which he recorded three interceptions, Thomas opted out of the 2020 campaign. He showed off excellent athleticism at Michigan’s pro day, with a 4.37-second 40-yard dash and a 37-inch vertical leap.

Ohio State CB Shaun Wade: Will the Saints add another Buckeye to the pipeline? Wade might’ve been a first-rounder if he left for the NFL after his redshirt sophomore season, but his play dipped in 2020 when the Buckeyes asked him to play on the boundary.

Disclosure: These are affiliate links, meaning, at no additional cost to you, NOLA.com may earn a commission on purchases made via clicks on those links.