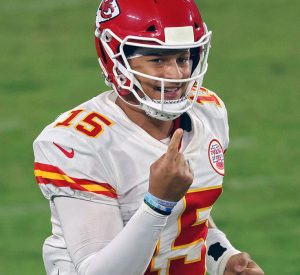 Here’s how the NFL describes how the matchup for the 17th game is determined:

The NFL used its interconference formula from the 2019 schedule to determine the matchups between the divisions to avoid any team playing each other twice. The NFC East will play the AFC East, the NFC North will play the AFC West, the NFC South faces the AFC South, and the NFC West plays the AFC North. The league will use the 2020 scheduling formula to determine the 2022 matchups, so these divisions won’t face each other every season. The AFC plays host this year while the NFC plays host in 2022.

With the matchups for the 17th game official, let’s take a look at the five best the league has to offer for the 2021 season:

The Colts have one of the greatest comebacks in NFL history against the Buccaneers, but that’s not why this matchup is intriguing. Tom Brady and the Super Bowl champions are heading to Lucas Oil Stadium and facing one of the most talented rosters in the AFC. In case you haven’t heard, the Colts have a new quarterback in Carson Wentz.

Wentz and Brady have squared off once, which wasn’t one of Wentz’s best performances. Playing for the Philadelphia Eagles, Wentz completed just 50% of his passes for 214 yards and a touchdown in a 17-10 loss to the New England Patriots in 2019. Good chance he’ll have a better performance with Indianapolis, as this matchup with Tampa Bay has the makings of a shootout.

Admit it, when’s the last time you remember Seattle playing Pittsburgh? Probably Super Bowl XL when the Steelers won their fifth Super Bowl title in a 21-10 victory over the Seahawks. There’s some history behind the matchup, but both teams have only met five times (not counting the postseason) since Seattle moved from the AFC to the NFC.

Russell Wilson and Ben Roethlisberger have only faced off against each other twice in their careers — and Roethlisberger left the 2019 matchup with an elbow injury that ended his season. This may be the last time the two future Hall of Fame quarterbacks square off, so enjoy this one.

Side note: Wilson has eight touchdowns without an interception in his career against Pittsburgh.

This is a matchup the NFL doesn’t see often, and it’s a must-watch game for fans. The Rams had the No. 1 defense in the league last year and will face a serious challenge in Lamar Jackson — who threw for five touchdown passes on only 20 attempts in a 45-6 rout. Los Angeles’ defense is much better this time around, so it will be interesting so see what Jackson and the Ravens offense have in store.

Los Angeles also has Matthew Stafford, which makes the Rams favorites in the NFC. This is a statement game for both teams — as they’ll see where they rank among the best in the league.

These are two teams that have plenty to prove in 2021. Dallas lost Dak Prescott last season and missed the playoffs, finishing third in the NFC East, while New England had a losing record for the first time since 2000 — when Tom Brady was a backup quarterback in his rookie year. Can Bill Belichick make the playoffs in New England without Tom Brady? Can the Cowboys actually live up to the hype and compete for a Super Bowl?

This is a game fans will tune in to see Prescott against one of the NFL’s most talented defenses. The biggest question for the Patriots will be who eventually starts at quarterback? That will be determined in time.

Both teams have a combined 11 Super Bowl victories between them. This is a game the TV networks will covet.

Easily the best matchup of the bunch here. How can it get any better than Aaron Rodgers vs. Patrick Mahomes as the two MVPs square off for the first time (Mahomes missed the 2019 meeting with an ankle injury).

This has the makings of an offensive shootout in prime time — and actually would be an excellent Week 1 matchup to cap off an exciting weekend of football. Rodgers and Mahomes would be healthy and at their best, which is potentially a Super Bowl preview.

Once the 17th game and matchups were revealed, this was the game everyone had circled on their calendar. This is a gift for all NFL fans.