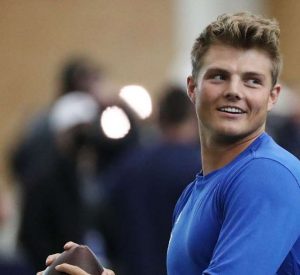 In less than three weeks, Zach Wilson’s life will forever change when he is taken in the 2021 NFL draft as an expected early first-rounder.

© Jeffrey D. Allred, Deseret News
Quarterback Zach Wilson throws during BYU pro day in Provo on Friday, March 26, 2021. Wilson is expected to be taken No. 2 overall by the New York Jets in the upcoming 2021 NFL draft, according to most national experts.


The prevailing belief is that Wilson, the former BYU and Corner Canyon High quarterback, will be headed to the New York Jets with the No. 2 overall pick (the draft begins April 29 and ends May 1), especially after the Jets recently traded away their starting quarterback from the past three seasons, Sam Darnold.

If Wilson ultimately heads to New York, what awaits him with the Jets? New York is coming off a 2-14 season and last had a winning record in 2015. It’s been more than a decade since the franchise last made the playoffs, when it lost in the AFC conference championship in back-to-back years in 2009 and 2010.

The team is on its third head coach in four years, as former San Francisco 49ers defensive coordinator Robert Saleh replaced Adam Gase this offseason after Gase went 9-23 in two campaigns. Saleh brought along with him former 49ers passing game coordinator Mike LaFleur — who’s a part of the Kyle Shanahan coaching tree — to be the Jets’ offensive coordinator.

In addition to owning the No. 2 pick in this year’s NFL draft, New York has 10 picks in the first three rounds of the next two drafts. These picks will help define the legacy of general manager Joe Douglas, who took over as the team’s GM in the summer of 2019.

This year, the Jets have these five picks in the first three rounds:

That leaves New York and Douglas plenty of assets to build a young team around Wilson. With the offseason well underway, the Jets have already made several moves in building their 2021 team. Here’s what the Jets’ current offensive personnel looks like.

With the 23-year-old Darnold being dealt to the Panthers, that signaled a new quarterback era for the Jets. Darnold, the third overall pick in the 2018 draft, never flourished in New York, leaving with a 13-25 record as starting QB while completing 59.8% of his career passes for 8,097 yards, 45 touchdowns and 39 interceptions. He gets a chance in Carolina to revive his career.

Wilson would inherit an offense that finished the 2020 season worst in the NFL in total offense, averaging 279.9 yards per game — one of only two teams below a 300-yard average — and just 4.7 yards per play.

Gone, too, is veteran backup Joe Flacco — he’s now with the Philadelphia Eagles — leaving the team with two young quarterbacks currently on the roster, but neither Mike White nor James Morgan have ever taken a regular-season snap.

With Flacco’s departure in free agency, New York needs a reliable veteran in the quarterback room. A potential candidate for that role emerged earlier this week when NFL Network’s Ian Rapoport reported that Brian Hoyer is set to meet with the team.

Interesting free agent visit on tap today: #Patriots QB Brian Hoyer is set to visit the #Jets, source said. A long-time backup in New England emerges as a potential backup and mentor to the new rookie QB at NYJ.

The 35-year-old free agent, who’s been in the NFL for over a decade, was with the New England Patriots last season.

Last year’s leading rusher, the 37-year-old Gore, is now a free agent after he rushed for 653 yards and two touchdowns in 2020. That leaves the team’s top returning rusher as second-year back La’Mical Perine, who had 232 rushing yards — on a 3.6 per-carry average — and two touchdowns last season.

The team is getting some running back help in Coleman, who previously played for the 49ers and is plenty familiar with Saleh and LaFleur. Coleman missed almost all of 2020 with knee problems, though he’s just three years removed from an 800-yard rushing season with Atlanta. He joined the Jets on a one-year, $1.1 million deal, per Spotrac.

If New York wants to look at young running backs early in this year’s draft, some of the top prospects at the position include Clemson’s Travis Etienne, Alabama’s Najee Harris and North Carolina’s Javonte Williams.

The Jets have been busier at the wide receiver position than other spots this offseason, and that starts with the addition of the former Tennessee Titan Davis, whom New York signed to a three-year, $37.5 million contract, per Spotrac. The 6-foot-3 Davis had nearly 3,000 receiving yards in four seasons with the Titans and is coming off a career year with 65 receptions for 984 yards and five touchdowns. He should step into the No. 1 receiver role in New York.

The Jets also added another young receiving weapon in Cole, who went undrafted in 2017 but had 55 catches for 642 yards and five touchdowns last year for the Jacksonville Jaguars. He could be a good addition to the passing attack, at the least solid depth. He put up similar numbers to what Perriman, who left for Detroit in free agency, did for Jets last season.

Those two join Jamison Crowder, the team’s best offensive weapon last year, and second-year man Denzel Mims. Crowder, who had 59 catches for 699 yards and six touchdowns last year, is in the final year of his contract and will be paid $10 million in 2021, per Spotrac, while Mims had 357 yards receiving on 23 receptions as a rookie.

The Jets don’t have much at the tight end position, and their only addition of note is Kroft, who had 42 receptions for 404 yards and seven touchdowns for Cincinnati in 2017. Other than that, though, he’s rarely provided consistent pass catching abilities during his six years in the NFL.

Florida tight end Kyle Pitts has been tabbed by some to be the best player in this year’s draft, though if the Jets go for Wilson at No. 2 as expected, they’d have no chance of snagging Pitts without trading back up into the top 5. Beyond Pitts, other top tight end prospects in this year’s draft include Notre Dame’s Tommy Tremble, Penn State’s Pat Freiermuth, Boston College’s Hunter Long and Miami’s Brevin Jordan, if the Jets want to go that route in the early rounds.

The Jets lost a pair of players this offseason from their offensive line in Pat Elflein (to Carolina) and Josh Andrews (to Atlanta), who both had a handful of starts in 2020, though neither is a huge loss. Likewise, Feeney joining New York didn’t create a huge buzz, though he could challenge for a starting position on the interior of the Jets’ line.

New York’s top lineman is second-year offensive tackle Mekhi Becton, the team’s top draft pick in 2019. Before buzz began that the Jets would likely go with a quarterback, there was speculation the team may be interested in Desert Hills High’s Penei Sewell at No. 2, which would have given them a pair of young promising tackles. Still, Becton was the bright spot on the Jets’ line last year, finishing 19th among 38 qualifying left tackles with a 74.3 grade from Pro Football Focus.

New York could use even more help on the line — Pro Football Focus rated the Jets as the fourth-worst offensive line in the league last year, and the team gave up 43 sacks. New York was also among the NFL’s worst in yards per carry (4.1, sixth worst).