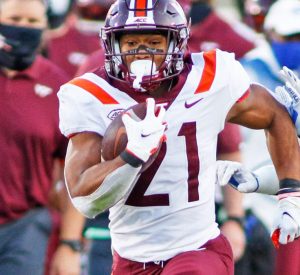 Khalil Herbert is a bit of a late-blooming running back prospect whose breakout didn’t come until the 2020 season after transferring from Kansas (where he first arrived in 2016) to Virginia Tech. But don’t let his age, diminutive size (which actually works his favor, but more on that later) or late breakout lead you astray, Herbert can ball and in my mind, he’s the most underrated prospect at his position in the entire class.

Herbert is used to being underrated and unheralded. He never topped 1,000 rushing yards in any season out of American Heritage High School in Plantation, Fla., so he entered CFB as a three-star RB recruit (247Sports). In fact, Kansas was his only Power Five offer. While Herbert showed some signs at Kansas, his breakout came at Virginia Tech once he got into the right system and environment. Some may view that negatively, but I take the opposite approach, leaning instead on his untapped upside.

We’re breaking down everything you need to know about Herbert from a Fantasy manager perspective, including best fits, Dynasty outlook, measurables, scouting report, key stats and an NFL comparison.

I really like Herbert as a one-cut-and-go runner, so that naturally makes him a near-perfect fit for Kyle Shanahan’s system in San Francisco. In addition to joining a system that fits his skill set, Herbert would be joining a plus offensive line with a tried-and-true run blocking scheme from an effectiveness standpoint. And while the 49ers did extend Raheem Mostert last offseason, they like to rotate RBs.

Although he at one point looked like a likely long-term fixture in Pittsburgh, James Conner remains unsigned and unlikely to return to the Steelers. If Herbert joins this backfield, his main competition will be Benny Snell and Anthony McFarland. Herbert’s patience, quick and choppy footwork and vision are somewhat reminiscent of Le’Veon Bell, and this would make him a nice system fit as well.

Herbert’s age, late breakout in college and size will all be used against him in the Dynasty community. I get it — it’s the nature of the game, and generally speaking, prospects who have those factors working against them have to be outliers to succeed. But let’s not leave out the fact that Herbert has legit mid-4.4s speed and game speed that allows him to break away easily on film. You’ll likely be able to grab Herbert at the back end of your rookie drafts overall, and he’s a prospect I’ll be looking to acquire in every rookie draft.

When I watch Herbert, who earned the nickname “Juice,” and it’s not hard to see why, I see shades of former Jaguars RB Maurice Jones-Drew. He’s not quite as powerful in the lower half as MJD was, and he’s not quite as fast, but he has similar traits to the ones that made Jones-Drew such a special back in the NFL for a short period.