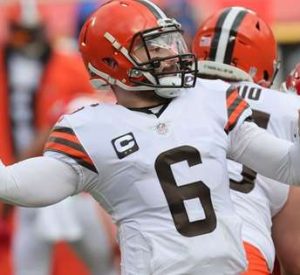 CLEVELAND, Ohio — How fortunate are the Browns that they’re not playing this league-wide game of musical quarterback chairs this offseason or pinning their hopes and dreams on one of the top prospects in the NFL Draft?

It’s been a particularly bad year for quarterbacks drafted in the top five in that span, with four of them getting the boot this offseason from the team that drafted them: Jared Goff, Carson Wentz, Mitch Trubisky and Sam Darnold, all selected from 2016-2018.

2009 No. 1 overall pick Matt Stafford also left his original team, but the Rams acquired him in a trade with the Lions for Goff to upgrade the position.

The latest top five QB to be sent packing was 2018 No. 3 overall pick Sam Darnold, who was traded last week by the Jets to the Panthers for a sixth round pick in 2021 and a second- and fourth-rounder in 2022. With many experts mocking Darnold to the Browns at No. 1 in 2018, the trade was a reminder of just how difficult it is to get it right on a franchise QB.


Wentz, the No. 2 overall pick in 2016, was traded from the Eagles to Colts, where he’ll be reunited with his former Philly offensive coordinator Frank Reich, and Trubisky signed a one-year deal with the Bills to back up Josh Allen.

So while four or five teams could draft a quarterback in the top five on April 29th, this 10-year period of QBs drafted in the top five should serve as a cautionary tale. It should also make the Browns and their fans happy they drafted him in 2018. Here are some facts about the not-so-fab 14:

5. Mark Sanchez (Jets) — He helped lead the Jets to the AFC Championship in each of his first two seasons, but fizzled thereafter and was released after the 2013 season. He signed with the Eagles and started the second half of the season, but was a backup for three more teams before retiring after the 2018 season.

1. Sam Bradford (St. Louis) — Bradford was plagued by torn ACLs in back-to-back years and was never the same. He lasted five years with the Rams, but never led them to the playoffs. He was traded to the Eagles and later to the Vikings, but never lived up to his No. 1 status or mammoth contract. He finished with a 34-48-1 record and 84.5 rating

1. Cam Newton (Panthers) — Newton lived up to his lofty draft status more than anyone else on this list. He was NFL Offensive Rookie of the Year in 2011, and NFL MVP in 2015. He was also a first-team All-Pro in 2015, and a three-time Pro Bowler. He led Panthers to a 15-1 record in 2015, and to Super Bowl 50, where they lost to the Broncos. Injuries plagued him in 2018 and 2019, and his nine years in Carolina came to an end. He’s heading into his second year with the Patriots, and hoping for a comeback.

1. Andrew Luck (Colts) — Like Newton, Luck was well worth the No. 1 overall pick, but injuries derailed his career. He made four Pro Bowls and took his team to the playoffs four times, including the AFC Championship Game once. He went 53-33, throwing 171 TDs against 83 interceptions en route to an 89.5 rating. He announced his retirement in 2019 after seven seasons because of injuries.

2. Robert Griffin (Washington) — Griffin started out with a bang, earning NFL Rookie of the Year honors in 2012 and making the Pro Bowl that year. But he suffered a torn ACL and LCL in a wildcard playoff loss, and it marked the beginning of the end. He last four years in Washington, and has a career record of 16-26. He signed with the Browns in 2016, but suffered a shoulder injury that cost him most of the season. Currently a free agent, he spent the past three seasons as a backup in Baltimore.

3. Blake Bortles (Jaguars) — Bortles lasted five seasons in Jacksonville, where he compiled a 24-29 record. He was released in 2019 and has been a backup for the Rams and Broncos.

1. Jameis Winston (Bucs) — Winston showed some promise early on, making the Pro Bowl as a rookie, but was mostly considered a bust. He finished with a 28-42 and failed to lead the Bucs to the playoffs in his five seasons there. He had one winning season in 2016. He’s now trying to make a comeback with the Saints.

2. Marcus Mariota (Titans) — No playoffs and no Pro Bowls for Mariota, who went 29-32 in his five years in Tennessee. The Titans committed to Ryan Tannehill after the 2019 season, and Mariota is now a backup with the Raiders.

1. Jared Goff (Rams) — For the first few years, Goff seemed well worth the No. 1 overall pick. He made the Pro Bowl twice, led the team to the Super Bowl after the 2018 season (where they lost to the Patriots 13-3) and signed a blockbuster $134 million extension after his third season. But it unraveled from there, and he and McVay were at odds last season. Despite his 42-27 record, they traded him to the Lions, and he’ll try to rebuild his career.

2. Carson Wentz (Eagles) — Like Goff, Wentz seemed destined for a long and successful career in Philly from the jumo. He made the Pro Bowl in 2017, going 11-2 with 33 touchdowns and only seven interceptions before suffering a torn ACL and missing out on the Super Bowl victory. Plagued by injuries, he finished with a 35-32-1 mark, including 3-8-1 in 2020. In Indy, Reich will try to rekindle the magic he had with Wentz in 2017.

2. Mitchell Trubisky (Bears) — Trubisky made the Pro Bowl in 2018, and it appeared looked like the Bears might have their man. But he lost in the wildcard round to the Eagles that year, and didn’t progress as hoped. The Bears declined to pick up his fifth-year option, and he became a free agent after another wild card loss in 2020. Finishing with a 29-21 record, he signed with the Bills and will try to regroup behind Josh Allen for a year.

1. Baker Mayfield (Browns) — Mayfield is the last man still with his original team from this group. He had a shaky 2019 under Freddie Kitchens, but rebounded in a huge way under Kevin Stefanski last year, going 11-5 and leading the team to the divisional round agains the Chiefs, where the Browns lost 22-17. Mayfield is due for a contract extension this offseason, but will at least have his fifth-year option picked up. The Browns’ future looks bright with him at the helm.

3. Sam Darnold (Jets) — Darnold floundered on a bad Jets team, going 13-25 and earning a 78.6 rating. One of his two victories last season was over the covid-ravaged Browns. Darnold did show some promise in 2019, going 7-6 and earning an 84.3 rating, so perhaps he’ll rebound with the Panthers.

Picking 26th in the draft: The unfortunate, the infamous and the forgotten

Riding out a tornado, frustrating calls and the draft – Pluto

If the Browns draft a linebacker, who should GM Andrew Berry target?

What free agent additions told us about culture, winning and Mayfield