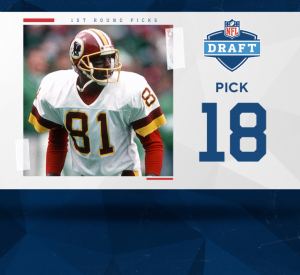 There have been 85 players selected with the 18th overall pick in the NFL Draft. Typically, the 18th pick belongs to a team that finished on the playoff bubble the previous season, and while many of the draft’s top prospects are typically gone by then, there have been several productive NFL players who were had there.

We’re breaking down the best draft picks of all time at each spot from 32-1. The entire rundown can be found at our hub of all-time selections. This year, the Dolphins are picking 18th, and our draft writers have pointed to prospects like Oklahoma State offensive tackle Tevin Jenkins, defensive lineman Kwity Paye (Michigan), and linebackers Zaven Collins (Tulsa) and Jeremiah Owusu-Koramoah (Notre Dame) as players who could go there.

There have been several notable players taken with the 18th overall pick. Defensive lineman Melvin Ingram (2012) was selected to three straight Pro Bowls from 2017-19. Chad Pennington quarterbacked two different teams to the playoffs while winning NFL Comeback Player of the Year on two separate occasions. Running back Napoleon Kaufman (1995) had a brief run of success in Oakland. Pass rusher Alfred Williams (1991) was a key cog on Denver’s back-to-back championship teams in the late ’90s. Fellow linebacker Thomas “Hollywood” Henderson (1975) helped the Cowboys win one Super Bowl and three NFC titles. And while he elected to play for the AFL’s Chiefs, running back Mike Garrett was selected by the Rams with the 18th pick in the 1966 draft. The speed of receiver Willie Gault (1983) helped the ’85 Bears win the Super Bowl.

As good as those players are/were, they did not make the cut as one of the top five players taken with the 18th pick. Here are the five players who did, starting with a former Super Bowl MVP we didn’t want to leave out; he makes our list as our honorable mention.

While his status an an elite quarterback was seemingly always in question, Flacco is a former Super Bowl MVP who has playoff wins over Tom Brady, Peyton Manning and Ben Roethlisberger on his resume. During his 11 seasons in Baltimore, Flacco went 96-67 in the regular season and 10-5 in the postseason. Flacco was at his best during the 2012 playoffs. In four games, he threw 11 touchdowns and zero interceptions. He threw three touchdowns in Super Bowl XLVII to lead the Ravens to a 34-31 win over the 49ers.

Pouncey is the latest in a lineage of stellar Steelers centers. And the center who started it all, Ray Mansfield, was drafted with the 18th pick in the 1963 draft. A member of the NFL’s All-2010s Team, Pouncey was a Pro Bowler in each of his nine healthy seasons with the Steelers. With Pouncey leading the way, the Steelers boasted one of the league’s most explosive offenses during the 2010s. Pouncey’s blocking led to individual success for Roethlisberger, running back Le’Veon Bell, and receivers Antonio Brown and JuJu Smith-Schuster, among others.

Instead of signing with the Steelers, who drafted him, Johnson spent the 1953 season in Calgary before teaming up with Y.A. Tittle, Hugh McElhenny, and Joe Perry in San Francisco for the ’54 season. After three years with the 49ers that included his first Pro Bowl berth in 1954, Johnson helped the Lions win the NFL title during his first season in Detroit. Johnson’s career came full circle when he signed with the Steelers in 1960. He enjoyed his most statistical success in Pittsburgh, where he selected to the Pro Bowl each year from 1961-63. In 1962, Johnson led the Steelers to their best season in franchise history at that time. He was inducted into the Hall of Fame in 1987.

A dominant two-way player, Kinard earned All-NFL honors during his first seven seasons. After a one-year hiatus to serve in the military, Kinard joined the Yankees of the newly formed All-American Football League. That season, he became the first player to earn All-League honors in the NFL and in the AAFL. A 1971 Hall of Fame inductee, the 216-pound Kinard missed just one game due to injury. In retirement, Kinard spent 23 seasons as an assistant coach at Ole Miss. He then spent two years as the school’s athletic director.

Krause was drafted one spot behind fellow Hall of Fame defensive back Mel Renfro. One of the best ball-hawking defenders in league history, Krause’s 81 interceptions are the most in NFL history. An All-Pro in each of his first two seasons, Krause led the NFL with 12 interceptions as a rookie. He had nine seasons where he picked off at least five passes. Krause played an integral role in the Vikings winning the 1969 NFL title. He also played a key role in all three of the Vikings’ NFC championship teams. An eight-time Pro Bowler and three-time All-Pro, Krause was inducted into the Hall of Fame in 1998.

Monk helped usher in a glorious era of football in Washington. A member of the NFL’s All-1980s Team, Monk helped Washington win three Super Bowls and four NFC titles. A Pro Bowler each season from 1984-86, Monk led the NFL with 106 receptions in 1984. Monk was the leader of several talented receiving groups in Washington that included the “Fun Bunch” that helped Washington win its first Super Bowl. In Super Bowl XXVI, Monk and teammate Gary Clark each caught seven passes (for 113 and 114 yards, respectively) while helping lead Washington to its third Super Bowl title. A 2008 Hall of Fame inductee, Monk is Washington’s all-time franchise leader in career receptions (940), yards (12,721) and touchdowns (68). In 15 playoff games, he caught 69 passes for 1,062 yards and seven touchdowns.