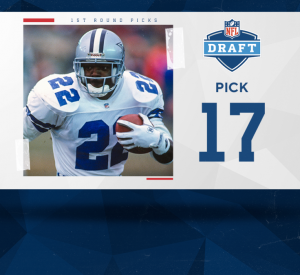 The middle of the first round in the NFL Draft is where teams get creative, whether they maneuver up the draft board to snag the best player available or pass on a potentially great player and trade down to fill multiple needs. This is where we lie with the No. 17 overall pick, a selection that has produced its fair share of NFL greats.

Having the No. 17 pick has its merits, even if the pick is a wild card (most picks in the middle of the first round are). Based on the history of the No. 17 pick, a team is more than likely to find a solid NFL starter that turns out to have a long career than a player that barely lasts three seasons in the league. Teams are more likely to find a C.J. Mosley or Doug Williams at No. 17 than they are a Reggie Brown (all former No. 17 picks).

The No. 17 pick has produced its fair share of Hall of Famers. At CBS Sports, we have been ranking the best draft picks of all time by each number — you can check out our picks at every spot, 32-1, here — and will continue to do so all the way to No. 1. How we determined who made the five best draft picks at No. 17 was a combination of their impact to the league, longevity, accolades, and — more simply — a gut feel of whether or not they are worthy of entering this conversation (making the Hall of Fame is a good start).

This year, our CBS Sports draft experts have Georgia linebacker Azeez Ojulari, Penn State linebacker Micah Parsons, LSU wide receiver Terrace Marshall Jr. and South Carolina cornerback Jaycee Horn at No. 17 (the Las Vegas Raiders currently have the pick). Will any of those players join these legends at No. 17? Let’s take a look at the top five:

Wright was one of the original “shutdown corners” in the NFL, a leader of the “Orange Crush” defense in 1977 that led the Broncos to their first Super Bowl (Denver finished third in points allowed and had the No. 1 run defense that season). Wright was one of the best run-stopping cornerbacks of his era, earning five Pro Bowl appearances and two All-Pro selections in 1978 and 1979.

Of Wright’s 26 interceptions, 15 came after age 30. He was named to the 1970s Pro Football Hall of Fame All-Decade Team. While never becoming a finalist for the Hall of Fame, Wright was the Broncos’ best defensive player in the famed 1986 AFC Championship Game (“The Drive”) and his five Pro Bowls are tied for fourth-most in franchise history by a defensive back.

If you’re looking for the catalyst toward Shaun Alexander’s MVP season in 2005, look no further than Hutchinson. Alexander rushed for 1,880 yards and an NFL-record 28 touchdowns with Hutchinson paving the way on a dominant Seahawks offensive line. When Hutchinson departed to the Vikings in free agency after that 2005 season, Alexander never eclipsed 1,000 yards in a season again.

Hutchinson started 123 consecutive games from 2003 to 2010, a run which he earned seven straight Pro Bowl appearances and five All-Pro honors. Hutchinson was selected to the NFL All-Decade Team of the 2000s and is responsible for Alexander and Adrian Peterson breaking their franchise records for rushing yards in a season.

Hutchinson is just one of 18 guards in league history to earn five All-Pro selections, all of which are in the Hall of Fame. He was inducted in 2020.

The first exclusive guard to enter the Pro Football Hall of Fame gets the nod over Hutchinson here, even if both have the same number of All-Pro selections (five) and Pro Bowl appearances (seven). Upshaw started in 207 consecutive games as the best player on a Raiders offensive line that paved the way for two Super Bowl championships in 1976 (Super Bowl XI) and 1980 (Super Bowl XV).

Upshaw is the only player to start on championship teams in the AFL and NFL (the Raiders won the 1967 AFL title) and was selected to an all-league or all-conference team for 11 straight seasons from 1967 through 1977. A member of the Pro Football Hall of Fame All-Decade team of the 1970s, Upshaw was a elected to the Hall of Fame in 1987 on his first try. He is also a member of the NFL 100 All-Time Team.

One of the early greats in the excellent history of the Cowboys, Renfro was a star at safety and cornerback — making the Pro Bowl in his first 10 seasons in the league. Renfro is one of just five defensive backs to earn 10 Pro Bowl selections in NFL history, and the first to accomplish the feat. He has just one All-Pro selection to his name, but Renfro’s impact on the franchise is far greater.

Renfro’s 52 interceptions and career 26.4-yard kickoff-return average are still Cowboys records. Renfro led the NFL in punt-return yards and kick-return yards in his rookie season. Renfro led the NFL with 10 interceptions in 1969 and was the MVP of the 1971 Pro Bowl. He played in eight conference title games and four Super Bowls, winning two in 1971 (Super Bowl VI) and 1977 (Super Bowl XII)

Inducted into the Hall of Fame in 1996, Renfro’s 52 interceptions are tied for 26th in NFL history (was tied for eighth all time when he retired). Renfro was one of the most underrated players of his era and arguably the best safety in the 1960s before moving to cornerback in 1970 — where he earned four Pro Bowl selections at that position.

There may be a debate on who is the greatest running back in NFL history, but Emmitt Smith is right in the middle of that conversation. The NFL’s all-time leading rusher with 18,355 yards, Smith is the only player to amass 17,000 career rushing yards. He led the NFL in rushing yards four times (in a five-year span) and rushing touchdowns three times (in a four-year span).

A member of the All-Decade Team of the 1990s, Smith rushed for 1,000 yards in a season an NFL-record 11 consecutive times. The 1993 NFL MVP, Smith was an All-Pro four times and made the Pro Bowl eight times. Smith’s postseason success can not be ignored, as he holds NFL records for career rushing yards (1,586), rushing touchdowns (19), consecutive games with a rushing touchdown (nine), and 100-yard rushing games (seven).

The Super Bowl XXVIII MVP in 1993, Smith rushed for more than 100 yards in two Super Bowls and was the best player on the Cowboys dynasty in the 1990s — the first team to win three Super Bowls in a four-year span. Smith’s legacy in football immortality will be hard to top — as he’s one of the best to ever play the game.