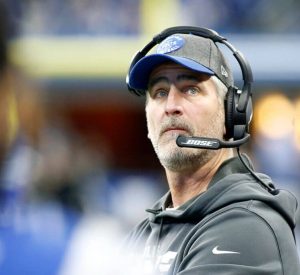 The Indianapolis Colts hold the 21st pick in the NFL Draft when it kicks off with Round 1 on April 29. The Colts own six selections overall in the seven-round draft.

See how every pick in the seven-round NFL Draft is scheduled.

Colts’ needs in the draft

Offensive line: Anchored by All-Pro guard Quenton Nelson, Pro Bowl center Ryan Kelly and right tackle Braden Smith, this unit is one of the strongest in the league. But the retirement of steady longtime left tackle Anthony Castonzo has left a void that wasn’t filled in free agency. This could be where the team looks to use the 21st pick if it gets a shot at someone like Virginia Tech’s Christian Darrisaw or possibly Oklahoma State’s Teven Jenkins. Should the Colts go another direction with their top pick, left tackle would almost certainly be the second-round selection, which would put them more in the market for Notre Dame’s Liam Eichenberg or Stanford’s Walker Little.

Edge rusher: If offensive tackle isn’t the first pick, then this will be. The Colts are strong up the middle but have a perennial need to find someone to get to the passer. Their recent draft efforts to fill this role haven’t produced a consistent disruptor yet. Kemoko Turay should get a shot to start this year, so he could emerge, but Tyquan Lewis has become more of a rotational player and Ben Banogu just hasn’t panned out. Georgia’s Azeez Ojulari, Michigan’s Kwity Paye and Miami’s Jaelan Phillips could be options at No. 21. Should they wait until the 54th pick, Texas’ Joseph Ossai or Houston’s Payton Turner could be the way to go. That said, there are still free agents who could fill the role, including the possibility of veteran Justin Houston returning to the team.

Tight end: Reich likes playmaking tight ends, and while he has strong run blockers in Jack Doyle and Mo Alie-Cox, he’s missing a weapon like he had in Zach Ertz with the Eagles. Reich’s last playmaking tight end was Eric Ebron’s first year in Indianapolis, 2018, when he caught 13 touchdowns. There won’t be any obvious dynamic tight ends at the Colts’ first pick (Florida stud Kyle Pitts will be long gone by No. 21), and it’s very unlikely they’d use either of their top two picks on one anyway, but it’s possible they’ll look for a gem on the third day.

• 2020: WR Michael Pittman, pick No. 34. The big target showed signs of being a difference-maker in his rookie season but spent three games on IR and scored only one touchdown.
• 2019: CB Rock Ya-Sin, pick No. 34. Started 21 games over the past two seasons but has been an inconsistent performer so far.
• 2018: G Quenton Nelson, pick No. 6. Arguably the best guard in the NFL after being named first-team All-Pro in his first three seasons.
• 2017: S Malik Hooker, pick No. 15. Had solid seasons in 2018 and 2019 but injuries derailed him. Currently a free agent after appearing in only two games in 2020 and is not expected to return to the Colts.
• 2016: C Ryan Kelly, pick No. 18. Has become a stalwart on a strong offensive line and has been named to two straight Pro Bowls.