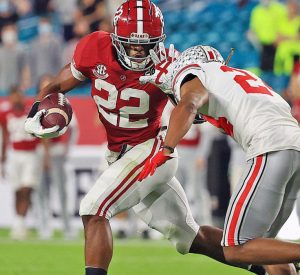 Releasing wideout John Brown represented the most noticeable loss, yet Emmanuel Sanders was brought in to replace him in Buffalo’s high-powered, pass-happy offense. The result is a roster set almost identical to the one that scored 500-plus points during a 13-3 regular season and advanced all the way to the AFC title game.

That means Buffalo has positioned itself to add depth pieces in the draft. But not every selection made by Beane and Co. will be relegated to a backup role in 2021. Here’s the five-step plan for the Bills to ace their 2021 draft.

Step 1: Take prospect who makes instant impact at No. 30

The Bills are in win-now mode. Win-Super Bowl-now mode. Because of that, even though they’re picking in the back end of Round 1, they’re decidedly in the market for an instant-impact rookie.

But after taking a quick glance at the roster, it’s challenging to find room for such a first-year player. However, there’s no stipulation that an instant-impact rookie needs to be a focal point of the offense or defense. Buffalo has a top-of-the-AFC roster right now. The goal in this draft — particularly at pick 30 — is to find someone who can supplement the offense or defense to make it a Super Bowl-champion roster.

And that could be one of the following: a corner — preferably long and athletic — to push Levi Wallace for the starting job opposite Tre’Davious White or a pass-rushing specialist on the outside to add to the group of Jerry Hughes, Mario Addison, A.J. Epenesa, Efe Obada, and Darryl Johnson.

Oh yeah and can’t forget about running back. Yes, a running back in Round 1. In 2021, a year after the Chiefs probably regret picking Clyde Edwards-Helaire at No. 32 overall. Why? Because for the Bills, that position has the strongest likelihood of moving the needle in 2021. The run-blocking was average in 2020, and Devin Singletary and Zack Moss are low center of gravity backs who aren’t easy to bring to the turf. But they both ran well into the 4.60s at their respective combines, so a field-flipping play occurring on a run isn’t likely if those two remain the top — and essentially only — viable options in the backfield.

While emerging as one of the teams clearly understanding the importance of passing volume and efficiency, Buffalo could round out its offense right now with a versatile back in Round 1. Altogether, these are the realistic options at No. 30 who’d fit the instant-impact mold, even if their role wouldn’t be gigantic in 2021.

Farley should he an immediate selection if he falls to No. 30 overall because of his back injury. He’s my CB1 in this class because of his length, athleticism, recovery speed, and receiver-like ball skills. It’d be worth it for the Bills to roll the dice on the injury front if he’s there late in Round 1.

Oweh would represent the most risk at the edge spot because he’s not yet close to being refined using his hands, however, he’s a chiseled, explosive mover around the corner. Newsome and Stokes would give Buffalo’s defense the length and explosive it could use on the perimeter of the secondary. Samuel is smaller, but I love his instincts and ball awareness and believe Sean McDermott and Leslie Frazier would too.

Step 2: Don’t be shy about wide receiver, even if he needs a year to develop

While the Bills should load up to win a Super Bowl this season, they can’t totally ignore the future, especially with Josh Allen not turning 25 until late May.

Speaking of ages, Cole Beasley turns 32 right before the draft. He’s on the final year of his contract in Buffalo. Emmanuel Sanders is 34 and agreed to a one-year contract with the Bills. Sure, Stefon Diggs is clearly in the prime of his career, and 2020 fourth-round pick Gabriel Davis had a fine rookie campaign.

But the Bills were either in a three, four, or five receiver set on 88% of their offensive plays in 2020, per Sharp Football Stats, easily the highest figure in the league. Therefore, sustaining a strong and deep receiver room is crucial.

Given the current state of the receiver room — arguably the best in the NFL — that rookie receiver wouldn’t have to hit the ground running. But I do believe Buffalo has a type. Offensive coordinator and Allen have come to adore quick, polished separators who play bigger than their size thanks to at least adequate leaping talent and natural ball skills.

I’m in the minority that believes the Bills have to address the interior of their offensive line in this draft, and should do so relatively early. Because Feliciano and low-key important piece Ike Boettger were retained it’s easy to assume the guard position is set, especially when the return of 2019 second-round pick Cody Ford enters the equation.

To put it bluntly, none of Feliciano, Boettger, or Ford are game-changers, and they typically waver from average to liability. Check the AFC title game film to see Feliciano have severe issues with Chiefs interior rusher Chris Jones.

Boettger has grown well in Buffalo’s program as a former undrafted free agent, but he’s limited athletically and as a power player. Ford has never been consistently good at any spot he’s played in his first season and change in the NFL. All that points to a Day 2 interior blocker getting drafted by the Bills. And we can’t forget about center Mitch Morse who had to agree to a pay cut to stay in Buffalo for 2021.

Here are some names to keep tabs on (likely round availability in parentheses.)

On the surface, Milano signing that surprising four-year deal to stay in Buffalo would indicate the Bills are completely set at linebacker. They are. In 2021. And they could be after that.

Tremaine Edmunds does a lot that doesn’t make the stat sheet in Buffalo’s defense. He’s a blanket in the middle of the field at nearly 6-foot-5 with offensive tackle length and has routinely showcased good range as a tackler. But he’s clearly become second-fiddle to Milano in terms of play-making ability, and in 2022 his salary is going to jump to nearly $13 million. After that, it’s lucrative extension time or a sudden need at middle linebacker.

Buffalo smartly added a bunch of veteran linebackers on one-year deals this offseason, but for a team without any clear-cut holes, the future of linebacker spot should be addressed with a mid-to-late round prospect at that position.

Also, the ambiguity between linebackers and strong safeties today makes “second-level defender” a more sizable need now given the recent loss of depth safety Dean Marlowe, a steady albeit unspectacular hybrid who’d spent his entire six-year career with McDermott up until this point.

Jordan Poyer turns 30 a few days before the draft. Micah Hyde is 31 in late December. They’ve represented one of if not the most reliable, multi-faceted safety tandem during McDermott’s time in Buffalo. But acquiring depth behind the interchangeable safeties is important for Buffalo. Even if it’s more about 2022 and beyond. Here are some mid-round options who could eventually fill the linebacker/safety role for the Bills.

Werner is a former safety who, given when he’s likely to be picked, might be my favorite value linebacker in the entire class. He can really cover. Nasirildeen and Deablo are legitimate linebacker/safety hybrids already. McDuffie really flies around the second level and has the skill set to become a quality coverage linebacker. Much of the same can be said for McGrone, although his 2020 was less impressive than his 2019 for the Wolverines.

Forrest is one of the most explosive safeties in the class and has plenty of experience as a traditional free safety or an in-the-box type. Stevens does too and brings it as an athlete as well. Webb is a fascinating slot defender because he’s crazy long and was only a part-time player at Georgia. It feels like his best football is in front of him.

Step 5: Strengthen the interior of the defensive line

The most underrated need for the Bills in this draft is at defensive tackle. Ed Oliver is ready to erupt in Year 3 given the return of space-eater Star Lotulelei. I really believe that. He’ll be allowed more opportunities to simply get upfield and win with his lightning-quick first step and deceptive power.

After those two, Buffalo’s staring at tweener Vernon Butler, Harrison Phillips, and Justin Zimmer at defensive tackle — a good group but not about which to get super excited.

We know McDermott loves rotating up front on defense to keep bodies fresh in a given game and throughout the season and playoffs. It is a weak defensive tackle class, but there’s still a chance the Bills can find an upgrade at defensive tackle on the second or third unit.