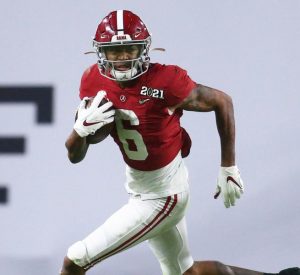 The 2020 NFL Draft was headlined by a class of strong receivers. How will the 2021 class follow it up?

A dynamic wideout can change the whole outlook for an offense, and teams at the top of this year’s draft could be looking to jumpstart their passing attacks in the first round. While the top three picks are expected to be quarterbacks, with the Jacksonville Jaguars slated to take Trevor Lawrence first overall, the New York Jets in line to take a QB at No. 2 and the San Francisco 49ers trading up to No. 3 in a blockbuster trade with the Miami Dolphins, a receiver could go high on April 29.

Here are some of the key questions surrounding the 2021 NFL Draft receiver class along with the top players at the position:

Who is the top rated receiver in the 2021 NFL draft?

After LSU produced 2020 NFL Offensive Rookie of the Year Justin Jefferson last year, another LSU star is expected to be the first receiver off the board this year. Ja’Marr Chase went off in the Tigers’ 2019 championship season, hauling in 84 receptions for a whopping 1,780 yards and 20 touchdowns across 14 games. He capped off his spectacular season with nine catches, 221 yards and two touchdowns in the national title game against Clemson. Chase opted out of the 2020 season, but he is still in line to be the first wideout off the board this year.

How many receivers are expected to be drafted in the first round?

Six wideouts were selected in the first round of the 2020 draft, beginning with Henry Ruggs III at No. 11, but the 2021 class is not nearly as deep. This year, three receivers are good enough to warrant top-10 selections, but there could be a dropoff once those three players are off the board. Better teams at the bottom of the first round might be eager to add a young weapon for a veteran quarterback, so a couple more players could get taken before the second round gets underway.

The San Francisco 49ers have gone with a receiver early in each of the last two drafts, selecting Deebo Samuel early in the second round in 2019 and using a first-round pick on Brandon Aiyuk last year, but they are heading in a different direction this year. They packaged four picks, including three first-rounders, to move up from No. 12 to No. 3 in the 2021 draft, signaling that they will be taking a quarterback with their first pick. While they are likely going with a quarterback in the first round this year, they are certainly in play to select a wideout in a later round that could help their new signal caller.

Chase’s stats listed above speak for themselves. He compiled more receiving yards and touchdowns in 2019 than Jefferson, the top rookie in the entire NFL last season. Even with a couple of rival Alabama Crimson Tide wideouts on his heels, Chase is the premier pass catcher in this class.

The numbers are hard to ignore for the 2020 Heisman Trophy winner. He torched opposing secondaries for 117 catches, 1,856 yards and 23 touchdowns last season, capped off by a show-stopping 12 catches, 215 yards and three touchdowns against Ohio State in the national championship game. The other noticeable number for Smith is 170, which is how many pounds he weighed in at during his Alabama pro day. Smith acknowledged the figure and believes it is something he can overcome at the next level, but it is certainly something NFL teams will take into account when gauging how high he will go in the top 10.

Who knows how spectacular Waddle’s season would have been had he not suffered a near-season-ending ankle injury last October? He actually outpaced Smith in receiving yards over Alabama’s first four games, reaching at least 120 yards in each contest and was able to return for the national title game. Waddle is one of the true speed demons in this receiver draft class and will likely be selected in the first half of the first round.

Bateman went through a roller-coaster 2020. He initially opted out of the season before opting back in once the Big Ten decided to bring football back in the fall. He then opted out after five games, amassing 36 catches, 472 yards and two touchdowns. He could still end up as a first-round selection, but after posting underwhelming numbers compared to his 2019 season, he could slide to the second round.

Marshall was able to step up for the Tigers in 2020 after Chase opted out of the season. He led the team with 48 catches and 10 receiving touchdowns, with his best game coming at Missouri, where he posted season highs with 11 catches, 235 yards and three TDs. At 6-foot-4, he could be an intriguing option for a team seeking a vertical threat.

Toney stuffed the stat sheet over his final three games with the Gators in 2020, picking up eight-plus catches, 100-plus yards and a touchdown in each contest. He also offers ability in the running game and return game, adding a touchdown in each department last season. Toney is a playmaking threat who could help a team in the second round of the draft.

Don’t let the 5-foot-9 stature deter you from Moore. The Boilermaker went viral for his vertical and 40-yard dash at his pro day in March to get into the national spotlight. His receiving production peaked in 2018, when he caught 114 passes for 1,258 yards and 12 touchdowns before he was hampered by injuries in 2019 and a shortened schedule in 2020. His explosiveness could be a nice addition for a team on the second day of the draft.

Moore can become a steady slot option in the NFL. His numbers grew with each season at Ole Miss as he finished with 86 receptions, 1,193 yards and eight TDs across just eight games in 2020. Coming from the same program as DK Metcalf and A.J. Brown, Moore has the opportunity to continue the Ole Miss receiver legacy.

Brown finished his college career with back-to-back 1,000-yard seasons for the Tar Heels. He projects to be a deep-ball threat, but his catching ability is questionable. Still, expect a team to select him on the second day of the draft for his big-play ability.

Wallace couldn’t reach the heights of his 2018 stats over the last two seasons with the Cowboys. He reached 903 yards in 2019 and 922 last season after going off for 1,491 in his sophomore campaign. Oklahoma State has produced standout wideouts in the past, such as Dez Bryant, Justin Blackmon and James Washington, but Wallace will likely fall to the second or even third day of the draft.

Max Molski contributed to this story.