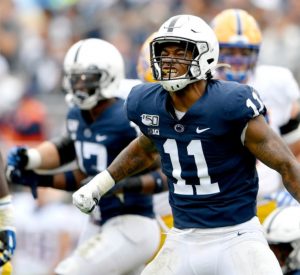 The Green Bay Packers have a promising young tandem at inside linebacker with last year’s rookie duo of undrafted Krys Barnes and fifth-round pick Kamal Martin. While they had solid debut seasons, can either become a legit difference-maker? Can either be even on par with Blake Martinez? Regardless of the top of the depth chart, the Packers are a man down after releasing veteran Christian Kirksey.

Penn State’s Micah Parsons is our No. 1-ranked prospect.

“His first year was the funniest because he was just a big kid and he didn’t really know all the plays but he would just tackle everybody,” Terrence Parsons, Micah’s father, told the Daily Collegian. “The defense, the offensive players, his teammates, he just liked to be out there on the field, like you would literally have to pull him off because he just wanted to be out there.”

There is practically a 0 percent chance his NFL career will begin with the Green Bay Packers. Simply put, Parsons is one of the great linebacker prospects in years.

“I just feel I’m the most versatile player in this class,” he said at Penn State’s pro day. “I can play middle linebacker, I can play outside and I can pass rush. There’s no place I can’t play and utilize my skills. I’m going to make plays at the next level just like I did at Penn State.”

Parsons is, indeed, the total package. At 6-foot-3 and 246 pounds, he has prototypical size. With 4.36 speed in the 40, he’ll be one of the fastest players on the field, regardless of position. An All-American in high school and in college, he’s got killer credentials.

“An assassin never gets caught,” Parsons said. “You don’t even know he is there. He is a perfectionist.”

That doesn’t mean Parsons is a perfect prospect. A controversial suspension during his junior year in high school led to Parsons switching schools. He was labeled “college football’s most polarizing recruit” by 247Sports.com, a prospect overflowing with talent and drama.

“Committed and decommitted and then committed back again, and I think at some point, there was some coaches and players questioning if we ought to go on this rollercoaster,” Penn State coach James Franklin said. “I haven’t had one person question the rollercoaster since he showed up on campus.”

As a true freshman in 2008, Parsons started only one game but became the first player in school history to lead the team in tackles as a freshman. In 2019, he was a consensus first-team All-American and the Big Ten’s linebacker of the year. Before his decision to opt out, bigger things were in store in 2020, with defensive coordinator Brent Pry poised to use Parsons as a chess piece-type of player.

“I’m pleased with his development to this point,” Pry said. “He’s eager, he’s determined, and that never wavers. He’s one of those guys that you want to cover the best back, the best tight end and off the edge; you’d like to have him in a couple of different places, so maximizing what he can do for us every snap is essential.”

Despite opting out, his two-year tally of six forced fumbles is tied for seventh in school history.

Parsons was the American Family Insurance Defensive Player of the Year at Harrisburg (Pa.) High School and the Butkus-Fitzgerald Linebacker of the Year for Penn State in 2019. In Harrisburg, he excelled at everything – even bowling.

Stats and accolades: A starter in 2019, Parsons was a consensus first-team All-American and the Big Ten’s linebacker of the year after piling up 109 tackles, five sacks, 14 tackles for losses, five passes defensed and four forced fumbles. He missed only five tackles for a missed-tackle rate of just 4 percent, according to Sports Info Solutions. In coverage, he gave up 5.4 yards per target, according to SIS.

NFL Draft Bible says: Parsons shows great change of direction, fluid agility and flies to fill the gap while swarming to the football. He likes to play chess with opposing quarterbacks by giving them different looks and lots of pre-snap gyrations. Parsons possesses excellent speed and quickness when dropping back in coverage. Before opting out, the Penn State staff had discussed utilizing him on the edge in 2020, as he owns some pass-rush skills during his time at defensive end/running back in high school. Parsons is a generational type of talent that could arguably play any position, but forecasts as a true MIKE linebacker with his comfort level breaking down the huddle, making the calls on the field and leading his men into battle.

Packer Central is introducing you to the top prospects, both on and off the field, in this year’s NFL Draft. The series is starting with the top five at each position.