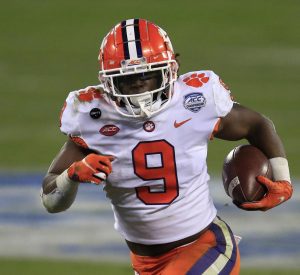 With four picks in the top 50, the Miami Dolphins stand to become a much stronger football team in the 2021 NFL draft.

It’s not guaranteed, though.

Utilizing those picks to find the best fits for their roster and the right value for each pick is still important. In the draft, it can be just as important to avoid potential disappointments as it is to identify franchise-changing prospects.

Every prospect comes with some downside. Even presumed No. 1 pick Trevor Lawrence has some nits you can pick in his game. But other prospects come with larger levels of risk.

Whether it’s an injury-riddled past, a non-conventional frame or a lack of positional value, here are a few prospects the Dolphins should be avoiding when they are on the clock.

Prepare the controversial-take alarm: The Dolphins would be much better suited to take Kyle Pitts, Ja’Marr Chase or Penei Sewell than DeVonta Smith with the sixth pick. One of the three should be available and will provide the same upside with less risk.

The production for Smith is off the charts. He’s coming off one of the most prolific seasons in college football history. There’s a strong chance he becomes a perennial Pro Bowler.

However, when compared with the other players who could be available with the sixth pick, Smith is a riskier option.

Smith’s unorthodox frame (6’0″ and 170 pounds) is something rarely seen in the NFL. There have been smaller receivers who have succeeded, but they are much more compact. Whether Smith’s frame can withstand the rigors of an NFL season are a question mark, even if his prodigious talent makes it worth the risk.

Chase, Sewell and Pitts do not possess a similar question about their fit in the NFL. Sewell is a prototypical left tackle, Chase had similar production to Smith at LSU and has an NFL body while Pitts is an offensive weapon who brings tons of potential to the table.

Should Smith somehow fall to the Dolphins’ second pick in the first round (18), he would be under consideration, but taking Smith with safer, equally appealing options available at No. 6 would be a mistake.

This one is less about Etienne as a prospect and more about where the Dolphins would be projected to take the Clemson product. There are better options than targeting a running back with the 18th pick overall.

That’s one first-rounder, two second-rounders, a third-rounder and an undrafted free agent. Long story short, there’s going to be value for the Dolphins to find outside of the first round. There’s no doubt the Dolphins backfield would be better with a running mate for Myles Gaskin, but there are going to be impact players available at more valuable positions with the 18th pick.

Etienne is a great, well-rounded back who was among the best at creating chunk plays in college. But Gaskin is a good receiver in his own right (41 catches in 2020) and will likely split carries with whoever they bring in.

The Dolphins would be better off targeting a potential starter in the front seven or offensive line with the 18th pick and taking someone like Memphis running back Kenneth Gainwell in the later rounds.

As the draft moves into the second round the Dolphins could look to beef up their linebacking corps. Jerome Baker is a star in the middle, and the team traded for Benardrick McKinney, but they didn’t invest too much in the deal.

Dylan Moses is a prospect who makes some initial sense, but when you start digging into his profile as a prospect, the shine fades fairly quickly. Few people have seen their stock drop as time goes quite like Moses.

He came to Alabama as the 13th-ranked recruit in his class and was in the national spotlight as early as the eighth grade, when he was initially offered by LSU.

Moses ultimately went to Alabama and has experience on some great defenses, but a torn ACL in 2019 and issues in coverage are two red flags for linebackers in today’s game. Moses can get handsy in coverage to compensate for a lack of fluidity in his hips.

In short, Moses hasn’t really lived up to the high expectations that came with his collegiate career. His coverage skills could make him a penalty machine at the next level, and he doesn’t necessarily have the physicality to be a between-the-tackles thumper.

He’s not a good fit for what the Dolphins need in the middle of the defense.